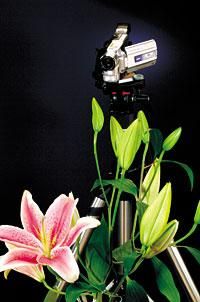 We’ve all seen them – in the high school science film illustrating how a flower blooms in just ten seconds, or the fast-rolling clouds found in the dramatic opening sequence of a big-budget Hollywood spectacle. Since the beginning of the video era, and in fact since cinematography itself was born nearly a century earlier, time-lapse shots have been a staple special-effect in movies, TV shows, commercials and just about all other moving image forms. And, whether you knew it or not, you can create time-lapses for your videos.

Yes, with nothing more than a camcorder, a tripod and a healthy dose of patience, you can shoot time-lapse shots that will amaze and impress your audience. If you happen to have a computer-based editing system, you have an additional advantage. But as we’ll see in this article, it doesn’t really require much in the way of technical gadgetry to pull off time-lapse shots for a wide variety of video applications.

The Basics of Time Lapse

Boiled down to its essence, time-lapse videography is the art of making an event take less time to occur on screen than it did in real life. (If Stephen Hawking were writing this article, he might find this a good point to elaborate a bit about the modern physicist’s view of the nature of time in general. But alas, we’ll leave that topic for another publication and focus on how it all relates to a video enthusiast’s mechanical universe). In the days before video, cinematographers would accomplish the time-lapse effect by manually shooting a single frame of film at precise intervals, one frame per minute, or one frame per five minutes, for example. This type of time-lapse shooting is called in-camera time lapse, because the entire procedure is done within the camera, not in the editing bay.

In the video world, moving images are usually recorded as magnetic information on tape, and things are a little more complicated. The most complex, technology-intensive part of shooting time lapse on film is in the timing mechanism, which must shoot frames at very precise intervals. In video, however, recording a single frame at a time can be a difficult proposition. Few camcorders are capable of shooting single frames, and those that can perform this feat are prohibitively expensive. For this reason, most professional-quality time-lapse video is accomplished in the editing phase. This doesn’t mean time lapse can’t be done in the camera (see the In-camera Time Lapse sidebar).

Not all time-lapse video applications require a professional-looking, high-quality end product. Security time-lapse video, for example, is useful for cramming a day or more of surveillance onto a single T-120 tape, but it doesn’t achieve this without some sacrifice in the quality of the final product (see the Applications for Time Lapse sidebar).


Time-lapse video requires more careful preparation than most kinds of video production. In an ordinary video shoot, you can shoot a 10-second shot over and over until you get it right, whereas time-lapse video requires much more time to complete shorter segments of video. You’ll need to pay special attention to circumstances that surround a typical time-lapse shoot. Here are some things to consider before you begin: