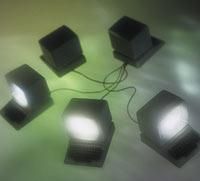 Until recently, the biggest payoff that most non-professional videographers could hope for was the pleasure of screening their videos in their living rooms before an admiring circle of family and friends. Now, however, and seemingly overnight, the Internet has metamorphosed from a utilitarian tool used by relatively few for e-mail and research to a viable entertainment medium. Suddenly, a powerful and inexpensive means of distribution for videographers is here.

There are scores of stories about amateurs who have put their video projects on the Web and become overnight sensations. Theyve garnered attention for themselves and a lucky few have even gone on to the big time, signing Hollywood deals and quitting their day jobs to work in their own field of dreams.

Although the most dramatic rags-to-riches stories involve amateurs, professionals are also cashing in on the Internet. Its given them a virtual gallery to display their best work sometimes a piece specifically designed to shine in this new medium. This exposure has helped some people suddenly shoot several rungs up on the professional ladder. Others have found its given them valuable entry into Hollywood power circles opening doors that had previously been closed to them. And some pros are finding ways to use the Internet as a new, if still modest, revenue stream.

Even videographers with no professional aspirations are responding to the lure of the Internet. While they once had to be content with the few people they could coerce into watching their videos, they can now show their work to millions around the globe. And most sites provide a mechanism for online feedback, giving the videographer valuable viewer response.

Initially the majority of shorts on the Web were shot on film and converted to video. But theres a growing number of works done completely on video from start to finish. For example, one of the breakout successes on the Web is a short called "405," a three-minute comedy about a jet landing on the 405 freeway in Los Angeles. Two friends, working nights and on weekends, collaborated to create this combination of live-action video and computer generated special effects.

According to the pair, they created the special effects on the kind of computer equipment that you can easily find at a consumer electronics store. The hit piece is featured on IFILM (www.ifilm.com), a popular site for shorts (as well as longer pieces) on the Web.

Another venue that features more and more video productions is AtomFilms (www.atomfilms.com). According to Anne Rosellini, the sites acquisitions manager, the number of videos appearing on the Web is increasing, especially those shot on digital video. Some Web sites that specialize in shorts, such as Eveo.com (www.eveo.com), specifically target videographers.

Similarly, while most of the attention had originally focused on story-based fictional pieces, documentaries and other non-fiction shorts are also burgeoning on the Web. This is good news. Since the Web caters to niche programming, videographers who produce less-commercially viable videos now have a venue and audience for their work. Eveo, for example, not only lists such standard genres as comedy and short fiction, but also travel, true life and sports pieces.

This trend toward including more non-fiction shorts can be seen on other sites as well.

"We are slowly experimenting with putting documentaries up on the site with quite stunning results audiences really like them," Rosellini said.

She explained that non-fiction pieces with the greatest appeal are those that focus on interesting people.

"Nothing beats an engaging character," she said. "Its tough to do a documentary thats very short but engaging shortness being important on the Web but Ive seen a number of delightful documentaries which act more as character sketches than anything else.

Give Them What They Want

Web sites that specialize in film and video shorts vary widely in how selective they are and how they compensate artists. Two of the most popular sites, IFILM and AtomFilms, for instance, have radically different content and compensation policies.

IFILM, with 2,500 works in its own library and links to an additional 7,500 more, is the largest site of its kind on the Net. The site operates in a democratic fashion and doesnt reject anything that is submitted, as long as its in the proper format (video or digital files) and doesnt violate three firm rules: no pornography, no movie trailers and no home movies. But what exactly constitutes a home movie?

According to Jon Fitzgerald, IFILMs VP of Programming, a home movie is "a dog running out to get the paper and dropping it on the couch or a video of your grandkids graduation."

For those who want to avoid the home-video label, Fitzgerald recommends that the piece should have a premise, a concept or a subject of some kind. He went on to suggest that a piece should explore a central theme or question.

IFILM shows works from every visual medium and genre. Fitzgerald said that animation, spoofs, comedies and experimental works are among the most popular pieces on the site, while some documentaries have worked quite well.

Unlike most other sites, IFILM has no limitation on length and even includes feature-length works. Although the longer pieces are slower to attract an audience, since they take longer to download, Fitzgerald says length isnt necessarily an impediment. He pointed out that one of the sites most popular offerings is a spoof of the movie Matrix, called Computer Boy, which weighed in at 49 minutes. Still, the vast majority of IFILMs most successful pieces are far shorter, many running under ten minutes.

Although IFILM doesnt pay for the work it shows, the deals it makes are non-exclusive, which means artists can shop their works to other sites as well. And what IFILM doesnt offer in terms of money, it can give in promotional value. Since it is so popular, it can be a valuable way to get your work seen by those who will pay for your talents.

Meanwhile, just a mouse-click away, AtomFilms operates on an entirely different philosophy. Instead of opening its doors to all comers, AtomFilms is highly selective about the works it chooses. It aims to build a collection of top quality, original pieces. With a smaller library than IFILM, consisting of about 1,300 shorts, AtomFilms works tirelessly to set up distribution deals for the shorts it has licensed.

Its distribution outlets include other Web sites, TV stations, airlines, movie theaters and even hand-held and wireless devices. Unlike IFILM, AtomFilms requires artists to sign an exclusive rights agreement, but in return it offers producers a financial incentive: a modest advance and a percent of the gross of every sale it makes, plus a percentage of the advertising revenue that the site generates.

AtomFilms is open to shorts in all genres and is always on the lookout for work that is unique and cutting-edge. However, according to Rosellini, the shorts it accepts must have broad appeal to succeed in the commercial market in order to attract its syndication partners. Rosellini stressed that another important consideration is length. The site accepts work up to 40 minutes in running time but prefers pieces that are considerably shorter. And for the Internet, Rosellini said that short is rarely short enough.

Rosellini went on to admit that most of the work AtomFilms accepts is harvested from the film festival circuit, not from unsolicited submissions to the site. Nonetheless, she said that some of their hottest Web hits have been culled from general submissions.

Clearly, the Web has opened a brand new door of opportunity for adventurous videographers, one with tantalizing possibilities. For videographers the Internet clearly isnt just for e-mail anymore.