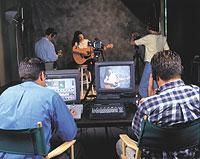 Most of the time when you think of video production, you think of shooting with one camera, film style, and taking your raw footage back to your editing suite for post-production editing. The very thought of trying to control multiple cameras can cause some people to break out in hives. However, it is not as hard or complicated as it sounds. It is also quite useful. By setting up multiple cameras to record events such as weddings, graduations, presentations, sporting events and such, the videographer can create a completed project right there on the spot, ready to duplicate or broadcast. No more post-production delays, since you are actually editing as you shoot.

Throughout this article, we’ll look at the technical requirements of a multi-camera shoot, as well as the aesthetic and production aspects that you need to take into account. We’ll also explore the roles of the various crew members and the communication between director, cast and crew.

More Than One Camera?

Every day we watch multi-camera productions without even thinking about it. The evening news, talk shows, sitcoms, sporting events and rock concerts are all shot with multiple cameras that are connected to a video mixer and mixed onto a single tape and sent to your television via cable or the airwaves. At a sporting event, like a Major League Baseball game, a director may have dozens of camera shots from which to choose. The production team considers every possible angle so they can capture every moment. With multiple cameras, there’s less of a chance to miss any action. You can also walk away after the production knowing that your production is in the can and a good product is ready for its audience.

Consider the possibilities: you can shoot a wedding video with three cameras, mix it on the spot with prerecorded graphics added at the appropriate times. Won’t your clients be thrilled by the possibility of receiving the recording of their blessed event that night? What a great wedding present! Or perhaps you specialize in other live event recordings. Whether it’s a sporting event, a graduation, a school play, a concert or a parade, with two or more cameras you can create a finished product that will amaze your viewers. These "live-to-tape" productions will add a sense of really being at the event and add to the strength of the memories they create.

So, do you need to rob a bank or hit the lottery to be able to afford a multi-camera setup? No. The list of equipment you need is extensive but not necessarily expensive. Here’s all you need: