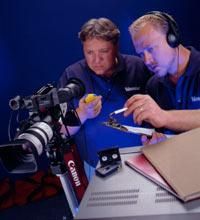 Making an instructional video without some type of plan will likely lead you in a direction other than the one you intended. Think of the approach you use in making your video as a roadmap allowing you to reach your final destination: the finished videotape. Before you begin, though, you’ll want to consider the following questions.
How long should your video be? Before choosing your approach, decide how long you want your completed production to be. The instructional videotapes produced at Videomaker are generally 30 minutes in length and are broken down into six, four-minute segments separated by 10-second "bumpers" or lead-ins to the next segment. In addition, each tape begins with an animated opening, followed by a 30-second introduction, and ends with a 30-second wrap-up followed by the closing credits.
"We use three different approaches in each of our 30-minute videos," said Lander, the video editor. "It breaks up the video, and gives it a better feel," he said.

Know who you’re trying to reach and plan your approach before you develop your script to avoid producing a video that’s out-of-touch with your intended audience.
What type of equipment and budget do you have? You don’t have to have any fancy bells or whistles to produce a winning informative video, but taking stock of your equipment-and your budget-is essential when deciding on which approach to use. As you’ll see in this article, some approaches lend themselves to higher-end lighting equipment, or depend on hiring professional talent. Unless you have endless monetary resources, be realistic about what you can achieve with the equipment, money and personnel you already have.

No matter which approach you decide to use, the experts advise heeding these basic concepts during the production process.
"Think of keeping continuity throughout your production, and always keep the theme of your videotape in mind," Lander advises.
One way to keep continuity throughout your video, Lander said, is to use the same color background in each segment. Lander said the Videomaker crew often uses this technique, but adds variety to each segment through the use of different camera angles or lighting techniques.
Another important consideration, no matter which approach you decide to use, is the way you frame your shot. "When you frame a shot, always think of the rule of thirds," said videographer Perry Jenkins.
The rule of thirds uses the notion that a scene is most appealing to the eye if its main elements appear at certain points on the screen. To use it, divide the screen into thirds vertically and horizontally similar to a tic-tac-toe game, and place the important elements along the imaginary lines and wherever they intersect.
Now that we’ve covered some of the basics, let’s look at some real approaches you can use today, straight from the Videomaker pros.

The Expert Interview approach is one often used by the pros at Videomaker. The approach involves using an expert on a particular subject to relay information to your audience (for example, you might recruit a local historian who can accurately describe your town’s history for the documentary you’re producing).
This approach, according to Lander and Jenkins, lends credibility to your topic and can be modified to suit just about any shooting situation. The expert can appear as the lone narrator of your videotape, or can appear on-screen with talent, who poses questions for the expert to answer.
Another variation of the "Expert Interview" is using two experts on location. Say you are shooting a videotape showing how to build your own greenhouse. By choosing two experts – a gardener and a handyperson – you can creatively show your audience how to take the project from start to finish using a hands-on approach. You might have your gardening expert serve as the narrator, while your handyperson expert leads your audience through the building process step-by-step. Camera close-ups of the repair person’s "work in progress" can serve to illustrate the main points.

Person on the Street

This approach, in which a person-on-the-street poses a question, which the narrator or expert answers, is ideal if you’re short on time. "It’s quick to shoot, and fast to edit," Lander said. This approach is also a good choice for a beginner who might not have the budget to hire acting talent, because you can ask a friend or two to be your talent at no charge.
Both Lander and Jenkins agreed that the Person on the Street approach adds realism to a video, and is a great approach to use in connecting with an audience.
"It really lets you get to the viewer on a personal level," Lander said.
Lander said when using this approach, however, it is important to make sure that your person on the street is someone the intended audience can relate to. If, for example, you are shooting a training video for a corporation, you’d likely want your talent to be dressed in business attire.
"Appealing to the audience is essential," Lander said.

Another favorite of the Videomaker team is the News Magazine approach. In this approach, the narrator of the video takes on the role of reporter, and leads the audience from scene to scene. This approach is similar to segments on the hour-long news programs you see on television, like Dateline NBC or 60 Minutes.
Say you want to document your hometown’s fascinating history. Using this approach, you might start at your local museum, and lead your audience through a video tour of the facility, followed by an on-location report in your town’s old downtown district. The approach puts you (or your talent) in the role of roving reporter, while giving the audience an up-close-and-personal view of your topic.

Narrators guide your viewers through your video, but don’t necessarily have to be experts on your subject. The narrator approach is ideal for getting across a lot of information in a short amount of time.
There are two basic variations on the Narrator approach; in one approach, the narrator is off-screen and is heard via a voice-over with B-roll footage (the Videomaker pros call this the "Invisible Narrator Approach"). A second variation puts the narrator on-screen, reading from a script (also known as the "Visible Scripted Narrator Approach"). It is important to note that all of the narrator approaches, whether they are visible or invisible, are fully-scripted and read, not improvised.

Now that you’ve chosen the approach(es) you’ll be using, it’s time to determine which production elements to include. This is where it gets really fun. By choosing the right elements, you can turn a so-so production into something extraordinary. Let’s look at some of the elements used by the production crew at Videomaker.