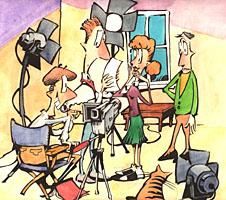 Each person you shoot brings along his or her own "bag" of personality traits. Shy Sally will suddenly forget her name. Difficult Dan will not listen to any of the directions you give him but will say whatever comes into his mind, regardless of your prompting. Nervous Nellie, usually still as a rock, will begin to zigzag in and out of the frame. Regardless of how they might behave in everyday life, people you use for on-screen subjects (called "talent" in the professional arena) will often undergo personality changes when you videotape them. Why? Primarily because you have addressed their attention to the lens of your camera. This is the time for you to coach your subjects into their best on-camera performances.

Alfred Hitchcock once said, "Actors are cattle." As much as I respect Alfred Hitchcock, I’ve never treated people I videotape like beasts of burden. When I teach directors about directing, I use the metaphor of the director as a coach. You must encourage your subjects to perform in an environment of trust so that they look natural and comfortable on camera. In this article, I’ll explain the techniques that will help you elicit the best performances from your video subjects, whether you’re shooting a company sales video or your own family reunion.

Coaching someone to speak directly to a camera and still seem personable, intelligent and warm is a very difficult task.

People who speak routinely in front of large groups suddenly become like a deer in the headlights when faced with a camcorder.

One of the easiest coaching methods is to have your subject talk to another person off-camera, instead of directly into the lens. Nervous Nellie will find it much easier to speak to a real, live human being than to a cold camera lens. Mark a place for the off-camera person to stand while listening to her, then pick the angle from which you wish to shoot. Have Nellie look at only one eye of the person she’s addressing. In actual conversation, it is completely normal to switch our gaze from one eye to the other, but when this is recorded on tape, Nellie will look shifty-eyed as she switches her focus.


When Nellie develops physical tics you have never seen before, you have a variety of options: first, remind Nellie that it is only videotape and we can shoot until we feel solid about the interpretation of the material. Second, remind her that this is not live television and no one will see the bloopers. (Don’t mention your annual Christmas video that features the whole year’s out-takes!) Third, if you are working from a script or an outline, and you are still unable to get results that work, have Nellie talk a little about the material in her own words. Allow her time to think about what she is trying to communicate not just the words on the outline. Then have her recite her lines back into your eyes. Move yourself next to the camera and direct her focus to the camera lens and with your most supportive tone, signal her to begin. Finally, if it helps, put a little piece of black tape over the red tally light so she won’t know when you’re recording.

Be a Good Listener

In order to get Difficult Dan or Shy Sally to perform the way you want you must make use of their abilities to listen and speak. This also means that you must maximize your own ability to communicate with them.


The least expensive component of videography is the videotape itself. This means you can allow your subjects to try the material several different ways while you coach them into the take you want.


Listening to what your subjects are saying, or not saying, may well be the key to your ability to provide the coaching that will give you the end product you want.
If Shy Sally can’t speak a complete sentence once she sees the red light on the front of the camera, it’s your job to bring her back to her topic and not let her obsess over the fact that she is being recorded on videotape.


Sometimes stepping directly in front of the camera and engaging Sally in a conversation, getting her attention off the camera and back to you, will improve her ability to speak to the camera. You can then move to a position beside the camera and hopefully she will not freeze up again. Don’t give her a countdown or use any other formal shooting direction that might intimidate her; just quietly roll tape and after she starts talking to you and then get out of the way. This style is not as effective as a direct-to-camera presentation, but if Sally will finally relax by not staring into the lens, it is worth the compromise.


If you want Difficult Dan to follow a script or outline, be sure to have some helpful hints prepared about what he can speak about. This same technique works as well for unscripted shoots. For example, if you’re shooting a family reunion, prepare some questions to ask, maybe about a specific event that touched most of the family members.

Be Part of the Solution
The more you shoot people who are required to speak and communicate something onto video, the larger your own personal bag of tricks will become.

Here’s a good general rule to live by: when a situation becomes difficult, don’t become part of the problem. When uncooperative Uncle Ira is answering every question you ask with "yep" or "nope," don’t allow your frustration to add to the intensity of the moment. Discover what Ira wants to talk about. Maybe you’re asking him the wrong questions. Re-think them and ask them in a more general form; look for something that excites him. Don’t ask questions that can be answered with a simple "yes" or "no." Even if your original goal was to get Uncle Ira to talk about the set he built for the school play and all he wants to talk about is his daughter’s first stage role, it’s better that you get some animated footage of Ira extolling his daughter’s talents than "yepping" on your chosen topic.

The results you as a coach/director can prompt from your video subjects will increase as they come to trust and respect you. Upon your first meeting, a subject may only know you by reputation; as he works with you and sees the result of your efforts, he will desire your input and respond immediately. The mutual respect that grows between a video subject and "coach" is beneficial to both parties. Treat your video subjects with respect and caring and they will give you their best efforts.


In spite of my respect for Alfred Hitchcock, I still firmly believe that the only methods that truly take people out of their safety-zones and get them to take risks on-camera are based on trust and respect.

Randal K. West is an award-winning television and theater director and is about to direct his first feature film.

Testimonials–first-person accounts of products, events or people–are a great way to make any video more interesting.


When shooting testimonials, have specific questions to ask. Don’t just say, "Tell me about the Spring Recital." Instead of having your subjects talk in general about the topic, ask them how it affects their lives. As the ad folks say, "Sell the sizzle, not the steak."


Explain to your subjects how the testimonial information is to be used. If they understand the format of the finished product and its purpose, they’ll be more apt to give you performances that will enhance your video.


Light the scene with just enough intensity to provide warm definition. If possible, don’t blast a key light at the speaker from the front. Bounce the key light off a white card and you won’t flatten your shot or create a hot spot.


Prepare a simple shooting release for everyone you videotape. Even if you’re not going to benefit financially from the sale of your video, it is still in your best interest to have a shooting release for the subjects to sign. This can contain no more than the name of your project and that the subject agrees to participate without financial compensation and that you can use the video for any broadcast or non-broadcast purpose. If you don’t have a release form, ask the subject on tape if you can shoot his or her image and use it in your video.