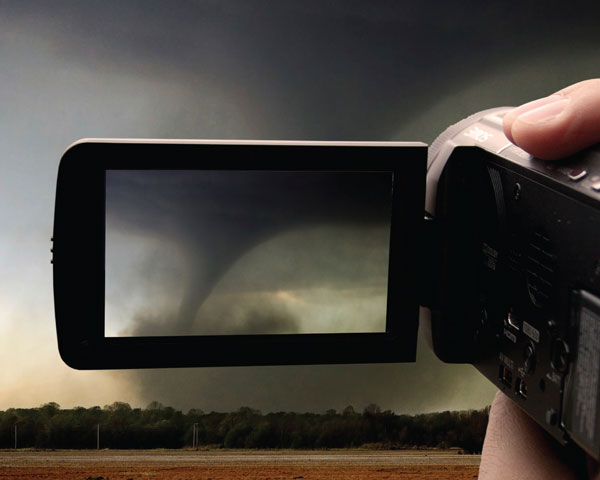 Your local newsman implores you to do it; the morning anchor asks you to share your special moments with her on Facebook; the weatherman isn’t just calling for severe weather, he wants to see your best tornado footage. The local media has become increasingly reliant upon its viewing audience to help tell the stories of the day. The only question is: will you be ready to roll when news breaks?

The news cycle has evolved into an around-the-clock intake process for media outlets. With the prevalence of affordable camcorders, smartphones equipped with HD video capabilities and mobile access from coast to coast and across the globe, regular citizens can share their stories – in real-time – with a content-hungry online audience.

But just because nearly everyone has access to video technology, does that mean they should be considered potential citizen journalists? What exactly is citizen journalism? What are ways the average Joe can shoot like a pro? And what exactly is considered “film at 11” material? Videomaker talked with some seasoned shooters to find out how anyone can improve their chances of getting their footage seen by the masses.

The Glory Days of Storytellers

Storytellers come in all shapes, sizes and ages. From grandpa retelling the battles of his times served overseas, to the toddler telling the tale of adventures at preschool, how we craft and deliver a message is limited only by our own imaginations. Citizen journalism could be interpreted the same way.

For decades, a credentialed TV film crew was held in very high esteem. Their skill set was unique, requiring the finest education and experience. While anchors and reporters were the faces of newscasts from sea to shining sea, there was an elite force of behind-the-scenes laborers who made the talent look their best. Television production professionals rarely got the credit they were due, but true skill shone through every night with featured stories, scheduled events and during the most important times of the year for broadcast outlets – sweeps. It was the amazing visuals, captured by the best of the best photojournalists, punctuated with the emotional elements edited with just the right copy writing that usually elevated media outlets to the top of the ratings food chain, feasting on the viewers insatiable desire for good stories.

But the glory days of broadcast news have been forced to give way to less glitz, slashed staffs and an approach where quality has conceded to quickness and quantity, where story count is more important than story content.

The Times, They Are a-Changin’

Twenty years ago, Kevin Kjergaard was a wide-eyed novice news photographer. He started working at KELO-TV in Sioux Falls, S.D. , as a way to get his hands on the latest video equipment. He covered all sorts of stories, and met people from all walks of life. When news broke in South Dakota, there was a lot of real estate that needed covering. From his perspective, covering everything with one camera was great – but there was always the need for more.

“I remember when major events would happen and we’d think how cool it would be to have had a camera there,” said Kjergaard, now Chief Photographer at the CBS affiliate. “Now, we do. Technology has made gathering news and images so quick.”

Keith Yaskin, owner of The Flip Side, a media and video production company, once roamed the deserts of Phoenix covering news as a reporter and videographer. With more than 17 years of professional experience under his belt, he has seen just about every kind of story you can imagine. With the changing landscape of broadcast news, he’s seen a shift in attitudes in the way news stories are covered.

“It seems like much of broadcast TV is just tossing darts and seeing what stuck,” Yaskin noted. “With the audience craving social media content, viewers would rather watch their favorites shows on their DVRs than watch the 5p.m. news with stories that aren’t interesting.”

“Some of broadcast TV is adapting to viewers habits, finding their niche in this new landscape, while other station managers are like the guy about a century ago trying to sell a horse to someone who just bought a car.”

What is a Citizen Journalist

With the expansion of social media being an acceptable form of news gathering, media outlets have leaned more heavily on user-generated content to deliver not only timely updates from breaking news events, but to offer first-person perspectives of topical moments in our lives. Anyone armed with a camcorder – or cell phone for that matter – can deliver real-time content to anyone willing to watch.

CNN is a global news outlet that routinely incorporates footage submitted by viewers. Whether it’s cell phone footage, or pocket cam video, if it captures news happening and the chaos or reaction that follows, they want it. The global news network started it’s iReport program back in 2006 and has seen contributions grow substantially since launch.

Many major network news outlets have followed CNN’s suit. FOX News has its uReport, MSNBC encourages viewers to submit photos and videos via e-mail and social media, while ABC News has its i-CAUGHT franchise. Contributors typically grant the networks the authority to use their content, and the fine print eliminates the chance for monetary remuneration. For most, however, simply sharing their perspectives to historical moments is compelling enough reason to submit their footage.

News doesn’t dictate when or if it’s going to break. How it’s captured depends on who’s around to capture it. Armed with few of these simple suggestions, you can be prepared to stand in as “TV Crew On the Spot” and get your proverbial 15 minutes of fame, thanks to content that rocks. 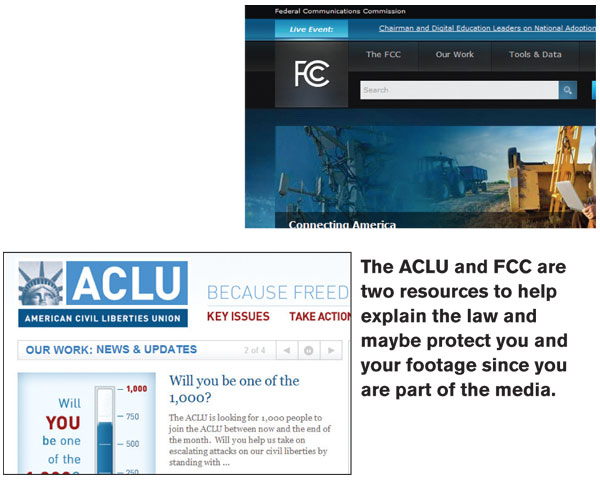 We live in a ‘looky loo’ society: when there’s a car crash, we slow down and take in the scene; if there’s a house on fire, we’ll stop and watch; if a storm is approaching, our instincts have become such that we stand and ingest instead of seeking shelter. Blame the media, blame an egocentric ‘Nothing bad will happen to me’ psychology of society, blame the president…whatever the ridiculous reason, a majority of the global population tends to absorb the realities of the moment, instead of turning away from them.

Either we’ve become so immune to tragedy and destruction that we’ve been rewired into thinking it’s okay to look, or we just have become so desensitized to it that we aren’t affected by it. Whatever the reason, there’s a good chance that at some point in your life, you will be witness to some form of breaking news. Be it a hit-and-run, or impromptu tight-rope act, you’ll need to be ready. With these tips, you will be. 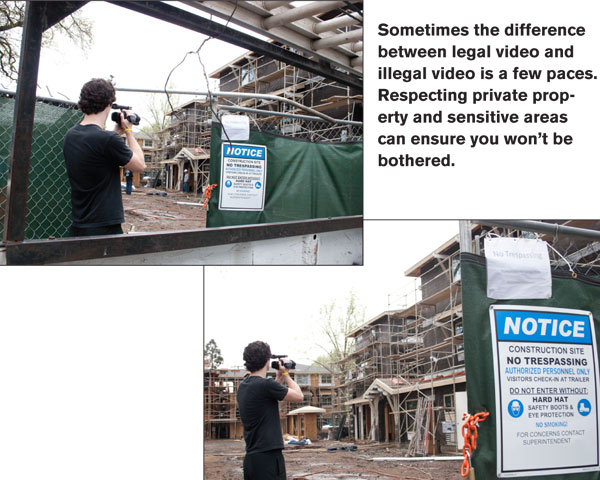 Videomaker‘s managing editor, Jennifer O’Rourke was a news shooter during the glory days of broadcast TV. Working at several California stations for two decades, she says she had an uncanny sixth sense about being at the right place at the right time when events unfolded – in fact, many of you may have seen some of her footage at one time or another.

“I covered many actions that no other news crew caught which elevated my footage right away to national and international broadcast,” she says. “The key is keeping your wits about you, staying emotionally focused on the tasks of good framing, proper coverage and illustrating the event correctly; and being very alert and aware of what is going on all around you, not just where your camera is focused.” O’Rourke adds that if consumer cameras captured those same events back then, the footage would have had to be extremely unique, because the camcorder quality was so poor. “But now, anyone with a small digital camcorder who captures clean, focused and stable footage can get their work seen on TV,” she says, “It’s a wonderful way of democratizing a once elitists-only world.” 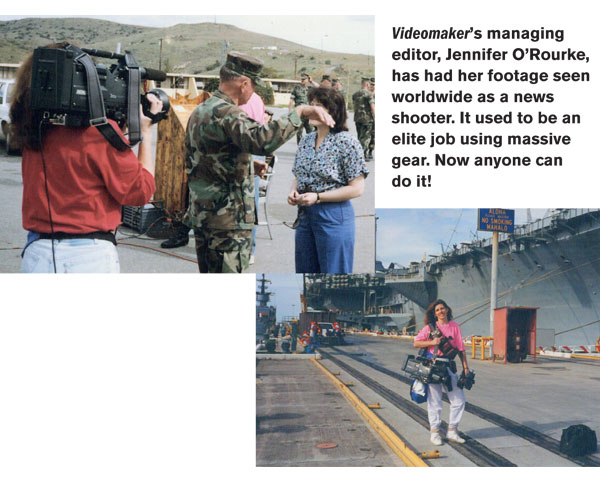 As a citizen journalist, it’s hard to travel with television production gear, let alone afford shooting with it. Your handheld camcorder or smartphone – whether it shoots SD, HD or 3D – will generally be accepted if it captures the moment. Producers and editors will want visuals that are compelling, captivating and emotive. Don’t worry about not having the best equipment, just focus on how to use a camcorder in a way that will help paint a picture of what you’ve just witnessed.

Additionally, there are some rules and regulations that could impact how to shoot videos. According to both the Federal Communications Commission (FCC) and the American Civil Liberties Union (ACLU), which outlines citizen journalist rights, videographers are legally allowed to shoot photos and videos at crime and accident scenes, as long as it doesn’t interfere with the work of law enforcement officials.

FCC rules state that citizen journalists and TV film crew alike cannot break any other laws while shooting video – if you are standing on private property, and the landowner asks you to leave, you need to leave. You can (and just might) be arrested for trespassing. Business owners may also interact with you in this territory since their image is like that of a public figure, and they won’t want to be misconstrued. However, at no time can law enforcement officials take your camera, unless they have a warrant, or you’ve broken – or are in the act of breaking – a law.

Additionally, the ACLU points out that producers will want to check their state wiretapping laws if they plan to use the audio portion of their video. These laws vary from state to state, so educate yourself before pressing record. It is not an easy read by any means, but it does refer to eavesdropping and may come into play for your footage. The table in this link www.videomaker.com/r/605 shows whether photos or video is included for your state.

“Know when to back down, regardless of your legal rights,” added Elliot. “Your video won’t do you any good if the camera is in the impound and you’re in the lockup. Don’t get yourself arrested if you can avoid it.”

Film at 11, Notoriety for You

What makes good “made for TV” video? There’s an industry saying: “If it bleeds, it leads.” However, as Kjergaard noted from his two decades of telling stories across South Dakota, it’s not always the flashing lights that capture the viewers’ attention.

“Good content is the unexpected. What happens right before, what happens immediately after, how people respond, expressions, body language,” Kjergaard said. “I think that tragedy is always the best content. Good things happen everyday that people just take for granted. Challenge yourself to share those moments as well.”

And while chasing ambulances may get your story on the news, sometimes it’s the reaction to the story that generates the most interest.

“Build a relationship” with local television production staff, Yaskin added. “Communicate with them about life’s everyday things. Don’t be a salesperson (with your video). Be a person. Prove that you understand the difference between what’s newsworthy and what’s nonsense.”