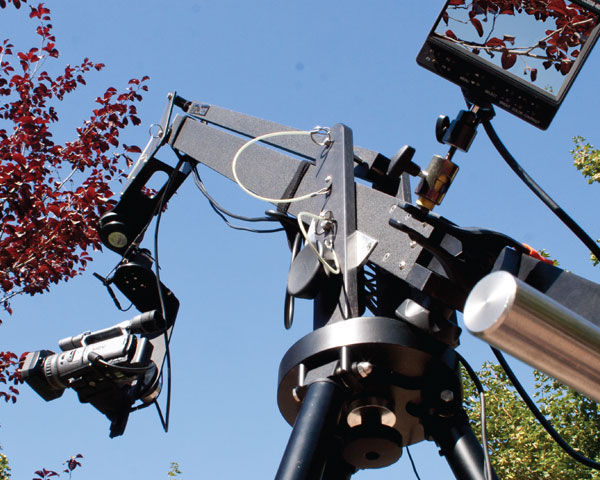 When watching Hollywood films, you’ll find the zoom used sparingly. Here’s the reason: there’s a good chance your audience will notice the zoom. Usually you don’t want viewers to take note of your technical choices – you want them to pay attention to the production’s message. So, if the zoom is rare, what’s the alternative method to create smooth camera movement? Read on.

Let’s look at the various types of camera supports that can move your work from ho-hum to stellar. We’ll go beyond the simple pan and tilt and describe seven different camera supports: dollies, sliders, jibs, cranes, stabilizers, helmet mounts and car mounts.

We’ll start with some camera movement terminology that lays the foundation for the basics of filmmaking. Pivoting horizontal (left to right, or right to left) camera movement is a pan. Pivoting vertical movement (up and down) is a tilt. Zoom lenses use optical magic to create the zoom effect – a magnifying process that appears to make distant objects closer.

Some videographers think of the zoom as a “poor man’s dolly.” There are similarities, but the dolly offers a much more powerful cinematic expression because it translates to natural human perception. The dolly allows the camera a fluid way to get closer to the subject.

In its most basic form, a dolly consists of a wheel attached to the bottom of each tripod leg. This works great in a studio where floors are flawlessly smooth; but in the world outside a studio, one cannot expect a glass-like surface. Sidewalks have cracks, houses have bumpy transitions from carpet to hardwood and it’s impossible to smoothly roll a dolly on grass.

Take the dolly and place it on a specially designed track – think roller coaster – and you have a great method for shooting three doctors as they walk a hospital corridor. This kind of setup can get pricey, but the resulting silky-smooth camera movement is worth the expense. The portable track will work on most relatively flat surfaces.

Want to really mess with your audience members’ minds? Try zooming forward while simultaneously moving the camera backward on a dolly. This will create an otherworldly effect made famous by Alfred Hitchcock in the church tower scene in Vertigo.

Are you strapped with a tight production budget? Try using an office chair as a dolly – the mechanism that adjusts the height of the chair might even provide a smooth ride down for you and your camera. Other household items with wheels, like carts, skateboards and children’s wagons, can function as a low-cost dolly.

The slider is a simple camera support that’s somewhat limited in use, but perfect for those with small budgets. This rig attaches to the head of a sturdy tripod – sometime between two tripods – and allows a camera to slide along a track. Most sliders work best with lighter cameras.

Camera travel is limited to a few feet, but the result can be spectacular. Sliders offer a limited version of what the more advanced, and costly, dolly, jib or crane can accomplish.

In its most simple form, a jib is an arm (or boom) of various lengths attached to a sturdy tripod. The camera attaches to the long end of the arm; the short end holds a counter-balancing weight. The tripod works as the fulcrum point resulting in a teeter totter-like device that provides very smooth and varied camera movement.

Most jibs are long enough to make the normal hands-on operation of the camera impossible – the camera is simply beyond reach since it’s operated at the opposite end of the jib’s arm. Professional jibs offer a remote method to start and stop the camera, focus and zoom.

Unfortunately, such sophisticated remote control equipment is beyond the budget of many videographers. Fortunately, some consumer cameras feature wireless remote controls that offer a way to start and stop recording.

A crane builds on the jib concept by adding hydraulics to smoothly move a long boom arm. This type of camera movement comes at substantial financial cost. Similar to a “cherry picker” used to maintain power lines, the camera operator sits at the end of the crane with the camera. A second operator controls the crane’s movements. A crane might be attached to a special truck dispatched to the location of a field production. In the stunning opening of Touch of Evil, Orson Welles directed a crane to capture more than three minutes of precision choreographed action.

Want stable and fluid shots but find yourself in situations where it’s impractical to set up a track for a dolly? The answer: a camera stabilization system. The pros often use a Steadicam brand camera stabilizer. This device, strapped to the operator’s torso, uses a heavy counter-balancing system to work its stabilizing wonder. To use a body-mounted stabilizer well, the operator must be strong and agile.

The stabilizer allows the operator to move over uneven ground, or up stairs, while maintaining smooth camera movement. While body-mounted stabilizers can be expensive, there are alternatives costing a lot less, which are perfect for today’s lighter cameras.

Many consumer cameras have built-in image stabilization systems that help smooth minor camera jostling. Some do their stabilization optically, some digitally. Be wary of the digital variety because you may pay the high price of a lower resolution image.

A helmet cam offers a compelling “through the eyes of” point of view (POV). In this situation, the human head becomes the camera head. This camera support might be appropriate for documentaries or extreme videos but overuse of this often jittery video might make your audience dizzy. You won’t have much control over the operation of a helmet cam – zoom, focus and other settings won’t be easy to change. Fortunately, modern low-cost POV cams, like the GoPro HD HERO2, feature extremely wide angle lenses and a fixed zoom length, so the amount of control required is minimal.

Special camera support systems designed to attach a camera to a vehicle use suction cups, and sometimes straps, to secure the camera to the car’s hood, fender, door or even inside the car. The perspective from a car cam can be very gripping. To control the camera, you’ll need a remote control and monitoring system similar to the jib setup.

You now have new techniques to add to your toolbox of creative types of camera movements. Use them sparingly and with purpose. Now you can take that camera off your shoulder – or out of your palm – and dazzle your audience with professional-looking camera movement.