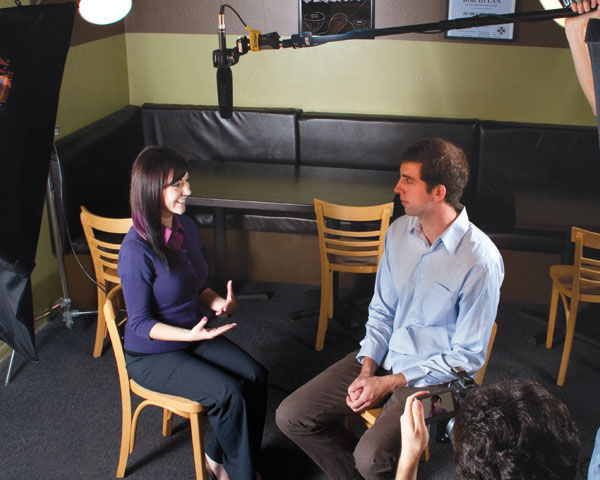 You want to create an interview that will have the look and feel of a professional studio production with multiple cameras and graphics. But you only have one camera. It can be done. Remember in creating video, the viewers’ perception is more important than the reality. And we create our own reality for the camera. It doesn’t matter if it’s an interview that will air on television or just your grandparents telling stories to document your family history. Both are important and need to have visual appeal as well as interesting dialogue to hold the viewers’ interest.

We are accustomed to the cuts from interviewee to interviewer as they speak and cutaways that help tell the story. Our society has become very visually literate. We have been programmed by commercial television and will quickly become bored by a static one-camera interview. By static, I mean that the camera is mounted on a tripod, focused and framed before the event starts and the camera angle is never changed during the interview. 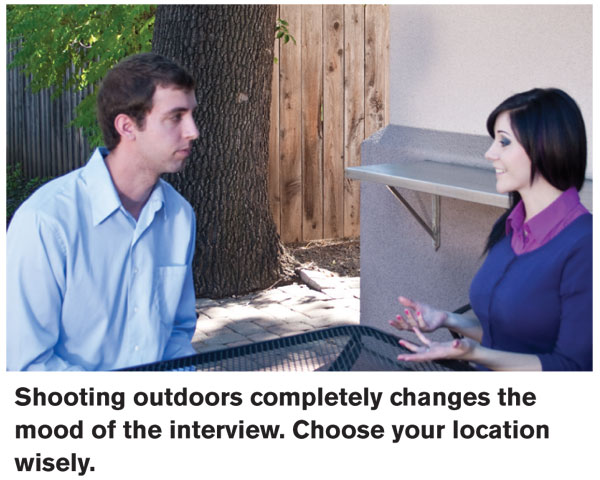 So how can these effects be accomplished with only one camera? It can be done, but it does require some preplanning, a pre-interview interview and editing after the footage is shot. Therefore you need some type of video editor. It can be a computer program (i.e. iMovie, Pinnacle, Premiere, Final Cut, or any of the other fine editing programs), or a stand-alone editor, such as one of the Casablanca or Avio series; but you will need an editing device or at least access to one.

To create a one-camera interview, you will also need the following:
1. Camera
2. Tripod or other stabilizer
3. Two chairs
4. An Interviewee
5. An interviewer
6. At least one mic

For your location, look for an area that is relatively quiet with as little ambient noises that could interfere with your sound, like traffic or kids playing outside, (unless these would add to the story you are telling but make sure that the noises do not over-ride your talent). Lights, lighting reflectors, gobos, and a good microphone are all nice to have and they will improve the quality of the final video. But they are not an absolute necessity.

Let’s get started setting up an interview. The first thing is to select a person to interview and set up the pre-interview with them. This can be done in person or over the phone. If you do not know the person that you will be interviewing it is best to do the pre-interview in person. During the pre-interview you can establish a time and location to do the video interview. You should select an area for the interview that is well lit. That means an area with even lighting that has no bright areas including light sources that may be caught in the camera’s angle-of-view. If the room has windows that overwhelm the interior lighting, they must be covered in some way.

Make sure that no deep shadows are evident in the viewing area as well. Remember, even with all of the improvements that have become available with digital video equipment, the camera still does not differentiate as well as the human eye. And speaking of eyes and lighting, be aware that overhead lights may create raccoon eyes on your subjects. Make sure you have some type of fill lighting to differentiate the topography of the face. This can be with lights or reflected light. You can reflect the light using commercial reflectors, gobos or even a white sheet of copy or typing paper. The size of the reflector will be determined by the proximity of the lights and area that the light is to be reflected into.

The mood you want to create will also affect the choice of location and lighting. To create a formal feeling to the video then that of an office, for example, the living room or dining room would be good locations. But the living room and dining room can also be readily made to look like an office or studio. For a homey effect, the kitchen table or front porch might be better. Avoid porch swings and rockers, as they will be put in motion as the talent gets into their story. This movement could cause problems for the camera’s focus and depth-of-field and is also a distraction to the viewer. If you want to do a cut-away shot of the rocker or swing in motion (a long or establishing shot), you can cut this into the interview during editing to make it look as if the interviewee is in the swing or rocker. Just remember to make sure that the background is the same for the rest of the interview. 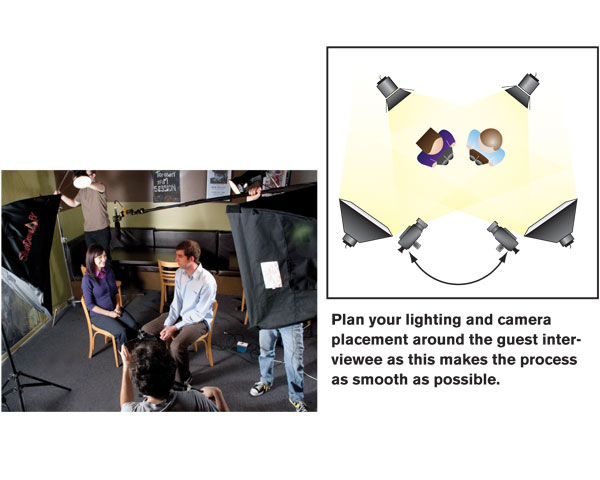 All video projects should be divided into three phases: Pre-production (planning), Production (Shooting) and Post-production (editing and distribution). Good preplanning can save you money, labor and time during the production and post-production phases. It will also make you look more professional to your client/interviewee.

Pre-production should consist of at least the following:

The day before the interview, assemble and check out your equipment to make sure you have everything you need and it is operational. (An equipment list makes this easier). On your equipment list you should include all of your video equipment plus things like a voice recorder, pens or pencils, reflectors, video tape, gaffers tape, etc.

Arrive at the shooting location with all of your equipment a few minutes early. This gives you the chance to re-appraise the location, just in case something has changed that you will need to compensate for. It also gives you time to set-up your equipment and stage.

Cutaways Before the Shoot 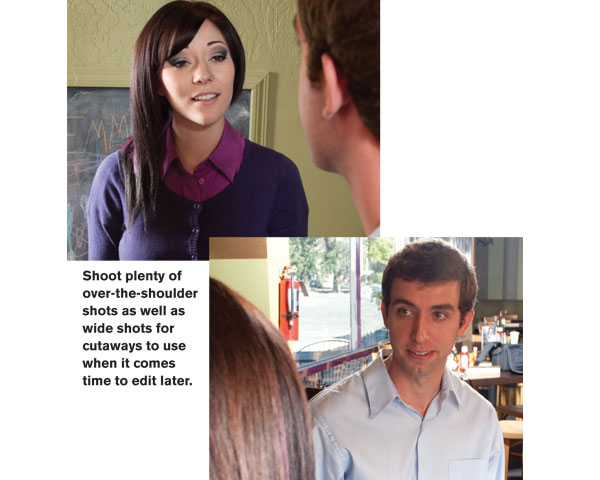 Before you start the interview questioning, shoot a few seconds of a shot of your guest over the interviewers’ shoulder (this is known as an OTS – an over the shoulder shot). Shoot another OTS over the guest’s shoulder at the interviewer. Shoot each shot a couple times, so you have choices in editing: a wider shot that includes a portion of the backside of the subject, an extreme close up, and a regular bust shot. You can insert this clip as a cutaway in your post-production editing software. Set your audio up and check it, whether it is on the camera or dedicated microphones, white balance your camera if it has that capability, and you’re ready to go.

After your guest has answered all the questions satisfactorily, reposition your lights and camera so that he/she is facing your interviewer. Now have the interviewer face the camera and ask each question again in the exact same order calling between each question. 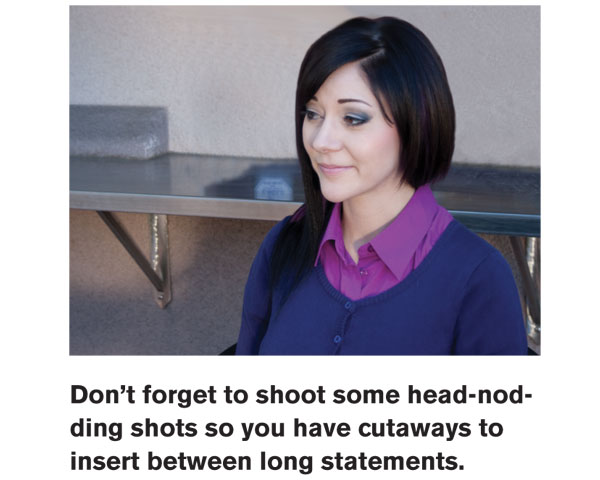 After all the questions have been asked again, take a few more cutaway shots of the interviewer, nodding his/her head as if he/she is agreeing with something the guest said. This is another cutaway shot that you can insert in post editing. Now you can get a few more 2-shot cutaways of different angles of both them, for “safety” shots for later. The best cutaways are those when one person isn’t talking as you’ll need a shot of the person looking on without their lips moving, or it gives away the illusion that you aren’t really using two cameras. So make sure you explain to the talent after the interview that you’re just getting some cover shots. Your interviewer most likely will understand this, so you simply roll while they are talking, making sure to get some ISO shots of each of them not talking while the other is talking. (ISOs = news gathering speak for isolated or solo shots without someone else in the shot.) This is crucial, however you don’t want to tell both of them to just be quiet, because that will create an unpleasant silence that is awkward and shows on tape. Now, thank your talent, pack up your equipment and let’s head to the editor.

Load your footage into your editor and lay down your guest footage as the primary track. Take the footage you have of your interviewer asking the questions and the cutaways and break them down into individual clips. Take the clips of the questions and the cutaways and insert them into or over the appropriate place in the primary track so that it looks as if the camera is cutting to the interviewer as they ask the question and then back to the guest as they answer it. When your final product is viewed, it will look as if you are cutting from one camera to another during the interview.

Now here’s where those ISO cutaway shots come in. Say your interviewer asked a question that required the subject to answer in 15-seconds, but she rattled around for 35-seconds before she go to the point. You simple edit out the part you don’t want, and butt the beginning and end of the comment together, and place a 3-second video-only shot over the subject’s face, making sure to not cut the audio to bridge the cut together. If done right, the shot will look as if your interviewer is nodding and intently listening to the interviewee, yet you’ve managed to trim 20-seconds of content. This is how they do it in the News.

If possible, keep a time log indicating at what point the interviewer starts to ask the question, and also at what point the guest begins and ends at their answer. Inform your interviewer that they are not locked in to the list of questions. If the guest says something of interest that you did not cover in your pre-interview, they can ask the additional questions to elicit more information about it. Make sure that you note this additional question on your time log and that your interviewer asks that question while you are taping them.

Percy Ledbetter has been working in the visual arts for more than 18 years. He recently retired from teaching multi-camera video production at a community college.