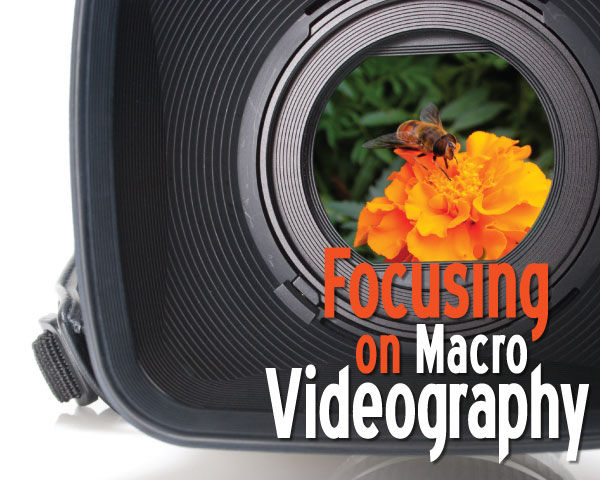 As video producers, we’re always on the lookout for new textures, new imagery, and startlingly fresh looks for our videos. It’s hard to keep up with the constantly changing visual world, but there is another world, a fascinating world once relegated to sci-fi films and laboratories: the micro world. We’re all used to seeing everyday objects at a certain size. Just imagine using your camera’s macro function to bring your viewers eye to eye (actually many, many eyes!) with a honey bee, or perhaps focusing on the precision handiwork in a woven pattern.

What is Macro Photography? 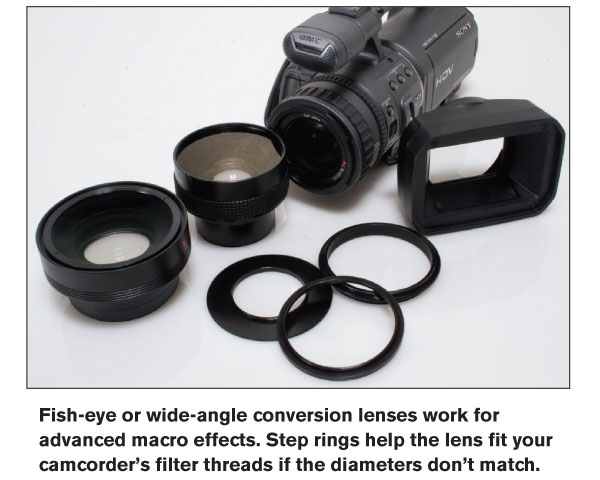 Macro photography starts with an ordinarily small object and magnifies it many times its original size. Sometimes taking on this magnified perspective can be purely practical. For example, you may be working on an industrial video and you want to show off the precision fit of two tiny components. Or perhaps you need to show the fine condition of a coin collection for insurance purposes.

Macro filming can be artful too. The audience can appreciate, for the first time, the delicate complexity of a flower petal or the detail on a hand-painted figure. Even printed words and maps take on new importance when we can see the very texture of the paper or the indentations of each letter produced by an ancient Underwood typewriter.

In all of these cases, macro photography brings your audience’s focus into places their eyes normally don’t go. We are all on the lookout for exciting new looks for our videos, and this is a case where you can put the graphics software back on the shelf and create something new using the gear you probably already have.

Does My Camera Zoom into Macro Mode?

Many of today’s advanced cameras have a macro mode at the extreme end of their zoom range. As the internals of the lens move further away from the image sensor, the camera will be able to focus on objects just a few inches from the lens (sometimes on the surface of the lens itself). That’s your macro mode, which may or may not be marked as such on your camera (many cameras use an icon of a tulip to indicate closeup photography mode). Even HD pocket cameras are catching up. Kodak’s Zi8 brings macro shots into focus at the flip of a switch.

Cameras that don’t have macro at the end of their zoom range simply lack the space to have the internal lenses move out far enough. For these cameras, you can find aftermarket add-on lens attachments that screw or clamp on to the front of the camera. These attachments are practical, in that you can share them among different cameras in your collection. Now, instead of using your zoom control, move the camera right up to the object you want to record. Camera placement is crucial, since the focus ring will be of little help here. Also crucial is a tripod, since the tiniest movements of a handheld shot will be magnified many times on the screen.

Now you’re ready to shoot some dynamic closeups. Here are some other tips that will aid in your adventures in the miniature worlds of macro videography.

Lighting: The amount and quality of light in your scene are important considerations, especially if you’re shooting in natural light. Your camera will be close enough to your subject to be the main culprit in blocking light. You’ll need to be clever with placement of lights and the camera. Also be careful of metallic or glassy objects as a source of glare. You’ll get great results with broad diffused lighting.

Shot movement: If at all possible, move the subject rather than the camera. At such a close range, even tiny camera vibrations during a pan will be greatly exaggerated. Put your subject on a lazy susan or even an old turntable for smooth tracking moves of your subjects past the camera.

Depth of Field: Don’t forget that more light means you can use a smaller aperture and therefore have more depth of field. Depth of field is the range of your image that will be in focus. Smaller aperture gives your camera the ability to focus on a larger area. Next time you’re watching an older adventure or sci-fi movie with model shots (especially a low-budget film), notice how toylike the models can look if the depth of field is too shallow. If your subject is moving, it may be a good idea to arrange the shot so that the subjects move laterally, within the plane of focus. However, there may be some happy visual accidents by letting the subject blur in and out as well.

Focus: When concentrating on something detailed and tiny, focus is of paramount importance. That means relying on an external monitor for critical focus, rather than your camcorder’s tiny viewfinder. The amount of light will have a direct impact on how much depth of field you have, but don’t be afraid to experiment with letting parts of your image blur out in some cases. This can accentuate the macro effect in a visually pleasing and artful way. Soft-focused regions are also great screen real estate to use behind titles or graphics later. 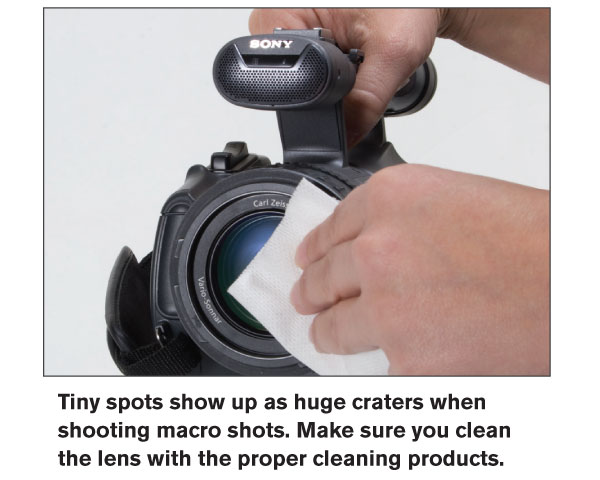 A clean lens: Since you’ll sometimes be focusing on objects very close to the surface of the lens, it’s critical to ensure that surface is clean. You should always have lens cleaning supplies with you on a shoot. (Read our Camcorder Care maintenance and cleaning tips here: www.videomaker.com/article/13798.) TIP: Shining a flashlight across the surface of the lens from the side can reveal dirt and smudges.

Remote control: Touching the camera to start and stop recording at best exposes your shot to camera shake and at worst can disturb any delicate alignments you’ve made. If you’re doing a nature shoot, you probably don’t want to frighten your subject away by running in to roll camera. Simply use your camera’s remote to start and stop. This is another good case for using an external monitor to ensure that the camera is recording, and you should also turn off your camera’s tally light (or tape over with electrical tape), so as not to distract your subject, or, even worse, reveal the reflection of a flashing red light in your video. 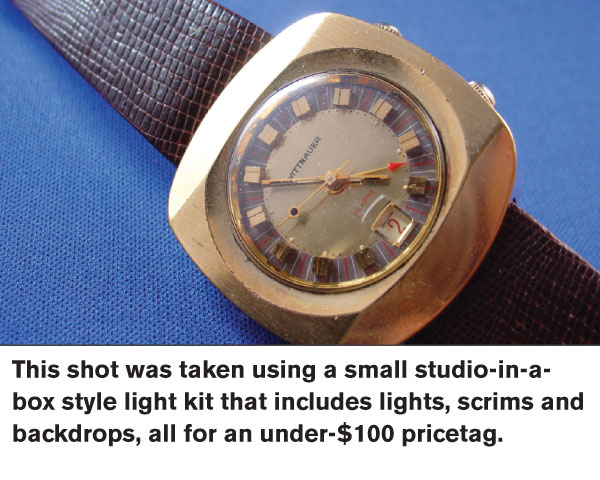 Micro-studios: There are pop-out photographer’s “cubes” made entirely of diffusion material that are great as miniature studio setups for videographers. You’ll find these in photography shops, often intended for people photographing small objects for online auctions or catalogs. If you are looking for product shots in the “white void,” these kits are ideal. Some even include different color backcloths and lights. I took the macro photo of the wristwatch below inside just such a mini studio kit that even included light sources for around fifty dollars.

Get Up Close and Personal! 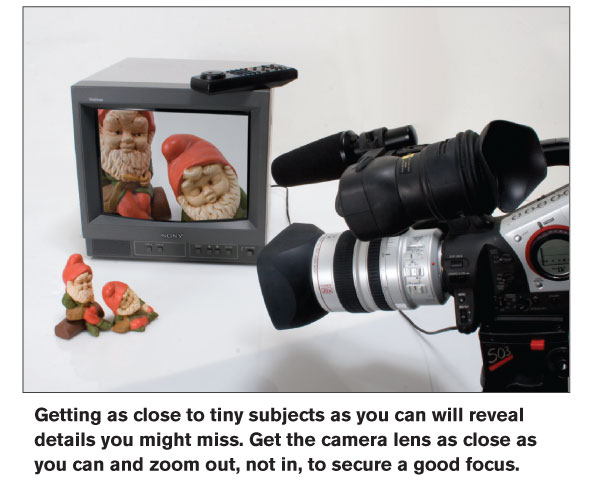 If you’re the kind of video producer who has never used the macro function on the lens, you can see that there are plenty of reasons to give it a try. There are purely practical reasons to get an extreme closeup shot, but there are even more artistic shots to capture that help you tell your story. 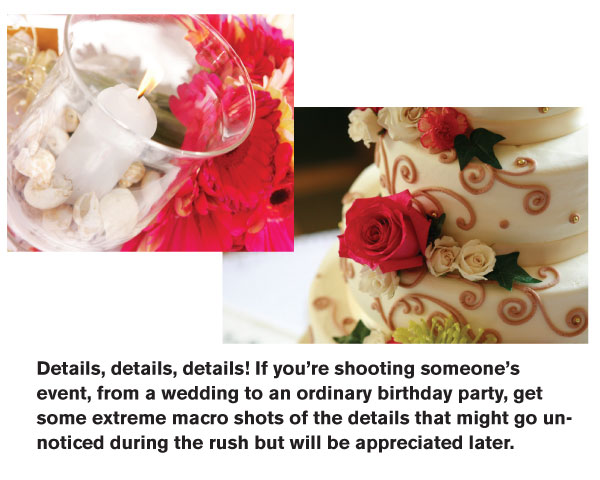 A great opportunity for macro shots is on a wedding shoot. Take some time at the reception to spot those visual moments that the happy couple will be even happier that you captured. Grab some macro shots of the decorations on the cake, detail shots of the invitations, closeups on photographs. Keep surrounding textures and backgrounds simple, and don’t be afraid to let macro’s natural blurring vignette your shot.

Don’t forget that people’s memories are often made up of these little details, and peppering these throughout an edit adds an extra dimension to the story you’re already telling. They’re also great editing lifesavers, ideal as title screens accompanied by a tasteful computer graphic. Though macro videography, you can make those little things come to life every time someone watches that video.

As a visual communicator, it’s important to keep your eyes open to both the great big world and the tiny one that’s unlocked by your macro lens. Extreme closeup shots can convey information and details that a speaking subject cannot, and they also add variety and texture to any project. Macro videography can be a key to a whole new visual world, often using tools that you’ve had all along.

Bohus Blahut owns and operates a film and video production company and is an independent video producer, filmmaker and educator.