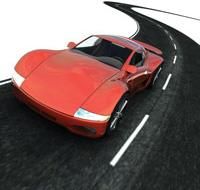 To view the tutorial video for Dynamic Chase Scenes and download project files to work along with the tutorial, click here.

Introducing an exciting new feature from Videomaker: Interactive tutorials! Every month these articles will link to an on-line training video and clips you can download to recreate the effect or technique. See the end of this story for the link.

If you make a car chase using only one camera angle, it will be the world’s most boring chase, no matter how fast the cars are going. The key to making chase scenes work is an abundance of coverage. The more cuts in the scene, the more effective it tends to be. Adding the right soundtrack to accompany the visuals finishes off a more effective action scene. Videomaker‘s first mag and online tutorial will cover the technique of making exciting chase scenes.

As a director with any movie, you want to keep your story’s perspective in mind. If your story focuses on Veronica, female spy aged 25, then your camera angle choices should reflect her point of view, or POV. If she is dominant, the lower camera angles looking upwards toward her will convey a sense that she is tall and in charge. The POV, is not always on the perspective of the main character, but you justify what’s known as the “God” point of views as how that character interacts with them.

In the 1980’s, action scenes used a lot of slow motion and were mostly on sticks. Ever since 1998’s Saving Private Ryan, the tendency for action scenes has been a more handheld “realistic” or documentary feel. This has spilled over to action TV shows like Firefly and 24, plus movies like the Bourne series. Handheld camera angles establish a reckless feeling, and tripod shots feel smooth. The current fad of handheld puts the audience into the story, with a “you are there” feel.

For chase scenes, you should use a variety of angles to convey a sense of fast movement. Getting as much coverage as possible gives the editor more control. The concept is that, in an action scene, things happen faster and people will think faster, so it is acceptable to cut faster and convey more information in less time.

The Setup: International jewel thief Vivian has just heisted diamonds and police are pursuing her as she races off in her red BMW.

For a car chase, you can get shots of all kinds of things to make it visually more interesting and convey a sense of speed, even if you drive mostly 25mph. Make a list of things to shoot that relate to speed and the story.

The shots (listed below) might comprise only 30 seconds of screen time or less, but they could take half a day or more to shoot. 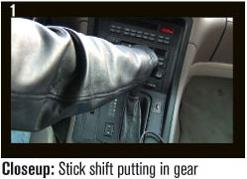 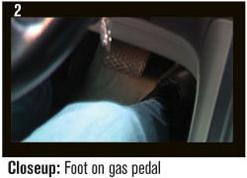 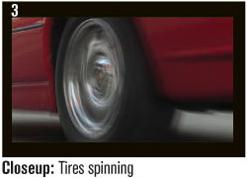 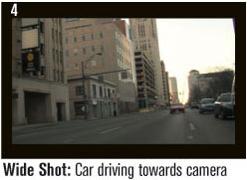 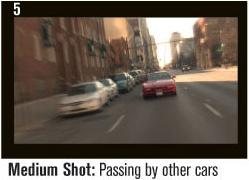 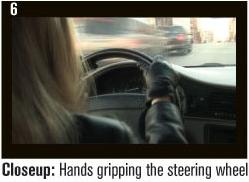 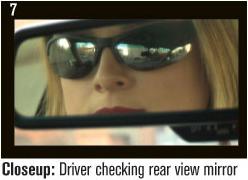 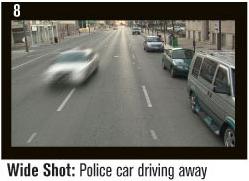 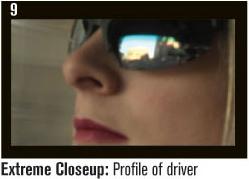 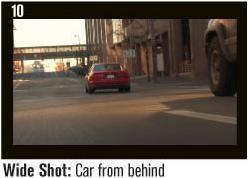 Caption: Here’s an action sequence broken down shot by shot. With the right pacing and the use of cutaways and closeups, you can make the action seem faster than it really is.

Other Shots to Consider:

You’re Out of Order

In action scenes, shooting in sequential order is simply not practical. Shoot all the exteriors in a row, then all the medium shots, and finally all the closeups and inserts.

For the wide shots of a car chase, using the zoomed-in shots will make the ground and everything around a car more blurred and appear to be moving faster. Because of that optical trick, you can be moving 25mph and it will look more like 50mph.

The best thing about the closeups is that you can shoot them while the car is going 15mph and cut them in with the faster-moving footage, and no one will ever know. In the closeup of a speedometer, for example, you can take the car out on a freeway (as long as it’s not the 405 in Los Angeles and you’re not driving!), get the car up to 70mph, take a shot of that, cut it into the inner-city footage and – in the audience’s mind at least – the car is moving at 70mph.

At its core, fast editing tends to make the viewers more tense, excited and at the edge of their seats. By contrast, if you want an audience to be more relaxed, longer cuts will ease them into the scene. More edits in less time works more effectively in action scenes. Because of the rate of cuts, the more traditional idea of showing a master or establishing shot first can go out the window, because the geography will be established a few seconds later. No one watching will be lost, as long as you get those wider, establishing shots that show viewers where the scene is.

To finish off a good chase scene, you need the accompanying sound. Sound is 50% of the experience, and that is especially true in action. Adding sound FX to match the picture is essential. The sounds of the tires squealing, the off-camera sound of a police siren, the car behind honking and many other sounds can heighten the tension and make the action seem more real. Ambient sounds of the city streets and the constant revving of the engine are all sounds that add a subconscious connection to the visuals. All that, and we haven’t even added the thrumming, fast-paced music yet.

Most people understand that music controls the mood and music of a scene, in the same way that the editing increases its pace in an action scene. Music that matches the action and drives the scene will always add to the level of tension and excitement.

Your tools for making an action scene more dynamic are shot variety and coverage, fast-paced editing and the sound FX and music that glue the edit together.

You can watch our Car Chase scene tutorial and download clips to create your own chase at www.videomaker.com/tutorials