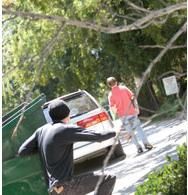 Imagine this scene: Our star walks down a narrow tree-lined alley towards his waiting car, completely unaware of his surroundings. Suddenly, on the lower left side of the scene we see a bandit sneak into view from behind a trash bin. Okay, now freeze the image. Notice the space in front of the star. Now look behind him. See how the bandit behind and the car in front of the star appear to be in focus, while others a little further out aren't?

What we're seeing is a phenomenon called depth of field. It's a powerful tool that has been used by directors and cinematographers ever since the first guy twiddled his camera's lens and noticed that some things looked blurry in the frame while others didn't. Let's find out how it works and what we can do with it.

Confusing Circles
Depth of field is commonly defined as the range both in front of and behind a subject where objects appear to be in focus. It's usually described in two different ways:

Depth of field exists not only as a function of what keeps an image sharp, but also what causes it to be blurry. Without going into the math, it all comes down to something called the circle of confusion.

Imagine a camera with its lens focused on a point in space. That point is represented as a sharp dot on the camera's CCD. However, if the camera moves either closer to or farther away from the subject and is not refocused, the light rays won't come back to form a sharp dot on the CCD. Instead, it balloons into a blurry circle. Often that circle — called the circle of confusion — is too small for the eye to see. Because of this, even images that aren't really in focus are considered to be acceptably sharp. But the moment that the size of the circle becomes noticeable, our images begin to look blurry.

Other factors affect our circle of confusion, and thus our depth of field. These are:

Let's look at each of these factors a little more closely.

Iris? Iris?
The lens aperture, controlled by the iris, can be "opened up" to f4 or "stopped down" to f22. When it is "stopped down," the aperture becomes smaller which creates a smaller circle of confusion resulting in a sharper image. When "opened up", the reverse is true. Ah, but there's a catch.

Though a smaller aperture setting will result in a deeper depth of field, it also means that less light will get to the CCD. This can easily result in a poor image. As a result, this technique should only be used when there is a lot of extra light available to throw on the subject. By contrast, opening the aperture wider will both get more light in the lens and increase the size of the circle of confusion. This will lead to a greater loss of image sharpness and, as we describe it, the depth of field becomes shallower.

Sorry, Size Does Matter
Lenses always focus their light onto some kind of medium. On film cameras, this can be a 35mm piece of cellulose. On prosumer camcorders, it's often on ¼" CCD chips. Since the CCD is so much smaller than its film counterpart, this should result in a tighter tolerance for the circle of confusion. With that kind of physical restriction, most DV cameras should have very shallow depth of fields. Except that they don't.

Smaller CCD sensors require a proportionally smaller lens for their focal length. This — combined with the short focal length of most camcorder lenses — means that a typical DV camera doesn't merely have deep depth of field, it has an extremely deep depth of field. This is both a blessing and a curse. While this extreme depth of field means that both foreground and background objects can be kept in focus, it also means that there is no easy way to achieve the shallow depth of field found on most 35mm cameras. Without that ability, any chance of manipulating a viewer by controlling the focus on screen is lost. Or is it?

Cheats and Shortcuts
If a shallow depth of field is something that you want to achieve, try these techniques:

Conclusion
Controlling depth of field to focus a viewer's eyes is a powerful tool to master. Though it may require some work to achieve, the end result is worth the effort.

Tony Bruno has been making independent films for four years, is an occasional actor, and makes his living as a professional technical writer.

[Sidebar: DIY DOF]
So you've tried everything, but you're still not happy with your shot. Is there any hope? Well, yes… but it's gonna take a lot of work. Check out the DOF Machine Project at: http://www.mediachance.com/dvdlab/tutorial/dofmachine.pdf
This site provides instructions on how to mount an actual 35mm lens to a prosumer camcorder in order to get its nice long focal length for use on your shots. But be warned: The kind of work described (including pulling apart an old DVD player and mounting a spinning piece of ground glass on which to focus the image) is not for the faint of heart. You've been warned.

[Sidebar: Calculator for Dummies]
Like it or not, calculating depth of field means rubbing up against a fair amount of math. If that sounds about as appealing as a Friday 4:30 PM staff meeting, well, don't worry. There are plenty of places online to find handy depth of field calculators.
There are many web browser-based versions. One can be located at the DOFMaster website at: www.dofmaster.com/dofjs.html
For Mac users, there is a handy dashboard widget available here: www.apple.com/downloads/dashboard/calculate_convert/dofcdepthoffieldcalculator.html
These bookmarks and tools are essential to anyone who is attempting to create shallow depth of field shots for their projects.