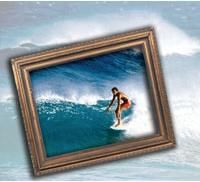 A basic understanding of the rules of composition will help you frame for maximum impact and ultimately enhance the outcome of your finished piece.

One of the best films of the 1990s, in this author's opinion, was a modestly trendy action feature called Lon (known in the USA as The Professional), from French Director of Photography/Director Luc Besson. The story follows Jean Reno as Lon, a professional assassin, and Natalie Portman, in her first professional role, as Mathilda, an orphaned kid who endears herself to the lonely hit man.

Powerful scenes are the norm throughout most of this film; however, there is one scene in particular that perfectly demonstrates the ability of a well-composed shot to tell a complete story. Following eviction from their apartment, with their few belongings in hand, the hit man and the girl take off to find a new home. Using a long lens, Besson places the two characters at the lower right of the frame as they trudge silently through city streets toward their eventual destination. He leaves a vast amount of headroom in the shot, making the characters look very small and lost together against the enormity of the New York landscape. The composition of this scene is extremely powerful, and the message is undeniable.

So, how can you frame shots that will draw in your viewers, enhance your story or even evoke an emotion? First, it helps to understand the basics of good composition. Although there's no set of laws governing composition, conventions have been established over the last one hundred years of motion picture producing and consuming. Knowing the basics will allow you to effectively apply them to your project and meet your audience's expectations.

"Composition" refers to the arrangement of objects within the confines of the frame. The theory of composition was first used in easel paintings and later applied to still photography. However, composition in film and video is vastly different because the subjects can move within the frame and even the frame itself can move. Additionally, shots edited next to one another often depend on frame composition to make sense.

A poorly composed frame is often plagued with large amounts of empty or busy space that do nothing to enhance the message. An easy way to avoid this common mistake is to mentally divide your frame into thirds, both vertically and horizontally. Position the intersections of these horizontal and vertical lines on key points of your subject. For example, if you're shooting an empty vase against the backdrop of a window, you could place the vase to frame right where your lines intersect, leaving the window to occupy roughly the other two-thirds of the frame. By placing the foreground subject just slightly off center, you create an interesting balance for the frame. Still photographers use the rule of thirds as a standard approach to frame composition. The same works for moving imagery; however, it's only a building block to composing an eye-pleasing frame.

Because you'll be working with moving imagery, arbitrary placement of your subject to one side of the frame or another could do more to hinder your efforts than to help them. If you plan to follow a moving subject, you will want to lead your action. This means placing your subject to the side of the frame from which it is moving. For example, if you're following a car moving from right to left, using the rule of thirds, frame the car so it occupies the right third of the frame, leaving room for forward movement in the other two-thirds of the frame.

Guiding a viewer through a sequence of filmed events is one way to define continuity. When framing for continuity, you must consider how you might use the shots in your final piece. For example, if you're filming an interview, two close-up shots of the same "talking head" cut back-to-back would seem jarring, producing what is known as a jump cut. Consider framing your subject in a medium shot and then in a close-up. This will give you options in your edit. Framing a subject from only one focal length or only one angle will force you into a corner and make your final edit very difficult.

There are a number of tricks you can use within a frame to pique interest or force perspective. Here are two for you to consider:

An example of enhancing the static background is seen here. A man is chasing his runaway car down a sloping street. The street in this shot is already at an angle; however, for the shot to work well, the photographer accentuated the angle. Since the street sloped downward from camera left to camera right, the photographer shortened the right leg of the tripod, angling the camera and the frame to the right. This "dutch" makes the angle of the sloped street appear more severe.

As I stated, when it comes to framing, there are no real hard-and-fast laws. Shooting video is a subjective art form. However, having a firm understanding of how best to compose your subjects within a frame and utilizing your subjects within the confines of that frame will eventually allow you to work outside those commonly-used standards. Who knows, you may even create some of your own. 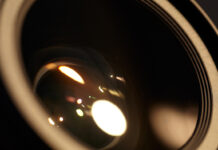