Long ago, in a land far, far away from Hollywood, a young boy saw a movie. It was nothing memorable–
one of those Saturday afternoon "Chiller Theater" television programs. Attack of the Crab
Monsters was the title.

In the flick, a couple of horrific, giant-sized crabs terrorized the residents of a Louisiana swamp. Several
man vs. monster fights took place throughout the film. Of course, man destroyed the bayou beasties in the
end. But the crabs really didn’t die. In fact, they lived on for years. And you know what? They’re still alive
today in the mind of the young man who watched them that Saturday afternoon.

If you haven’t guessed by now, the story above is my own. When I first saw that film, I was 7 years old.
Though I was not of sufficient age to take any action on my newfound interest, I was old enough to make a
decision about my life’s direction. Filmmaking was to be my profession. I said then, as my Mom tells me,
"I want to make monsters scare people." When I turned twelve, my parents presented me with a fully
decked-out super-8 film system. I began experimenting with what I had seen five years prior–the "magic"
of movies. I was totally sold on the fact that a film could convince the audience they were seeing
something that didn’t actually exist or never really happened. I was beginning my journey into the realm of
special effects.

Trial and Error
Special effects are one of the most popular reasons people become fascinated with videomaking. As I’ve
already told you, effects were my impetus to film experimentation. And from conversations I’ve had with
other film and videomakers across the country, cinematic special effects proved to be their starting point as
well.

In those stumbling and awkward formative years, I made many bad movies. And the cause of shame for
most of these pictures was the unprofessional and amateurish special effects. I just didn’t know how to do
the things I was seeing in the theaters or on television. The knowledge required to pull off even the
simplest effect wasn’t readily available in some slick newsstand magazine. What I would’ve done for a
step-by-step guide describing the methodology of some basic special effects…

Just as I was hungry for knowledge in my novice filmmaking days, I’m sure many readers want the
same. And if you’re in this group, you’re in luck. On the following pages are instructions for creating and
shooting more than 30 special cinematic and sound effects. You can create most of these effects with easy-
to-find household items. Some are obvious once you’re aware of the method. Others are more detailed. But
all will hopefully contribute some "magic" to your videos–the same magic that drew many of us towards
this profession in the first place.

Though not as exciting as actual flames and billowing smoke, this effect will give the flickering light we often associate with fire. 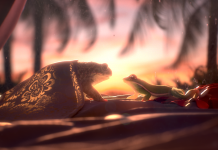