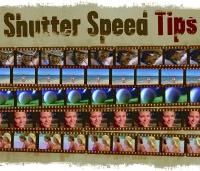 Most of us don’t think twice about the shutter speed that our video camera is using. True: it can be set to manual, but since the camera can automatically take care of it, why should we bother? The answer is that you gain control. And you get control over more than just exposure. This means that you can shoot video that isn’t blurred (or is), that the scenes don’t look too dark, that, in a nutshell, what you’ve shot appears the way you want it to look.

Now let’s take all this and apply it to a video camera which, while it has a shutter, is dealing not with a single image, but with dozens upon dozens of single images strung together. And the speed at which these frames are moving must be both constant and fast enough to create correct looking, full-motion video when played back.
So the video camera shutter is firing very fast as the recording media (video tape, DVD, memory chip) is being bombarded by the light which has been converted into data by a light sensing chip. Still, as the light is first going through a lens, physical properties such as the amount of light in the scene and how fast the shutter is going off apply here just as they do to a still camera. So the faster the video camera shutter fires, the more light is needed to keep the scene from becoming too dark. Being aware of this means knowing when you feel it makes sense to manually change the shutter speed of the camera, speeding it up or slowing it down, depending upon what you’re shooting.

Focus, Depth of Field and The Shutter

We know that when we watch a movie or TV we’re actually seeing a successive number of frames flipping by one after another and that it’s our eye working with the brain that stitches them together to create motion. While a still image that is blurred will be obvious, in a movie, individually blurred frames are less noticeable. In fact, a slight blurring might be a very desirable effect. Video that is too crisp and sharp can have a very artificial feel to it.

To better understand how this all interacts, let’s look at what the terms mean. Focus, at its most basic, is when an object is sharp and clear. Whether focus is for a single object, say a cow in a meadow, or for an entire scene (the cow, the meadow and the mountains in the distance) is the result of the depth of field. This is the range where focus is sharp in front and behind an object. A narrow (shallow) depth of field limits what is in sharp focus, while a wide (deep) depth of field keeps everything in focus, from one foot to infinity. For example, say you focus on an orange sitting on a table. Depending upon the depth of field, the orange could be in focus, while the front of the place mat is not and the chair at the end of the table behind the orange is also out of focus. Sufficient depth of field insures that more than just the object in your sights is in focus. A narrower depth of field is great for artistic purposes or to emphasize a subject.
The camera lens F-stop primarily determines the depth of field. The F-stop is a ratio measure of the size of the aperture (iris). This is all about the amount of light that a lens can gather. When shooting a scene, an F-stop of 1.4 or 2.0, for example, will be able to work in lower light situations, such as when it’s dusk or inside a room with little illumination. Depth of field decreases as the F-stop number shrinks. Conversely, if there’s more light to work with, you can go to a higher F-stop such as 5.6, 16 or 22. The higher the F-stop, the more depth of field there is and so the greater the range of focus. Since the F-stop and the shutter work together to control the exposure, you can choose a lower F-stop and higher shutter or a lower shutter and higher F-stop to maintain your exposure.

Rather than being forced to either leave the camera totally on automatic or make all the choices for yourself, many video cameras have preset scene settings, such as for sports or action shooting, landscapes, night scenes and portraiture. Each of these settings alters the shutter speed to what is more optimal for the given situation. For example, say you’re shooting a football game, which means fast moving people. Freezing the action (on a frame-by-frame basis) requires a very fast shutter speed, say 1/1,000th of a second or greater, assuming that we otherwise have plenty of light. By the same token, using a setting designed for shooting a still life subject means a lower shutter speed, since movement is assumed to be more minimal. In all cases, the frame rate (30 fps) remains constant, since that is defined by the video format.

It’s fine to let the camera’s automation do the work for you, but that shouldn’t make you lazy. Understanding how the shutter speed works is the first step towards deciding when it’s the right time to control the camera by yourself, so that you can get the results you want.

Marshal M. Rosenthal is a technology/entertainment writer whose experience in the industry spans 20+ years.

When you drop the shutter speed to 1/30 or below, you are losing every other line of resolution in your camcorder (unless you are shooting progressive on a special camera). At 1/15, you’ll find that the video is noticeably stuttering. At 1/4 (four frames a second), the video will look rather poor and will show a lot of blurred action. You will, however, be able to shoot in very dark situations and, in our opinion, if that is the difference between getting the shot and not, 4 fps is better than zero.