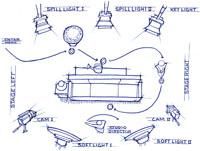 Performing starts with movement and smooth moves on camera
that demand some tricks of the trade.

When normally graceful people get on-camera, they can turn into zombies or klutzes or puppets left dangling. Why is that? Sometimes it’s stage fright, but more often the problem lies in the technical demands of the medium. Technical problems are fixable, as we’re about to show you; so let’s see how to block subject movement and help performers manage their bodies on camera. For convenience in this discussion, subjects (performers) are all “she,” and any shooting area is a “set,” whether on a stage or on location.


Blocking means setting and rehearsing subjects’ movements on camera. All subject movement should be staged strictly for the way it appears on the screen, no matter whether it looks natural in the real world (see the adjacent sidebar). For instance, if a subject enters from the side and walks up to the camcorder, her real-world path would typically be a straight line. When blocking her for the screen, however, it looks quite natural (and often more attractive) to make her path a smooth arc.

Now suppose she has “business” (rehearsed activity) to perform before ending up in front of the camera. For example, she crosses to the ficus plant in the rear and waters it, then moves to a side table, puts down the watering can, and finally takes her position in front of the camera. Each of these three positions has been carefully lit and each requires a slightly different camera focus; so it’s essential that she stop on exactly the right “mark” (spot) at each location

The first two marks are easy because the subject can memorize her position vis-a-vis the plant and the table. To hit her third spot exactly, she’ll need an actual mark – usually chalk or tape – on the floor.

There are three ways she can “hit her mark,” as it’s called. She can track the mark in her peripheral vision as she approaches it. She can feel the heat and brightness of the key light focused on her stopping position (professionals get very good at this), or she can actually look at the mark – a method that works best if she’s supposed to gaze contemplatively at the floor. Whichever her method (or combination), you can help her by rehearsing her full movement path thoroughly before shooting.

A Body in Motion


An ancient director’s instruction to actors: “Don’t just do something, stand there!” It’s hard to stay still and relaxed under the eye of a camera. Subjects stand awkwardly, lose track of their elbows, shift from foot to foot and fidget around unnaturally.

In blocking movements, it helps to end at anchor points: a chair, a lectern – any object that gives subjects a destination instead of an arbitrary stopping point somewhere on a floor.

Wherever they stop, subjects should fall into a relaxed stance: weight on one slightly forward foot, back and shoulders straight but not military. Hands down at the sides get awkward very quickly. Instead, try clasping them lightly together in front of the waist (a very common trick with singers). I prefer to keep my hands with the thumbs and index fingers just lightly touching one another, but that’s just a personal preference.

Holding the arms like this tends to keep elbows away from the body. That way, when a subject gestures with them, the whole arm moves instead of just the forearm. A performer windmilling forearms and hands from closely held elbows resembles a twin engine plane. Generally, when you’re raising an arm to point at something, the elbow should rise with or just ahead of the hand.

Finally, if a subject must remain in position for a lengthy speech, try switching her to a high stool (e.g., a tall bar stool) and then framing a new angle that conceals the stool. It can make things more relaxed for the performer.


Interviews and talk programs are usually conducted sitting down. When taking a seat or standing up, a subject should keep her upper body more upright than normal. Jack-knifing forward to sit or stand looks clumsy.

And please give the camera person a clue. The camcorder has to tilt up or down to follow these movements, often too late to frame an unexpected sit or rise. To prevent this, the subject can signal the videographer with a slight “windup” move first. Before sitting down, she can shift her body just slightly to one side (then correct on the way down, of course). Before standing up, she should move her upper body back or put her hands on the chair arms (if present).

Leg crossing while seated may be all right if the legs are crossed with one knee atop the other and shins nearly parallel. Plonking one ankle on the other knee looks clumsy and reveals interesting things stuck to shoe bottoms. Notice that most news desks include so-called “modesty panels” that block the view of reporters’ legs. For studio interviews, try to avoid low chairs that angle subject knees up like grasshopper legs.

A lot of arm motion can happen when sitting and talking. In general, less is preferable to more; but don’t inhibit subjects who naturally talk with their hands. Instead, frame them in waist shots that fully show hands and arms, or closeups that frame them off. Avoid medium closeups that allow hands to pop in and out of the frame or else wag along the bottom of the screen in a very distracting way.

Some subjects are also head waggers, accenting and italicizing every – third – word with a nod. At worst, the effect on screen is irritating to viewers; even at best it makes subjects look like they’re trying too hard. The only way to cure wagging is to point it out and caution subjects about it. If that doesn’t work, back off from a medium bust shot to a bit wider waist shot, where head movement is much smaller, in relation to the screen.

It’s All in the Eyes

Eye movement is very important for a realistic appearance. For interviews, arrange camera and participants so that the subject looks about 15 degrees off-camera when relating to the interviewer. Watch out for subjects who want to turn sometimes to address the camera. The only people who naturally look right into the camera are politicians! Keep the eye look (i.e., the direction the eyes are looking, or eye line) firmly on the interviewer.

Eye looks are different when two or more on-screen subjects relate to each other. In moving from wide shots to closeups, make sure that the subject’s eye direction matches. It’s all too easy to end up with shots that won’t cut together smoothly because the eye looks are inconsistent.

Instead of talking to another performer, the subject may be reading cue cards, so place them where the second person would be. When using a laptop or a PDA as a prompter, try to place it just over or under the lens instead of to one side. For some reason, slightly too-high or too-low looks are harder for viewers to spot.

To keep speaking to a dead camera looks amateurish. On multi-camera shoots, the pros use peripheral vision to spot the glowing tally light that shows a different camera is now live. If you don’t have that tally light option, a floor director can make a sweeping arc to the next camera, as directed by the director. The talent’s eyes will follow the arc. To make a smooth shift to looking at the new camera, subjects should turn their eyes just ahead of their heads and bodies. If they turn the head and eyes at the same movement, it looks wooden and staged. The eye shift also alerts the camera operator about the intended movement.

When all’s said and done, the key to natural looking screen movement is subject relaxation. Useful as these tips and techniques may be, they won’t work well with performers too uptight to employ them. But getting your subject to relax is a completely different article!

Jim Stinson is the author of the book Video Communication and Production.