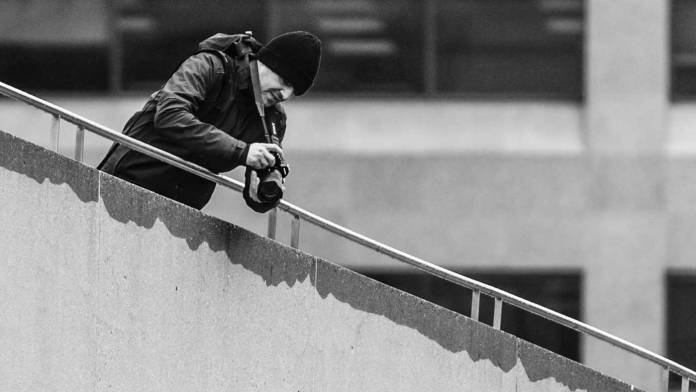 One of our notorious Seven Deadly Camera Sins is Upstanding: recording every shot from the height of an upright adult. Upstanding happens because videographers are usually in that position when the camera rolls and they don’t see any good reason to change it.

In this article, we’ll talk about five common camera angles.

If the viewer can tell that the shot is above or below adult viewing height, then it’s a high or low angle. If the viewer feels like a hawk or like the mouse it’s hunting, the height is bird’s-eye or worm’s-eye. Also, in full shots or closer angles featuring people, the neutral position means the camera’s at the subject’s eye level, whether standing or sitting. Let’s start seeing what different lens heights are good for. The truth is, there’s not just one good reason to avoid upstanding, but four: variety, suitability, practicality and psychology.

How many home movies have you watched that zoomed in and out and panned back and forth (often too frequently for comfortable viewing), but never strayed an inch up or down from Uncle Ezra’s eye level? Despite all their busy motion, these one-height movies eventually grow boring because everybody sees the world from this perspective, so there’s nothing new and interesting.

To spark viewer interest, edit out that pan or zoom and try shooting from a novel perspective. For example, a high angle that reveals a clot of dancers as parts of an intricate choreography or a low POV (Point Of View) that shows why a vase on a coffee table is so fascinating to a two-year-old. Varying the camera height literally delivers new ways of looking at things and novelty is interesting all by itself.

Variety is also useful for editing. We’ve often noted that for a really smooth cut, the new shot should differ in at least two ways from the old one. The available differences are in horizontal angle (say, from 3/4 to profile), subject size (as in full shot to close-up), and lens height (e.g. high to neutral). By ignoring height changes, you lose a full third of these available options. This reason alone should have you looking for new and appropriate camera heights.

What’s appropriate for your scene? This may be the most vexing question in video. For any one shot of any single subject, there may be a theoretical best camera angle, the perfect one for that shot. The trouble is, no two directors will agree on what it is. But, as Supreme Court Justice Potter Stewart once said (about a very different subject), “I can’t define [it], but I know it when I see it.”

A good director has a killer instinct for that perfect setup, an ability to find the combination of horizontal position, subject size and lens height that feels exactly right for this subject at this moment.

A good director has a killer instinct for that perfect setup, an ability to find the combination of horizontal position, subject size and lens height that feels exactly right for this subject at this moment. If it’s the toddler looking at the vase on the table, a low angle makes obvious sense. If it’s alternating close-ups of a boss and an employee, the decision is subtler, as we’ll see in a moment. In general, just keep in mind that height is one-third of every setup description and one height is usually more suitable than others.

Sometimes, the reason for choosing one height over another is purely practical. High angles are great for excluding unwanted overhead elements.

If the lights or the microphone boom want to sneak into the image, a higher angle will more easily frame them off. On location, raising the camera so that the top of the frame stays below them can eliminate unwanted backgrounds.

High-angle wide shots are great for establishing geography and ambiance, introducing and making visual sense of the teeming bazaar before we plunge into it and start teeming ourselves. For example, say the olive oil merchant is over here and the amphora potter is over there. When Ali Baba strolls from one to the other we can look down and track his progress through the throng.

Low angles are also useful for concealing unwanted backgrounds, if only because you can’t see very much except ceiling or sky. They also lend themselves to dramatic compositions and, with wide-angle lenses, to dynamic, exciting movement. And with that, we move on to the psychology of different camera heights.

High and low camera angles convey distinct feelings and a skilled director exploits them fully. Birds-eye and very high angles are lofty, detached and, literally, above it all. A crane shot that begins high above the bazaar and then booms down among the shoppers is visually moving from distant and cool to immediate and warm.

High and low angles are complementary, especially in conveying strength or weakness. Encounters taped in traditional pairs of opposing close-ups will often use a mild high angle so that the dominant person’s POV looks down on the less powerful subject (think about a dialog between the boss and an employee). The weaker person’s POV will be a moderate low angle that peers at least slightly up at the strong subject. To experiment with these angles, try the activity suggested in the sidebar.

Very low angles tend to be claustrophobic, perhaps because they reproduce the perspective of childhood. We can’t see things through the forest of legs and furniture and everything and subconsciously want to get up where the view isn’t blocked. Worm’s-eye angles are very unsettling because the whole world is running right over us, which is why ultra-low perspectives work great for races, buffalo stampedes and other dynamic action.

The obvious way to frame high angles is by taking the camera to a roof, a balcony, a staircase, or any other platform raised above the action. (It should not be necessary to add that high places can be dangerous and eager videographers should exercise good sense.)

External view screens allow you to shoot with the camera held over your head. For even greater height, attach the camera to a monopod, tilt the screen almost straight down, set the lens to wide angle, press record and raise your impromptu rig to working height. Though you can’t see the screen very well, the wide-angle setting will compensate for mis-framing.

Nowadays, sophisticated jib arms are within financial reach of prosumer videographers. With these rigs you can operate remote pan, tilt and zoom controls while watching a view screen at one end of a boom, while the camcorder high at the other end does your bidding.

If you need to ride high throughout a long event like a game or parade, you may be able to rent a cherry picker rig that can raise you up to 20 feet. A word of caution, though: cherry pickers make adequate fixed platforms, but they move far too jerkily to be used for motion as you can with a crane. Also, they require competence in safe setup and operation, a point to be determined between yourself and the rental agent and, of course, you’ll need permission from the venue.

Low angles are easy because external LCD screens allow you to take the camera away from your eye. To boom up from a low angle, hold the edge of the screen in your left hand and rotate it to keep the frame in view as you raise the camcorder.

Low angle moving shots can be very dynamic, especially at wide-angle lens settings. For a dramatic commercial-style shot of a car wheel steering along a mountain road, simply mount the camera on a monopod and hold it outside the passenger window upside-down (it’s simple to invert the shot digitally). If you try this, however make sure you have a clear lens filter mounted to fend off small stones. A student of mine once taped his parents’ camera to a radio controlled toy SUV and let ‘er rip. Though the results were spectacular, I thanked the Powers That Be that I’d known nothing about it until I saw the footage.

As an experiment, shoot a very short scene of a boss and an employee. In the wide establishing shot, make sure they are about the same height and place the camcorder at their eye level. Next, shoot all the dialogue in matched opposing close-ups, with the lens looking slightly down at the employee and up at the boss.

Finally, re-shoot the close-ups the opposite way: looking down on the boss and up at the employee. When you screen the edited sequences, you may
see that the boss feels properly powerful in the first version, but less so in
the second.

BOSS: I don’t want excuses, Smithers. I want you here on time.

EMPLOYEE: I know. The trouble is…

BOSS: Whatever it is, it’s not my trouble!

EMPLOYEE: No, of course not, sir.

BOSS: Too much trouble for you, is it?

EMPLOYEE: Oh no, no trouble at all!