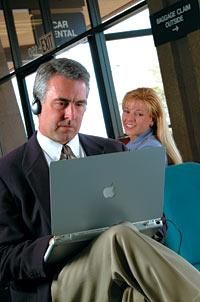 Processors and hard drives, more powerful yet more compact than ever, have combined with the latest video editing software to result in a surge in laptop turnkey systems.
It’s not uncommon for airplane passengers seated near you to hammer away on their laptop keyboards. While it’s likely that they are fine tuning a business report or composing an e-mail, it is also conceivable that they are editing video footage of a summer trip to the Bahamas.

Portable laptop video editing systems are becoming increasingly popular. Faster processors and small-size but large-capacity hard drives make it feasible for laptops to handle the rigors of video editing. And just like the desktop turnkeys, these laptops are pre-configured by the manufacturer so you don’t have the worry and inconvenience of doing it yourself. With this kind of versatility and power all in a totable package, what’s not to love?
If you’re an on-the-go person and in need of an editing system that goes with you, take along our laptop editor buyer’s guide and get going!

Sony offers 11 Vaio laptops that all feature Adobe Premiere LE and DVgate and MovieShaker editing software and i.LINK (IEEE 1394) input. The least expensive of the Vaio’s is the PCG-FX120 priced at $1,700. It has a 700MHz processor, a 10GB hard drive and 64MB RAM. It includes Sony’s MovieShaker and DVgate editing software and Adobe Premiere LE. The PCG-FX190K features Sony DVgate and MovieShaker software, an 850MHz processor, 128MB RAM and a 30GB hard drive. Its suggested retail price is $3,700.
Apple Computer’s two Titanium PowerBook G4s come installed with Apple’s iMovie 2 editing software. The beginning editor will appreciate the simplicity of iMovie 2 but those looking for more bells and whistles may want to consider upgrading to Apple Final Cut Pro or Adobe Premiere. The PowerBooks come with either a 400MHz G4 PowerPC processor with a 10GB hard drive or a 500MHz G4 processor with 20GB of hard drive storage. The 400MHz retails for $2,499 and the 500MHz for $3,599.
ProMax Systems, Inc. takes Apple PowerBooks and adds larger hard drives and more advanced editing software. The company’s FireMax Portable Final Cut Pro 400 sells for $4,935, has a 20GB hard drive and 256MB RAM, and comes with Apple Final Cut Pro editing software and Boris Graffiti title and animation effects plug-in installed.

Dell and Gateway have also joined the ranks of companies offering laptop editors. The Dell Inspiron 8000 retails for $2,971 and features Dell Movie Studio software, a 900MHz processor, 128MB RAM and a 20GB hard drive. Gateway’s entry into the laptop-editing scene is the Solo 9500. It comes equipped with an 850MHz processor, a 20GB hard drive, 128MB RAM and a sticker price of $2,899. Be aware that while the Solo 9500 can edit video it does not come with any editing software.
DVLAPTOP.COM, Inc. specializes in configuring PCs for video editing. Its DESMV Midline features a 1000MHz processor, 32GB hard drive and 256MB RAM. With this system you get your choice of editing software: Digital Origin EditDV or Adobe Premiere 6.0. It retails for $3,999.
As time goes on, look for more companies to begin offering laptop editors and watch for the prices to go down and the features to go up. And who knows? Someday it could be YOU putting the final touches on your vacation video as the flight attendant reminds you to "put your tray and laptop in its original upright position."