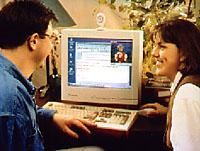 "Computer! On Screen!" That’s all it takes for Captain Jean-Luc Picard of Star Trek: The Next Generation to get full-motion, full-screen visual communication with anyone in the universe. In fact, almost all futuristic science fiction has crystal clear video conferencing at little more than the touch of a button. Meanwhile, back here in 1999, live, personal telecast technology is in its infancy.

Right now you can send live video images around the world with a WebCam and an Internet connection. Although these images cannot yet be delivered at full speed (most display just one frame every few minutes) or full screen (typically the images fill less than one quarter of the viewing area), WebCams are growing in popularity. WebCams are the latest trend on the Internet. People around the globe have set up live WebCams that anyone in the world can access from a home computer.

If this is unfamiliar territory, you can check out some sites on the Web that tour the Live WebCams ring (and avoid the X-rated sites that come up if you use standard search engines). At sites like www.earthcam.com and www.webring.org, you’ll find links to WebCam sites that let you take a live peek at places all over the world. From an office in Chicago to the beach of San Sebastian Spain or O’Connell Street Bridge in Dublin Ireland, there are a wide variety of interesting WebCam sites to explore.

So what does it take to set up a WebCam of your own? Not too much: a Web page, a camera, some software and possibly a video capture card.

There are three categories of cameras that can capture the live images you want to publish on the Web. First, there is the standard camcorder – any platform. If you already have an analog video camera with a compatible video capture card or a digital camcorder with a FireWire connection to your computer, you’re 2/3rds of the way there. The only thing missing is the software and a Web site.

If you don’t have a camcorder, or you do but don’t want to tie it up by connecting it to the Web, you can use a digital still camera. Not only will it allow you to capture images through its lens, but you can archive the pictures saved in its memory and show them on your site too.

WebCams are designed specifically for this type of operation. They are usually small cameras that don’t use videotape and have limited manual controls. This type of camera is the focus of this buyer’s guide.


When looking for software you should first know the capabilities of your computer. One way to get your WebCam up and running is with still image software. This type of software uses your Internet connection to upload a single snapshot at a time, refreshing the Web image at varying rates (often every 30, 60 or 90 seconds). Any Internet user, even those with slow modems, can view your live images whenever you’re connected to the Web.

Streaming live video takes a lot more resources. Not only do you need broadcasting software, but you’ll probably want a computer dedicated to hosting the video and a fixed IP (internet protocol) address. Because of these requirements and the high bandwidth that a 24-hour full-motion video WebCam requires, not too many individuals broadcast live streaming video on the Web at this time. Currently big businesses and those with high-speed connections to the Net, like cable modems or DSL (digital subscriber line) service, use this method.

Generally, when you purchase a WebCam, it comes with everything you need to make it work. WebCams that hook up to the computer via a USB or parallel port need only software and do not require a capture card. Alternately, some WebCams (such as the Winnov’s Videum Conference Pro and Best Data’s The Smart One) come complete with video capture cards. These WebCams usually boast an increase in image quality, at a price: you must install and configure the video capture card yourself.


The nice thing about setting up a WebCam is that it doesn’t have to be a major investment. For under $100 there are several products with lots of software options. For example, Ezonics Corporation sells the EZCam ($70) that comes with a nice variety of the typical software included with most WebCams. It captures video and still images, does video e-mail and has video conferencing.

In the same price range is Creative Labs’ Video Blaster 3 ($80). Included in its software package is Video Blaster WebCam Monitor, an application that detects motion around the PC and takes a snapshot, then automatically uploads it to your Web site so you can see what’s going on from afar.

On the higher end is Intel’s new PC Camera Pro Pack ($129). It has an RCA input, so you can transfer the video from an analog camcorder into the WebCam and then onto your computer without a separate video capture card.

If you’re on the go with a notebook computer, Winnov has the VideumCam Traveler ($299). All the features of Winnov’s Videum AV capture boards are contained in the portable camera. With an optional desktop interface card, you can also connect the VideumCam to your desktop computer.

There’s no doubt that as the technology advances, video communication will increase. The WebCam is one of the first devices to bring us this technology. Posting live video is challenging, but the beginning of science fiction becoming reality.