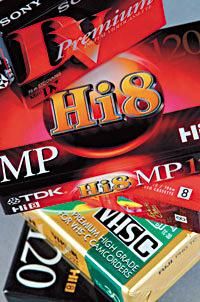 After you’ve shelled out several hundred dollars for an initial camcorder purchase, what other expenses can you anticipate? A spare battery, a camera bag, a tripod, headphones, maybe a microphone, and, of course, loads of blank videotape. Unless you bought a camcorder that records onto a disc or hard drive, blank tape is the one purchase that you’ll have to make over and over again during your camcorder’s lifetime.

So, what kind of tape should you get? How can you tell one brand from another? How do you know which tape is best for your needs? Is it really worth it to purchase the more expensive grades of tape, or are they really all just the same?

If you care at all about the kind of videotape you use to record your masterpieces – and we know you do – read on. We’ll break it down for you in a few short pages.

But before we look at the specs, here are the three most important things to keep in mind when you are purchasing blank videotape:

If you stick to these three basic rules, you should avoid most of the problems associated with bad videotape. For more specific information on tape grades, tape formulations, tape formats, etc., read on.

Though there are many different manufacturing processes and materials used to make videotape, most brands, formats and grades of tape consist of four basic parts:

The quality of the videotape you find inside the cassette is a function of the quality of these four items, plus the methods used in manufacturing the tape. Note, however, that using high-quality videotape doesn’t usually give you better resolution or a more colorful picture; it just gives you a more rugged product that won’t break down or succumb to dropouts. (The main exception to this rule is ME tape; look for more on this later.)

Of course, the quality of the cassette itself is also important. Often, with a low-quality cassette, the two reels on which the tape is wound will have a tendency to freeze up and stop rotating, ruining the cassette and all video recorded thereon. Also, the outer shell of the cassette and the tape door need to be constructed of thick, rugged plastic to avoid breakage on those (hopefully rare) occasion when the tape gets dropped or otherwise knocked about.

Finally, the quality of the box or tape case is also an important factor. Some bulk tape providers don’t provide a box or case of any kind. Most grocery store-bought T120 VHS tapes come in flimsy cardboard boxes; these are certainly better than nothing, but they do have a tendency to fall apart with repeated use. Other tapes come in plastic cases of varying quality. One of the chief selling points of professional videotape cassettes is the top-quality tough plastic cases they usually offer; this contributes greatly to the life span of the cassette.

As noted above, the tape’s quality primarily boils down to the quality of the materials and processes used in its manufacture. Perhaps the most crucial of these is the type of magnetic dust particles affixed to the business side of the tape. Some tapes, for example, including almost all standard-grade 8mm and Hi8 tapes, have the letters "MP" in their name, which stand for Metal Particle. (This is a misnomer of sorts, as all videotapes use some type of metallic particles to store a video signal magnetically.) MP tapes use pure metal particles instead of oxidized metal, which results in a much greater ability to record and hold a signal. Another type of tape you’ll commonly see is ME (Metal Evaporated) tape. The main differences between ME tape and MP tape are the quantities of metallic dust deposited on the tape (ME has much more), and the manufacturing technique used to bind the dust to the tape, a process called "vapor depositing." This results in two things that are of importance to the videographer: increased tape performance (even resulting in slightly better resolution), and decreased overall ruggedness and ability to withstand rigorous use.

Because ME manufacturing techniques don’t utilize a coat of adhesive to affix the metal particles, these particles have a tendency to flake off, causing dropouts. Some manufacturers have tried to beef up the strength of their ME tapes through various technologies. Sony, for example, offers its "Diamond-Like Coating" to help preserve the integrity of its ME tapes. In general, ME tape is used for shooting (if at all), and MP tape is generally used for linear editing and storage.

The technical terms for a tape’s ability to record and hold signals are coercivity and retentivity. Coercivity is defined as any magnet’s ability to be "coerced" into receiving an electrical charge (such as a video signal), measured in Oersteds (Oe). Retentivity, on the other hand, is any magnet’s ability to retain a charge over time, measured in Gauss. These are perhaps the most important technical statistics regarding videotape quality, but unfortunately, they’re usually not statistics that the manufacturers are willing to provide. The one thing you can usually be sure of is that a certain manufacturer’s higher grade tape will have greater coercivity and retentivity than its lower grades.

Several factors – price, tape format, brand name, casing type, and whether to buy bulk or not – may play into your blank videotape purchasing decisions. In general, higher-quality videotapes will not give you higher-quality pictures. However, as a result of more solid construction, they may last longer.

Three of the most important things for consumers to consider when purchasing videotape are:

How a Signal Gets Recorded to Tape

The simplest way to record a signal to tape is to apply a magnetic charge to it as it passes over a stationary record head. This is how most audio tape recorders function.

Videotape, on the other hand, utilizes the helical scanning technique. Inside a camcorder or VCR, you’ll find a circular drum that’s positioned at an odd angle relative to the tape; that’s the record head. It rotates at precisely 30 revolutions per second, corresponding to video’s 30 frames per second. As the tape moves past the record head, it usually records a single frame of video for each angular (helical) pass. 8mm tapes reserve a tiny portion of the end of each helical scan for recording audio and time code, whereas VHS formats generally utilize a simple linear audio track or two for audio. VHS-family hi-fi stereo audio is the exception to this rule. In VHS hi-fi systems, the audio track is actually embedded within the video signal. In the case of digital tape formats, the record head spins much faster, and each pass records a discrete block of data rather than a single frame.

Is Bulk Tape Worth it?

In the pages of our magazine, in mail-order catalogs and on commercial Web sites, you’ll often find ads for large quantities of blank tape offered at substantial discounts. To discover whether it’s a good idea for videographers to purchase this bulk tape, we spoke with John Waring, a professional videographer and tape duplication specialist. John specializes in creating tape duplications for local school districts, and he uses bulk VHS videotape for the majority of his distribution projects.

"The thing about bulk tape," Waring said, "is you have to use it for what it’s intended for, which is large-scale distribution. Say you’re a wedding videographer, and the client wants 200 copies of the ceremony to give to family and friends. Bulk tape is a great way to go. It’ll hold up pretty well over time, especially when you consider that people probably won’t play it very often over the long haul.