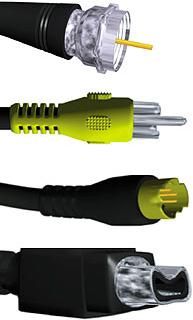 While you may often overlook them, cables are the only way you to get a video signal from one piece of video gear to another. And like a steel chain, your editing system is only as strong as its weakest link. In many edit bays cheap cables are the weak link. Its ironic that video enthusiasts will spend thousands of dollars on camcorders, switchers, mixers and computers for editing the best quality video possible, only to connect these high-end tools together with shoddy, cheap cables that compromise the quality of their footage. This article will introduce you to a variety of high quality cables suitable for video. There are four main types of cable common to video: RF, composite, S-video and IEEE 1394. For a detailed technical look at how these cables work, see

RF, or radio frequency cable, was made popular by cable TV. It sends both audio and video down a single wire. It is inexpensive, but RF modulation of your video signal can seriously degrade it. You should avoid using RF cable in your editing configuration at all costs. That is to say, do not use RF cable anywhere in the signal path between your source and record VCRs. RF cable should be used only outside the primary signal path: perhaps if you are hooking up a TV to monitor the output of your record VCR.

Probably the most common cables in consumer video are composite or RCA cables. Composite video cable carries a mixture of the black-and-white (luminance) and color (chrominance) information. Physically, a composite cable consists of two separate wires in one casing running parallel to each other down the length of the cable. The power wire corresponds to the tip of the connector and the ground wire links to the outside ring.

You will often find composite cables sold as three cables bound together, with yellow, red and white tips for carrying composite video and stereo audio. Composite cables are inexpensive, but work well for connecting video components. You can find six-foot cables made by RCA for $7, $10 with gold connectors (see the "Cable Tips" sidebar). TecNec makes a more-expensive cable. Their 6-foot cable with gold connectors sells for $18, while the 10-foot gold-tipped cable sells for $22.

S-video cables are also known as Y/C ("Y" for luminance and "C" for chrominance). The separation of black-and-white and color signals is what makes S-video cable better than composite. This separation reduces image degradation and signal loss substantially, providing one of the best means for transferring video signals. The cabling constructions of composite and S-video are different. S-video wire consists of two pairs of wires instead of a single pair.

The biggest benefit of S-video cable is its ability to reduce color-bleed and crawling edges. Splitting the color and black and white signals preserves higher resolution video delivery throughout the editing process.

Even with the benefits S-video cables afford the videographer, some drawbacks exist. While it is standard practice to keep cabling as short as possible, this holds especially true with S-video cables. When S-video cable surpasses 25 feet in length, the signal noticeably degrades. You can try line amplifiers to boost the signal strength and improve resolution for long distance connections, but these devices have a downside. Amplifiers, or any in-line device for that matter, will add a significant amount of noise to the video signal.

For best results, use S-video connections throughout your entire video set-up. That way you can realize the advantages of the technology. Even a single composite cable in the sequence can negate the benefit of the other Y/C cables. The only safe place for a composite cable within an S-video set-up is out of the signal stream. A composite cable attaching a monitor to your record output is one such example.

S-video connections are standard on S-VHS, Hi8 and DV equipment. Because more and more consumer electronic devices, such as televisions and DVD players, feature S-video, you can easily find them at electronics stores. You can buy a six-foot S-video cable from Radio Shack for $14. One of the best-known names in cables is Monster: their one-meter (about three-foot) S-video cable sells for $25, their two-meter (six-foot) cable is $35, and their four-meter (12-foot) cable is $60. You can also purchase cables from mail order companies such as Markertek (www.markertek.com). Markertek offers TecNec S-video cables for $20 (six-foot), $25 (10-foot) and $35 (25-foot).

Known as FireWire, IEEE 1394 or i.LINK, if you have a digital camcorder, youve probably become familiar with this cable. Digital signals differ from typical analog video signals in that they consist of a long string of numbers in binary notation. The information travels as only one of two values, one or zero, as opposed to analogs process of interpreting a varying rate of voltage. This digital transfer eliminates the signal loss inherent to analog transfers. In theory, a signal could be transferred an infinite number of times without ever showing image degradation.

One downside of FireWire is that it has a limited cable length. FireWire cables are limited to 4.5 meters or about 14-feet. However there are new signal boosters, like Orange Micros FireWire Repeater ($70), that promise to carry the signal greater distances.

Even if your cable choices are correct, theres yet another, seemingly insignificant part of the system that is capable of diminishing video quality: the connectors. Its vitally important to keep all connectors spotlessly clean, or else theyll develop oxidation. Over time, the oxidation degrades the quality of the connection. With the small contact area involved in a video connector, even the tiniest blockage or erosion can create a noticeable problem. The gaps formed from the oxidation residue allow connectors to experience resonance from air born and equipment-based vibration, introducing video noise into the system.

Although they may sometimes seem like insignificant extras, cables are not a good place for videographers to cut corners. Remember, your editing configuration is only as good as its weakest link.