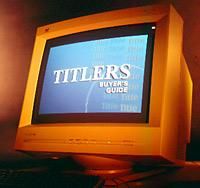 Strong titles on your videos, like firm handshakes, make good first impressions. From the beginning of a production, the graphic elements of your titles’ color, size and style can set the tone and nature of a production.

The fun thing about titles is that they can be made out of anything. From paper cut-outs to crayons to words videotaped off billboards, the possibilities are unlimited. (See Titling for Under a Buck in the August 1998 issue of Videomaker). However, if you’ve decided it’s time to add some professional-looking titles, this buyer’s guide will give you a start at finding the right product for your needs.

There are two basic types of character generators: The stand-alone unit, used in many linear editing systems, or there are computer based programs. One of the least expensive stand-alone units is Sima Products’ SCG-2 Screen Writer Plus ($150). In this affordable box, you get a ten page memory capacity with battery back up and four letter sizes but are limited, however, to one font style.

Videonics Personal TitleMaker for $399 provides 24 special effects for transitions between title screens, including cuts, fades, wipes and more. There are eight speeds that can apply to each effect and seven font styles to from which to choose.

The stand alone products that range in the $1000 and up area are mostly aimed at professionals and broadcast television producers. For example, Video Data Systems’ System 840 is tailored for applications like video promotions, announcements and emergency bulletin displays including NOAA Weather Satellite information. Clearly, this is a product surpassing the needs of the average hobbyist.

If you have a personal computer, or are already outfitted with a computer-based nonlinear editing system, then a software solution may be preferred. Many of the tilter programs are designed for a specific editing program. Also, many of these programs utilize TrueType fonts or PostScript fonts that are ever growing expansions downloadable from the Web or you can purchase them on a CD-ROM or floppy disk.

Cayman Graphics has four variations of its Power CG program that range in price depending on the features and NLE programs they plug into. At $99 the Power CG Lite is inexpensive and compatible with FAST Video Machine, in-sync Speed Razor, Adobe Premiere, Ulead Media Studio, and many other systems. It boasts over 16 million font styles and background colors, 1000 levels of undo.

Crystal Graphics 3D IMPACT! Pro for $149 focuses on adding animation to three dimensional logos, titles and objects. With it, you can add drop shadows, sparkles and reflection effects to characters designed for video or Web pages. It can import and convert 2D artwork Into 3D and includes 120 predefined animation paths.

In the mid-price range is Inscriber Technologies’ TitleMotion. TitleMotion is designed to be a professional graphics plug-in for creating video titles and motion effects. It has the ability to create multi-layered animations to fly in text, graphics and logos. In addition, the user can create paths for objects to move around the screen following customized motion paths.

Generally speaking, the more you spend, the more features the titlers will include. Note that some higher-end titlers are designed specifically for television and broadcast productions and may include much more than the average videographer needs to spice up the average home video. Nevertheless, a few dollars invested in a titler can improve the look and feel of your videos immensely.