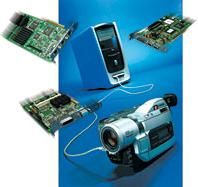 If you have a Mini DV or Digital8 camcorder, you’re going to want to get a FireWire (also referred to as i.LINK and IEEE 1394) card. These devices are easy to install. If you have an analog camcorder (like any from the 8mm or VHS families), you’re going to need an analog digitizing card. These are a little trickier to install (see the Proceed With Caution sidebar). If you have some analog video and some digital video, you may want to consider a card that has both kinds of inputs (or you could use an analog-to-digital converter or record analog footage to DV tape for transferring). Lastly, if you don’t really plan to edit your video, but want only low-res video to put on the Web, you can get by with an inexpensive external device. Let’s take a look at what’s out there.

Next consider the types of inputs and outputs. Obviously, if you’re using Hi8 with S-video outputs, you’re looking for a card that has S-video, and if you’re using a camcorder with IEEE 1394, you should look for FireWire in/output.

Then you need to consider the maximum resolution of the card. You’ll notice that analog-only cards tend to max out at 640×480, while the DV-capable cards usually go to 720×480. You’ll find most of the external capture devices limit themselves to 320×240, or half-screen.

There are still a lot of options available for the analog videographer. If you’re a Mac user you should take a look at the Aurora Video System Fuse001 capture card. It lists for $499 and offers S-video and composite inputs. It runs on a G3 with 128MB of RAM.

If you’re running a Windows box you have more options. You could get something as simple as a $99 Pinnacle DC10plus. It has S-video and composite video inputs and also includes Pinnacle Studio software.

If you’re really serious about your video editing, you should take a hard look at the NewTek Video Toaster for Windows. This $2,995 card doesn’t compress the video, which improves the quality. It requires an NT or Windows 2000 box with a Pentium III 450MHz with 256MB of RAM and some substantial hard drives. It also includes in:sync Speed Razor SE editing software. This is a more serious capture card for people expecting to get higher-quality results.

Windows 98 users can get an AVerMedia AVerDV card for $60. It requires a Pentium 233MHz or better. The particular type of file this card creates isn’t in wide use, and not very many software titles can use it yet. So, beware of its enticing price, until you first find the software you will use with it.

A Little Bit of Each

If you’re shooting analog and digital, you may want to get a card that can input both types of video. Many of these cards are popular on the higher end of the consumer market.

Canopus makes the DVRexRT Professional card. It sells for $4,599 and requires Windows NT or 2000 and dual Pentium III 450MHz with 256MB RAM. With this, you get a substantial cut in the amount of time it takes to render effects. It includes component, composite, S-video and FireWire ins and outs and includes Adobe Premiere.

At the low end of the market, Dazzle makes the DVE-SE card available at $70. It’s made for Pentium II/400 class or better machines running either Windows 98 or NT4, and comes bundled with Adobe Premiere as well as Dazzle’s own Fast Forward software.

For Web or Disk Only

If you’re not outputting to VHS, but only want to get your video onto the Web or burn it to disk, you can get by with an inexpensive less-than full-frame full-motion digitizer. These are generally external devices that don’t require you to crack open the case to install them. They come with either a parallel or USB connection. You should try to get a USB model if your computer supports USB (Parallel is another name for printer port).

If you’re running Windows98, the Pinnacle Studio OnLine is worth checking out. It costs $69, and has composite inputs. It digitizes video at 320×240 at 30fps. It consists of a USB cable that connects an analog camcorder or VCR to your computer. It comes with simple editing and access to Pinnacle Systems’ free video sharing Web site.

The Dazzle Digital Video Creator comes in both USB and parallel models. The USB retails for around $200 and the parallel is $250. They use MPEG-1 and encode 352×240 video at 30 frames per second.

There is a vast range of capture cards and digitizers available. Deciding on the right one takes some analysis. The first thing to do is figure out the type of inputs and outputs you need (analog, digital or both). Then look at the system requirements it takes to run them. Our buyer’s guides list the minimum, so you might want to have a beefier system to get optimum performance from the card you purchase.

Whether or not you need audio capture is important to consider, as well as whether you need editing software and how extensive that software should be. You can check out our March 2001 issue for the latest editing software buyer’s guide. In general, you can use our grids to compare the facts and then look in past issues or on our Web site (www.videomaker.com) to see if we reviewed them. The most important thing is to start editing!