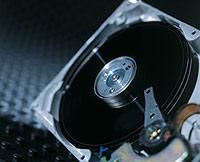 Video storage products, like many of today’s electronic media, can take many forms: they can be tapes, (both analog and digital), CDs, DVDs, hard drives or even stacks of hard drives working together. The two most common types of video recording products, however, are the video cassette recorder (VCR) and the hard drive. The VCR records video to and from tape in a linear fashion, and the hard drive works in conjunction with a nonlinear editing computer or appliance.
Not just any hard drive or VCR will meet the needs of the video editor. Video editors (both amateur and professional) have more demanding goals for their hardware than typical consumers do. Whether it’s a fancy VCR with all the trimmings or a fat hard drive for a sleek nonlinear editing system, the hardware that video editors use to store and record video must be durable, usable and ultimately capable of producing a high-quality end product.

Shopping for VCRs and hard drives for video editing can be a daunting task, but with the guidance you’ll find in this article and the accompanying buyer’s guide grids, you’ll soon be making purchases that will enhance your video editing suite without ruining your budget.

On the surface, it might seem that an ordinary home VCR would work just fine for video editing. After all, if you’re just copying selected scenes from the camcorder to the VCR, you can just use the pause and record buttons, right? Well, yes you can, but if you’ve ever tried editing that way, then you probably have a sneaking suspicion that there’s a better way to get the job done.

For one thing, you may notice that the scenes you copy onto your VCR all begin and end with a glitcha momentary loss of picture information for a fraction of a second, or perhaps even a series of rainbow-hued bands that appear for a second or two. If this happens to you, then your VCR lacks an essential feature of the editing VCR: a flying erase head. To put it succinctly, a VCR without a flying erase head is incapable of making smooth cuts between copied scenes. If you use this method of editing, and you want your videos to be watchable, you need to use a VCR that has a flying erase head. (Luckily, this is a fairly common feature, and you don’t have to spend much money to obtain such a VCR.) If you’re using your VCR solely as a means of inputting scenes onto a hard drive for nonlinear editing, then it may seem like a flying erase head isn’t as important. It’s a good idea to have one anyway, so you won’t get those nasty glitches when you export your finished video back out to VHS.

Another thing that really comes in handy when using a VCR to edit video is some way to move tape in small, single-frame increments to find in and out points on the tape (jog), or move back and forth rapidly over large expanses of tape (shuttle). The best way to do this is with a standard jog-shuttle controller, which consists of an outer wheel for shuttling and an inner dial for jogging frame-to-frame.

Many of today’s camcorders have built-in editing features that allow you to select certain scenes for copying to the VCR. Some of these systems use infrared signals to control the VCR you’re recording the scenes onto, while others use wired connections to accomplish the same task. If your camcorder uses a wired connection, make sure the VCR you purchase for editing has the same kind of wired connection (called an edit control protocol). These connections have names like Control-L, JLIP, Panasonic 5-pin and others. Also, the inclusion of an edit control protocol allows you to upgrade to an edit controller at a later time. (Some higher-end VCRs even come with an edit controller built-in, so you can build complex edit decision lists for highly accurate editing.)

Edit control protocols were once more important than they are now. Back in the early days of video editing, editors did most of their work directly from tape to tape, with a pair of VCRs (or even three VCRs, if A/B-roll editing was the goal) connected by an edit controller. Nowadays, however, nonlinear editing has become so inexpensive and digital camcorders so common that not many people consider this form of editing anything but a relic from a bygone era. Any home video editor who’s thinking of setting up a tape-to-tape editing system with all the bells and whistles should look seriously at the cost and consider going nonlinear, especially now that full-featured FireWire nonlinear editing systems are available for around $1,300.

Another thing you might want to consider is whether or not to purchase a digital VCR of the same format as your camcorder. Digital VCRs are expensive, especially when you consider that their role in a nonlinear editing system (i.e. recording video to and from the hard drive) can be performed by the camcorder alone. Still, if you’re thinking of someday going pro with your video talents, you might want to consider purchasing a digital VCR that you can install as a permanent part of your editing suite. Why? Because professionals end up using their gear for many hours, and it’s not always a good idea to put all that editing wear and tear on your camcorder. Also tying up a camera in the edit bay when it could be out in the field on the next shoot slows a busy production cycle and may end up costing you in the long run.

With all this information in mind, let’s take a quick look at the options for a nonlinear system’s recording apparatusthe hard drive.

The Heart of Nonlinear


The triumph of inexpensive nonlinear systems can be attributed to two simple factors: the success of FireWire as a standard for transferring digital video to and from the hard drive, and the increased performance and lower cost of hard drive storage.

In the early days, video capture cards were expensive, and the hard drives used to store and manipulate the video were likewise only attainable by professionals with large budgets. Today, however, it’s possible to purchase a video-friendly hard drive with 30GB of storage space for under $200. (Those of you who have been into video editing for a few years, sit back for a moment and reflect on what a wonderful thing that isa 30GB hard drive for under $200! It boggles the mind.)

Size, however, is not the only thing to consider when purchasing a hard drive; speed is also an issue. Once upon a time, hard drives that were fast enough to handle video were difficult to come by. Vendors advertised drives that were optimized for video. Now, however, hard drives that can handle video are very common. Nonetheless, you still need to be careful when purchasing a hard drive for video editing. Not all are capable of handling the task. Make sure you purchase a model that has a fast sustained data transfer rate, preferably something in the realm of 5MB per second or faster.

If you’ve shopped for a hard drive recently, then you know that there is a bewildering range of different types of drives available, with names like SCSI-2, Ultra ATA, UDMA/66 and so on. Without going into any technical details, here’s the lowdown on how to select a drive that’s right for you:

1) Get a drive that matches your computer. Thus, if your computer has a motherboard that incorporates UDMA/66 technology, then get the best UDMA/66 hard drive you can afford.

2) Unless you’re a techno-fanatic who has to have absolutely the best performance money can buy, stay away from SCSI. SCSI was once the king of the video editing realm, but less-expensive drive technologies, notably ATA, have caught upand in some ways surpassedSCSI as a standard.

A final note on SCSI: if you plan to go pro, and you do want the best recording technology that money can buy, then you might want to consider purchasing a SCSI RAID. A RAID is a series of two or more hard drives operating in parallel to provide maximum data throughput speed. RAIDs are expensive, and they can sometimes be a tech support nightmare; but if you want the best performance you can get your hands on (to speed up render times, etc.), then consider purchasing a RAID.

We’ve covered a lot of ground on this topic, and in order to truly do it justice, we’d have to take up all of the pages in this magazine. Still, we hope you’ve gained some insight into the two major recording technologies that make video editing a reality. Good luck and happy shopping!