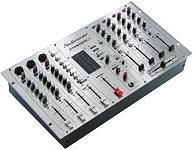 An audio mixer is an essential tool for recording high quality audio for multi-camera productions.

Who Needs a Mixer?

There are three primary categories of videographers who should consider using an audio mixer for video: those working with linear editing systems, those who shoot programs/events by switching live between multiple cameras, and those who need to mike multiple sound sources, even if shooting with a single camera.

To take control of capturing good sound from a multi-camera shoot, you need an audio mixer. Say you’re shooting a wedding with three cameras. You can switch the production live to tape by routing all of your cameras through a video mixer to a record VCR. But to get high quality audio, you’ll want to forget about those on-camera mikes. The only way to get good sound is to position a mike close to the subject. That means you’ll need an external mike or two – most likely wireless lavalieres for the minister and the groom. You might use a third mike to record the vocalist, and another to mike the piano. The only way to get the sound from all four sources onto your master tape is to run them through an audio mixer. The mixer will let you boost the output of the groom’s mike to pick up the brides whispered vows, and lower the level of the vocalist’s mike when she hits that screeching high note. Whether you shoot weddings, plays, seminars, talk shows, news programs, variety shows or sporting events, an audio mixer is an essential tool for recording high quality audio for multi-camera productions.

Linear editors have used audio mixers in post production for decades. Before the days of computer software with 99 tracks for layering sound, audio mixers were the only way to combine and balance music and narration with the original sound recorded with your footage. A linear editor might use an audio mixer to combine music from a cassette player with narration from a mike, and sound effects from a CD.

Anyone who has ever tried to mike a band with a single microphone will tell you that it just isn’t good enough. Even if you’ll be shooting that holiday concert at your church with a single camera, you’ll want to mike the violins separately from the horns and keep the woodwinds isolated from the percussionists. If you are shooting a panel discussion, you’ll need to mike each of the four guests and the moderator independently to get good sound.

Whether you work with one camera or three, whether you edit using your computer or a series of VCRs, anyone who shoots event videos can benefit from an audio mixer.

The Key is the Mix

Simply stated, audio mixers combine sound from two or more input devices and allow you to control the mix of those sounds. However, not all mixers are created equally. Some can do more than others, the key is to figure out your needs and find the mixer that will work for you and leave room to grow.


Many people enjoy the simplicity and portability of a camcorder-mounted mixer; it usually accepts one or two external mikes on standard 1/8-inch minijacks. A stereo minijack accepts the headphone output from a portable cassette deck or CD player so you can add music or sound effects as you shoot, eliminating a step from the editing process. Included on these small mixers are faders or knobs that allow you to adjust the level of all inputs. The mixer carries the combined audio to your camcorder’s external microphone jack by a 1/8-inch minijack cable in stereo or mono.

"Field" mixers are more flexible and more expensive. These units run on batteries and you can wear some models around your waist. They accept two or more mikes with large XLR connectors. On some, phantom power allows you to plug in high-quality condenser mikes that do not have a built-in battery.

Some mixers are designed to stay in one place. While most of them can be carried from place to place, they can be extremely heavy and difficult to move alone. These heavyweights often offer more inputs, more features, and therefore more control than their smaller, lighter counterparts.

Buttons and Knobs and Sliders Galore


Because of the abundance of knobs and dials on many mixers, initial operation can be intimidating. But it’s not as complicated as it may seem at first look. The handy thing about audio mixers is that the controls have the same function from channel to channel. So, what appears to be intimidating actually becomes second nature. Once you learn what the knobs do on one channel, all the rest function just as easily. Here is a quick run down of some of the most common components on audio mixers.