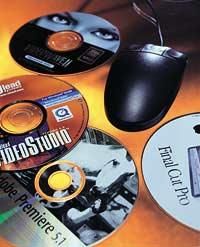 To edit video with a computer, you are going to need software. This software allows you, for the most part, to take clips, trim and move them as you need, add transitions and filters and play it back to tape. There are a lot of different editing software packages out there. Let us help you decide between them.

Most of the editing packages will require you to have an up-to-date computer. However, the price of a computer that is capable of handling the rigors of digital video keeps dropping. You can now find whole editing-capable systems starting between $1,200-$1,500. Of course, with an even larger investment, you can build an editing system that is professional level, and there are professional-level editing software available too.

Most of these editing-for-beginner’s programs can still do almost everything you’d want them to do. You might not be able to make a fancy commercial-like clip with lots of moving layers of video, titles and effects, but you can probably do the effects that you’d likely want or need for basic videos. Many of these programs use a storyboard interface, which uses a picon to identify each shot. You trim each shot to the length you want, and add transitions between the picons. This type of interface is often easier for new editors to understand, as it gives them a series of stills to base the selection and pacing of the shots in their video programs.

MGI Software makes VideoWave II ($99), a Windows program that supports two video tracks and six audio tracks, while having 52 transitions and 26 filters. Even though it costs less than $100, this program still requires at least a Pentium II 350MHz computer. It supports multiple layers of video, has a titler, can export an Edit Decision List (EDL) and log shots. It cannot batch capture however, which makes it unattractive for editors who have a lot of video to capture.

Another low-cost program is IMSI’s Lumiere ($80). Although this program doesn’t cost much, it can work with 99 audio and 99 video tracks. This Windows program also runs on older machines, with a minimum requirement of only a Pentium 90MHz with 32MB RAM.

If these editing programs just don’t have many of the features that you really want, you might look to one of the more-powerful titles.

When You Need More Oomph

When it comes to editing on a home computer, the software titles that most people think of are Adobe Premiere, Ulead MediaStudio Pro, and now, Apple Final Cut Pro. All three of these software titles have their proponents, and all three can do some amazing things with video. When you step up to one of these programs, you’ll find yourself with the editing power of a professional. You can add plug-ins for filters and transitions, do sophisticated titles, and usually have more control of your video than with the more-basic titles. These programs use a timeline interface, which shows the length of each shot. This may be more difficult for beginning editors to work with, but more experienced editors will love the ability to see the clip’s length.

Apple’s Final Cut Pro 1.2 ($999) is a QuickTime-based editing program that premiered last year. It offers advanced features such as batch capture, three-point editing and 99 audio and video tracks. It also has 60 pre-defined transitions and 75 filters. Final Cut Pro is for Macs only.

Premiere 5.1c ($579) is the latest version of the popular editing software from Adobe. Premiere can run on either Mac or Windows platforms. It now supports three-point editing, has batch capture, EDL export, and 99 audio and video tracks. It comes with 75 transitions, and 21 filters, and there are numerous plug-ins that allow you to have more of each. Premiere has been in the editing game for a long time now, and is known and loved by many editors.

Ulead MediaStudio Pro 6.0 ($495) is the latest version of the Windows platform competitor to Premiere. It supports 101 audio and video tracks, and comes with 116 pre-defined transitions and 67 filters. This program has its supporters who love its features. The latest version uses the native DV format and MPEG-2 to store video. Native DV support lets you keep your footage shot on a Mini DV or Digital 8 camcorder clean. MPEG-2 is the same compression that DVDs use. More and more editing programs are using it, first to save disk space, and second to allow easy transfer of video to DVD burners. It also has a new Smart Trim feature that deletes the parts of a clip that you don’t want so you can save disk space.

Sometimes though, you need still more power. When powerful editing programs like Final Cut Pro, Premiere and MediaStudio Pro can’t do what you need, it’s time to get into some serious video editing. Hopefully, you’re making money at it if you are using such powerful and expensive editing software.


When you really want to make a dazzling video clip, whether for a commercial, a music video, or whatever, sometimes you need to pull out all of the stops. When this happens, you need to go for some pro editing software.

Speed Razor 4.7 RT from in-sync ($2,000) is a real-time editing program. This means that you need to use it with hardware that can do all of those fancy transitions and filters without having to take the extra time to render. Speed Razor 4.7 RT can handle an unlimited number of audio and video tracks. It runs in Windows NT only, and you need the required hardware to make it all work right.

United Media makes On-Line Express DTV ($2,995). This Windows NT software supports eight tracks of audio and unlimited video tracks. You can also define and use an unlimited number of filters and transitions. It can handle multiple layers of video, export its Edit Decision List (EDL), do batch captures and includes a titler.

No matter what your skill level, if you are thinking about editing video, you’ll probably find yourself sitting in front of a computer rather than an edit controller and a stack of equipment. It is truly a new world in video editing. The way to get in is by using editing software. The trick is to find the software that best fits your needs. Happy shopping!