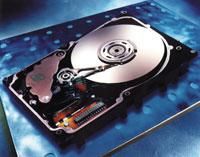 VCRs and hard drives are two of the video editors most basic tools. Why? Because they both are necessary to perform the functions of storing, copying and playing back video and audio during the editing process.

If youre looking to produce high-quality desktop video on your computer, then you need to consider one of the most important aspects of digital video post-production, hard drives. The hard drives found in home computers are typically not fast enough or large enough for the rigors of video production. Then again, disk performance has recently improved in this respect. Well focus our discussion on those hard drives that are at least 8GB in size and are capable of at least a 4MB per second data transfer rate. For video editing, we recommend drives with at least a 7200 RPM rotational speed.

There are three basic hard drive features that will affect your pocketbook as much as your performance: capacity, throughput and access time. One of the biggest constraints of digital video editing is disk storage space. Digital video consumes an enormous amount of data, so get the biggest drive you can. Ten minutes of S-VHS-quality video requires about a gigabyte of hard drive space.

Throughput is the speed that the hard drive can read and write information. It is measured by the data transfer rate. When youre capturing video, for example, you want to cut down on dropped frames and other problems; youre looking to get the fastest uninterrupted flow of data you can. For professional quality, you need a sustained throughput of at least 3MB per second. Manufacturers typically gauge their minimum and maximum data transfer rates by testing them under ideal conditions on high-powered systems. Its a safe bet that the data transfer rate you experience will be considerably less than what the manufacturer lists. To be on the safe side, reduce the listed data transfer rate by 75%, and then choose accordingly. (Note: specifications for SCSI drives tend to be much more reliable than those given for ATA drives. Also, some manufacturers are more accurate in their reports of hard drive speed than others.)

Although price does affect which hard drive is right for you, its important to keep price in perspective. Just a few years ago and for considerably more money, you got considerably less speed, size and reliability. Also, street prices vary widely, so be sure to shop around before you make your final purchase decision.

ATA drives are by far the most common type of hard drive. Only in the past few years have ATA drives gained the speed and reliability necessary for desktop video. Before that, desktop video editors had to rely solely on SCSI drives for video editing.

Maxtors DiamondMax Plus series of UltraDMA/66 hard drives offer 7,200 RPM speeds and storage capacities up to 40GB. Their 6800-series DiamondMax plus 13.6GB drive has an estimated retail price of around $250.

IBMs Deskstar 34GXP is a sizable 34.2GB, 7200 RPM drive that sells directly from the IBM Web site (www.ibm.com) for $365. It boasts a 9.0 microsecond seek time and a minimum sustained data transfer rate of 13MB/second.

The Realm of SCSI Drives

SCSI technology has also improved in recent years. Drives with 10,000 RPM rotational speed have become commonplace, and reliable data transfer rates have gone through the roof.

SCSI drives are more expensive than ATA drives, but they do have certain advantages. Unlike ATA, SCSI technology does not rely heavily on the computers CPU to perform data transfers. This means that the data transfer rates given by the manufacturers are more likely to resemble the speed youll actually achieve on your home computer. Also, SCSI allows true multi-tasking, which means that you can use multiple SCSI devices at the same time without greatly hindering performance. SCSI drives are also much easier to install and configure than ATA drives. They do have a drawback, however. They require that you the install an appropriate SCSI controller card, at least on PCs.

IBMs Ultrastar series of SCSI drives includes the Ultrastar 36XP ($899), a 36GB model with a spindle speed of 7,200 RPM. This drive boasts a 7.5 microsecond seek time and a 4MB buffer for increased performance.

Seagate, long a player in the SCSI hard drive market, offers its Cheetah 18LP in its online store (www.seagate.com) for $649. This drive has a 10,000 RPM spindle speed, a 5.2 microsecond access time and a storage capacity of 18GB. Also available from Seagate is the Barracuda 50 ($949), a 7,200 RPM drive with a gargantuan 50GB storage capacity and a 7.6 microsecond seek time.

If youre in the professional realm of desktop video editing, then youll probably want to look into a RAID (random array of inexpensive drives). RAIDs use multiple drives and parallel processing technology to deliver increased storage capacity as well as increased performance.

Medeas VideoRaid line of storage devices ranges from the VideoRaid 2/13 SCSI ($899), a 13GB model with a guaranteed sustained data transfer rate of 18MB/second, to the VideoRack 6/225 RT ($6,299), a 6-drive model with 225GB storage and a sustained data transfer rate of 55MB/second. For more detailed information on the full Medea line of RAID products, you can check out their Web site at www.medeacorp.com.

While there are plenty of fine, inexpensive VCRs available today, most do not have the video editor in mind. For the purposes of this article, well define a VCR that video editors would prefer as any model that has at least a flying erase head and a jog/shuttle controller. A flying erase head is essential for making glitch-free edits. The shuttle portion is necessary for moving quickly through large amounts of video. And the jog control makes it easy to locate the precise frame where youd like to begin or end an edit.

Sonys SLV-M91HF ($450) is a hi-fi VHS VCR with a jog-shuttle controller, flying erase heads and A/V insert editing. Its Flash Rewind feature rewinds a 120-minute VHS tape in about sixty seconds. That makes it handy for quickly locating edit points. The SLV-M91HF also has Sonys proprietary Laser Link wireless playback technology built-in. So if you have a Sony camcorder with the Laser Link feature, you dont even have to use cables to view or copy scenes from the camera to the VCR.

The most important development in the mainstream VCR market is the significant drop in price. Its now possible to purchase a VHS VCR with a few editing features for under $500. For example, the Mitsubishi HS-U795 is a VHS model with a jog/shuttle controller, preroll and dub switch.

Its good to keep in mind that these less expensive VCRs are oftentimes designed for watching rented videos so they have additional features like timer recording and VCR+.

S-VHS VCRs have also fallen in price over the past couple of years. JVC, the inventor of S-VHS, now offers its HR-57800, an S-VHS editing VCR with a flying erase head, jog/shuttle controller, built-in TBC (time base corrector) and A/V insert editing for only $599.

Along with most of the features found in the previous section, you may also find things like audio meters, which allow you to monitor audio levels. Its nice to be able to match sound from different sources. If you dont have a mixer, meters help.

Preroll comes on a number of the decks in this category, and it makes a difference too. With preroll, the deck backs up a predetermined distance (usually five or 10 seconds) from your edit point and rolls the tape before the edit starts. By the time it reaches the edit point, the tape will be running smoothly and the edit ends up looking a lot cleaner.

A deck in this category is JVCs HR-S9800U ($799). This S-VHS model has features that include a built-in TBC, TimeScan recording with Dynamic Drum technology (a feature that allows steady slow-motion and high-speed playback), a jog/shuttle controller and front-mounted A/V inputs.


The prices of models in this category may discourage some video hobbyists. But it is the special nature of these decks that separate the real editing tools from the toys. They come with most of the features we already explored. Made for professionals and usually in the Hi8, S-VHS or DV format, they are ruggedly designed to edit thousands of hours of high-quality video. Most of these decks can read and write time code, which is essential for accuracy in the linear world. Some of these decks have a built-in time base corrector for cleaning up the timing signals when making copies. Some even come with a built-in edit controller, which allows you to control both the player and recorder when editing. Also, look for insert/assemble editing modes, audio level meters, individual audio level controls for each stereo channel and edit control protocols.

Those looking for a Hi8 editing VCR in this price range should check out Sonys EVS-5000 ($1,899). RC Time Code, jog/shuttle and front-panel A/V inputs are included.


Before you go out and purchase an expensive VCR or hard drive, be sure to do plenty of shopping and research. Prices can vary widely for the same piece of equipment, and sometimes a deal thats too good to be true is just thattoo good to be true. Armed with the knowledge of what features and capabilities you need for your own video productionsas well as the information contained in Videomakers informative buyers guidesyoull be well on your way to making a purchase decision you wont regret.