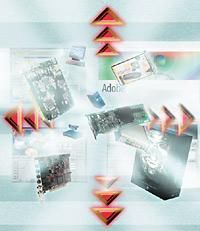 After looking, reading and thinking about it for so long, it’s finally time to make the step into nonlinear editing. And what a time it is, with lower prices and more powerful options than ever before.

Unfortunately, when it comes time to make that purchase, one quickly finds that it’s not quite as simple as it may at first seem. With so many different nonlinear editing products available, it’s sometimes difficult to separate the truly essential hardware and software from the non-essential widgets and doo-dads that make matters truly confusing for a first-time buyer.

Not to worry. We at Videomaker have boiled the market down into four essential product categories to get your shopping started on the right foot. This guide to sound cards, video capture cards, nonlinear editing software and ready-to-edit turnkey systems should get you on the right track when it’s time to open your wallet.

Before you rush out and buy a load of digital video hardware for your computer, consider how audio will fit into the picture. While many video capture cards include onboard audio capture, they don’t often include a way to create MIDI (Musical Instrument Digital Interface) music or sound effects for your productions. As a result, it’s sometimes in a digital video editor’s best interests to purchase a separate sound card for such applications.

Any discussion of PC sound cards must necessarily include Creative Labs, the company that practically invented the product category. At the head of the company’s current lineup of sound cards is the Sound Blaster Live! ($199), a PCI board that’s targeted at a wide range of computer audio enthusiasts, from audiophiles and home-theater buffs to content creators and digital musicians. The Sound Blaster Live! includes a SoundFont-based synthesizer that supports up to 192 voices of wavetable sound (upgradeable to 1024 voices with software updates) and up to 48 simultaneous MIDI channels. Also included is digital S/PDIF (Sony/Philips Digital Interconnect Format) audio input and output, so you can make crystal-clear copies of your sound tracks to and from digital audio equipment such as CD (Compact Disc), MD (Mini Disc), DAT (Digital Audio Tape) and others. In keeping with Creative Labs tradition, the included software bundle is huge; software of particular interest to video editors includes Sonic Foundry’s Sound Forge XP 4.0 (for sound effects), Cakewalk software’s Cakewalk Express Gold (for MIDI sequencing), and Mixman Technologies’ Mixman Studio (for simple creation of royalty-free music).

While audio is a crucial piece of the nonlinear video editor’s puzzle, it isn’t the central focus for most. For that, we must turn to the images themselves, and the means for recording them from tape onto a hard drive.


When planning to purchase a video capture card, you must consider two things: distribution and format. Let’s take a look at each of these considerations in turn as we cover some of the more popular products in the category.

If, on the other hand, you shot your video on DV or Digital8, you’ll probably want to take a close look at the IEEE 1394 (FireWire) cards currently available on the market. Representative of these is Digital Origin’s MotoDV ($399), a bare-bones solution for porting the digital audio and video information directly from the tape in a camcorder or VCR to the computer’s hard drive. With support for both Windows and the MacOS, 16:9 recording, time-lapse capture and Adobe Premiere LE, MotoDV has established itself as a popular choice for DV and Digital8 enthusiasts.

DV and Digital8 users should take a look at FAST’s DV Master ($2295), a video and audio capture solution that uses a hardware DV codec for video compression. This means that all of your analog footage–be it Hi8, S-VHS or BetaSP, is available for editing and storage on DV tape. Inputs include IEEE 1394 FireWire, S-Video and stereo audio; output options are identical, save for the inclusion of Component YUV output for mastering to Betacam formats.

Next, we’ll have a look at nonlinear editing software, the stuff that helps you blend all of your digital audio and video files into a final edited product.

A new entry into the nonlinear editing software market is Apple with Final Cut Pro ($999). Final Cut Pro is based on Apple’s QuickTime technology, and uses the FireWire port built-into all new Apple G3s for capture. Final Cut Pro uses a timeline interface, and has unlimited layers of video, audio, text and graphics.

Up until this point, we have been assuming that the reader intends to go through the sometimes frustrating, headache-inducing process of installing his or her own hardware and software. For those who would rather purchase a digital video editing workstation that operates flawlessly straight out of the shipping carton, there are a number of turnkey nonlinear editing systems available.


Just put in the key, turn it, and it works–that’s the automotive metaphor/operating principle behind the turnkey nonlinear video editing system (though most do not in fact have anything like a key to worry about). In its purest form, a turnkey nonlinear editing system is a pre-configured computer that includes all of the software and hardware you need to get started editing right away.

DV and Digital8 users may want to take a look at Sony’s VAIO Digital Studio PCV-R536DS ($1299), a complete multimedia computer that includes i.LINK (IEEE 1394) digital I/O, Adobe Premiere LE and an 13GB hard drive. Sony’s own DVGate Motion software provides a simple yet workable solution for input and output of batches of clips from a DV or Digital8 camcorder equipped with a i.LINK jack. If you don’t want a full-blown computer for video editing, there is still a place for you in the nonlinear editing world. Some turnkey nonlinear editing systems are not computers at all, but stand-alone video editing appliances that are simpler still to set up and configure.

Draco Systems’ Casablanca 040 ($3995) was the first of a new and exciting field of digital video editing appliances. Looking more like a VCR than a nonlinear editor, the Casablanca provides a simple storyboard-based proprietary editing interface and a number of options for upgrading the built-in titler, expanding the unit’s graphics capabilities and even adding IEEE 1394 FireWire input and output. Often the choice of non-video-professionals who nonetheless have a need to produce video, the Casablanca offers simplicity in both setup and in the editing process itself.


When preparing to shop for a nonlinear editing solution that fits your budget and needs, be sure to shop around plenty before you make your final decision. In the end, it comes down to a matter of personal issues–PC vs. Mac, timeline vs. storyboard, turnkey vs. do-it-yourself–that vary based on the background of the purchaser. So whether you’re into personal streaming video for your Web page or you plan to open your own video editing business for local events and commercials, be sure to get opinions from people you know who have used the software. Better yet, find a way to try the products before you purchase them. That way, you’ll be sure to know exactly what you’re getting yourself into before you lay out your hard-earned cash.