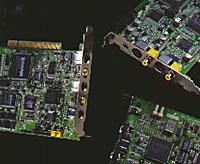 Video capture boards allow you to convert an analog, tape-based video signal to a digital format that you can view and edit from your computer. If you’re interested in creating streaming video for the Internet, or setting up a nonlinear editing workstation from scratch, then a video capture board is the place to start.

The good news is that manufacturers have made getting started much easier than it was even a year ago. Beginner boards have become affordable and easy to set up. But which video capture board should you choose from the dozens on the market? To help you sort out the different types, we’ve arranged the topic into four categories of capture boards according to their capabilities. Before we delve into the boards themselves, let’s talk about some of the terms and phrases you’re likely to encounter along the way.

A video digitizer–the most common type of video capture board–converts an analog video signal into a digital signal for storage on your computer’s hard drive. The analog signal must be sampled and converted to a digital approximation of the original recording. Even a DV recording–which is already in digital form on the tape–requires a capture card to transfer the digital information from tape to disk.

As the board captures the video, it must compress it using a compression/decompression scheme (or codec) in order to bring the data rate down to level that your computer can handle. Available codecs include MJPEG, MPEG and DV.

DV, a tape-based digital format, is a special case, because it records digital audio and video directly onto the video cassette. This means that the audio/visual information stored on DV tape can go straight to your computer with the help of a special cable and connector called FireWire or i.LINK. The DV signal is already compressed via the DV codec.

Some video capture cards include TV tuners, which allow the user to view or capture television broadcasts from an antenna or cable TV service. While these cards weren’t designed for use as serious video editing solutions, they can be useful for low-resolution capture for multimedia projects.

If you use broadcast footage in your home videos (for non-commercial use) you will probably not have any legal problems. But be forewarned: while the temptation to use captured television programs in your video productions might be great, in many instances using broadcast footage in this way can constitute a violation of copyright laws.

The most important characteristics to look for in a video capture device are resolution (number of horizontal and vertical pixels) and bit depth (the amount of color information assigned to each pixel). The minimum bit depth you should consider for video is 24-bit. For maximum playback quality when transferring your video back to tape, be sure to get a board that offers at least 640×480 resolution. A capture card’s speed (data rate) is also important, but it’s important to remember that capture performance is also dependent on the speed of the computer’s CPU and hard drive.

Because full-motion video consists of 30 frames per second (fps), and each frame consists of two interlaced fields, a high-quality image requires a board that’s capable of capturing video at 60 fields per second.

It’s virtually impossible to purchase a consumer-level video digitizer now that doesn’t include a bundle of extras. These can include audio capture capability, nonlinear editing software, image enhancement tools and streaming video encoding tools. With the wide range of capabilities, options and price points for video capture cards, any videographer should be able to find the right combination for his or her needs.


For multimedia enthusiasts who only want to move their video around on CD-ROM or the Internet via streaming video, digitizers that capture video at less than full-screen are perfectly adequate. Look for Web or CD publishing software as a bonus. And don’t forget that you’ll often need to purchase a separate sound card if the video card doesn’t capture audio.

Broadway Pro 2.5 ($995) is Data Translation’s Broadway Beginner all grown up. Use it to get real-time MPEG-1 compression and support for Real Networks’ RealVideo Internet streaming format. For added power, Data Translation throws in a two-stream VDOLive On-Demand streaming video server for Windows NT and 95, the latest version of Ulead Systems’ MediaStudio VE video editing software, and stock video and audio media clips. Capture resolution for the Broadway Pro tops out at 352×240.

AITech’s WaveWatcher Net-TV 98 is a TV tuner and capture card that is Microsoft WebTV compatible. WaveWatcher boasts the latest in enhanced broadcast TV viewing capabilities, and features full-motion 30fps capture up to 640×480 resolution at 16-, 24- or 32-bit RGB color.

Videonics offers a parallel-port MPEG encoder, the Python ($349), that allows you to easily place streaming video on your Web page, videoconference live over the Internet, add video to PC-based multimedia presentations, and e-mail videos to family and friends. It captures video at 352×240 resolution at 29.97 fps. Python plugs into your computer’s parallel printer port and features a pass-through connector for your printer, so you can leave both Python and the printer plugged in. It’s desktop or notebook PC-compatible (Windows 95) and includes Microsoft NetMeeting, Xing MPEG software, Kai’s PhotoSoap SE, and Astound Web publishing software.


If your goal is to produce video that’s destined for videotape output, you’ll need to spend a bit more for a more capable board. Full-motion, 60-field-per-second video is a must in this category, as is 24-bit color. While the cards in this category were designed for output to tape, not all of them are designed for top-notch professional output. They’re perfectly acceptable for many hobbyists, but their slightly lower resolution and noisy output are not quite good enough for professional video work.

Pinnacle’s Studio DC10 Plus ($229) is a good example of this kind of capture board. Offering 640×480 resolution and S-video input and output, the DC10 is a good entry-level board for those who would like to upgrade to nonlinear editing without spending a huge amount of money up front.

Also geared toward the beginning nonlinear editor is Iomega’s Buz ($199), a combination video capture and SCSI controller on a single PCI card. The PC version of Buz comes with MGI’s VideoWave software, while the G3 Macintosh version comes with Adobe Premiere 4.2 LE. The included SCSI controller is useful for installing a SCSI capture drive along with Buz; naturally, Iomega recommends their Jaz family of removable SCSI drives for this purpose.


Boards in this category are characterized by full-motion, full-screen, 640×480 video capture, which is considered good enough for professional work. Many of them can be found in the edit bays of local commercial producers as well as in the home of weekend videographers.

The AV Master from FAST Multimedia is a popular audio/video capture card in the low-end professional category. Video signals are compressed in real time at 60 fields per second with full 640×480 resolution using the Motion-JPEG codec. The integrated sound chip digitizes audio along with the video, so a separate sound card is not necessary. For nonlinear editing, the AV Master comes bundled with MediaStudio Pro software from Ulead.

The miroMOTION DC30 for Power Macintosh, also from Pinnacle, offers capture rates up to 3.5 MB/second and resolution up to 720×480 pixels. Like its PC-based cousin, the miroMOTION DC30 utilizes Motion-JPEG to capture video at up to 60 fields per second with 24-bit color depth. Audio capture is also included on this board.


DV capture boards use FireWire technology for all-digital video editing. DV/FireWire editing has the advantage of using just one cable for transferring video, sound and device control signals. If you have a FireWire (or i.LINK) jack on your camcorder, you might seriously consider investing in one of these capture boards.

DPS’s Spark Plus ($899) is a DV editing solution for Windows NT and Windows 95/98 computers that combines a SCSI host adapter and FireWire capabilities on one card, freeing up PCI slots for other uses.

Digital Origin (formerly Radius) offers the MotoDV Studio 2.0 ($899) that can capture DV clips from within Adobe Premiere. MotoDV is compatible with Windows 95, 98 and NT 4.0 and includes QuickTime 3 for Windows, Microsoft DirectX and Adobe Premiere 5.1.

DVRex-M1 from Canopus is available with Ulead’s MediaStudio Pro editing software for $2,795, or without for $2,495. Both versions include Rex Edit software to control the DV camcorder, batch capture video and audio and add new audio tracks. DVRex-M1 also features the Sony DVBK-1 hardware codec, and a breakout box with all relevant connectors.

Canopus also offers the DVRaptor which features the Canopus software DV codec. The PCI card with bus mastering provides seamless video capture and output, SmartPlay for seamless playback from the timeline, and the full version of Media Studio Pro 5.0.

When compared to the digitizers that were available just five years ago, the wealth of choices videographers have now is very fortunate. These low-cost multi-talented tools can turn anyone with a computer and a camcorder into a video editor. Capture on!