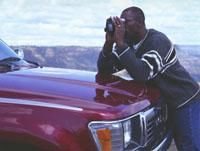 Not so long ago, the first sport utility vehicles entered the automobile market. With luxury comfort, sleek design and four-wheel drive power, they were an instant hit with consumers.

Today, sport utilities are everywhere, and they continue to grow in popularity. The interesting thing is that while a percentage of sport utility owners use their vehicles off-road, studies show that most of them are never driven off the pavement. Many are never even switched into four-wheel drive. The truth is that most people who buy sport utilities don’t buy them because they need the stiff suspensions or the 4-wheel drive capabilities. They buy them because they like them. These vehicles carry with them a certain status. While most sport utility owners will never use these vehicles to their full potential, just knowing that they can is enough to make them happy.

We could say the same things about DV camcorders. Only a small percentage of DV camcorder owners are currently using FireWire-equipped equipment to do their editing. This is where the real "power" of the DV format comes into play. Yet an overwhelming number of people are saying that DV will be the next format of camcorder they purchase.

It’s clear from sales of DV camcorders reported by the Consumer Electronics Manufacturers Association that in the minds of consumers, DV is the new format of choice. And it doesn’t seem to matter if the shooter is editing
digitally or not. Like sport utility vehicles, people just like them. In this story we’ll look at some of the things that make DV such a popular format.

To the casual shooter, one of Mini DV’s most attractive attributes is its small size. Because DV tape itself is so small (with cassettes measuring just 2 1/2 by 1 3/4-inches), Mini DV camcorders can be built on a small scale. Gone are the days of lugging around a huge-bodied camcorder that was about as inconspicuous as a chainsaw. Most DV camcorders are no larger than point-and-shoot still cameras. Models like the JVC GR-DV3 ($1,599) and the Canon ZR ($1,999) can slip easily into a pocket. Their compact size makes them easier to carry, and therefore, more convenient and more likely to be taken out and used on vacations and at events where larger camcorders would be a hassle. They are also light, so they don’t add much weight when they are tucked away in a backpack, briefcase or travel bag.


Many consumers are attracted to DV for its relative simplicity of use. As camcorders have developed through the years, manufacturers have discovered new ways to make them easier to operate. DV camcorders offer the latest and greatest in the area of user operation. All but a few of this year’s models feature color LCD displays. These TV-screen-style viewfinders allow the user to videotape without having one eye pressed against a tiny eyecup. These viewfinders range from two to four inches in size. The JVC GR-DVL9000 ($2,800), the JVC Pro GR-DLSIU ($2,850) and the Sharp VL-PD1U ($1,995) all offer large 4-inch displays. Several models allow the user the option of using a more traditional eyecup style viewfinder as well.

This year, Sharp has taken ease of operation a step further, having introduced two DV models that feature touch-screen operation. The VL-PD1U and VL-RD1U (both list for $1,995). These cameras allow the user to cycle through a series of menus to control such things as focus, digital effects, digital zoom and more by touching the camcorder’s LCD display. It’s a slick and very user-friendly system that should grow in popularity.


Image quality surely ranks at the top of the list of reasons why shoppers prefer DV. The DV format has the capacity to record images at higher resolutions than any other consumer format. Some DV camcorders are capable of capturing images at over 500 lines of horizontal resolution. Its closest competitor, Hi8, maxes out at around 400 lines of resolution. Can the naked eye really see a difference between raw footage shot on Hi8, S-VHS or DV? The biggest difference will be seen in the reproduction of richly saturated colors. In most cases, however, the average weekend shooter will probably not notice the difference. The quality of the images you put on tape depends more on lighting conditions than on the maximum resolution capacities of a camcorder. To the non-editing, casual shooter, then, the idea that a DV camcorder will make his always crummy-looking videos look like broadcast television is a misconception.

The real value of this increased image quality is seen when making copies that span multiple generations (that is, making copies of copies of copies). If you edit deck-to-deck (in a linear fashion), DV source material will yield an advantage. Because the quality of any analog video signal decreases each time a copy is made, the higher the resolution of the camera footage, the higher the quality will be (comparatively speaking) on the edit master. Even if the difference is only slight, it may be worthwhile. Like Olympic bobsledders, whose race times are separated by mere hundredths of a second, choosy videographers may opt for camcorders that have the potential to produce the highest quality possible–even if the average viewer won’t see the difference.


Only a few users of DV camcorders currently realize one of the most valuable aspects of the DV format. To appreciate DV’s ability to virtually eliminate generation loss, one must edit either with a nonlinear editing system or equipped with DV capture capabilities or a linear system that uses two DV camcorders (or a combination of DV camcorder and DV deck) and an SEG equipped with IEEE ports.

DV capture is the ability to transfer video digitally from a camcorder to a hard drive for editing. The IEEE 1394 cable and connector (also known as FireWire or i.LINK) is the bridge between the two. This cable carries video from a DV camcorder to the hard drive of a nonlinear editing system and (if desired) back again.

You can use DV for linear editing also (Videonics will soon release a DV version of their popular stand-alone SEG, the MXPro), but you’ll only reap the benefits of the digital signal if you make all of your video connections with a FireWire cable. Thus, two DV camcorders connected via FireWire–or a DV camcorder and a DV VCR–will have the ability to comprise a complete digital linear edit suite.

This digital transfer provides an image that can theoretically be transferred, manipulated and copied hundreds of times without suffering the loss of image quality to the degree that is inherent to any other video format. It is this ability that makes the video editor’s heart palpitate.

But beware! As recently as a year ago, there were at least eight different DV models on the market that were not equipped with FireWire. While most of those models have been discontinued in favor of upgraded versions that do have the all-important port, there are still some DV camcorders available that are not equipped with a FireWire connector. This year, our buyer’s guide shows three models that don’t feature FireWire. Interestingly enough, one of them is also one of the most expensive: the Panasonic BDS AG EZ1U ($4,295). Because it is designed primarily for professional use, perhaps the manufacturer expects the user will have a separate Mini DV VCR for playback and digital transfer. The other two are JVC models (the GR-DVA1 and the GR-DVF10). These models cost hundreds of dollars less than any other DV camcorder on the market and are aimed at the budget-minded DV consumer. If you plan to eventually try your hand at nonlinear editing, however, select a camcorder that is FireWire ready. Even if you aren’t currently editing digitally, it might be wise to select a model that will allow you that option in the future. After all, buying a DV camcorder without a FireWire port is like buying a 2-wheel drive sport utility vehicle. People buy them, but they just aren’t as useful.


In recent years, high-end video producers have made DV the format of choice, with DV camcorders providing professional quality controls and superior image quality at a price that is reasonable when compared to professional camcorders. Professional producers prefer models like Sony’s DCR-VX1000 ($4,199), Panasonic’s AG-EZ1U ($4,295) and Canon’s XL1 ($4,699). These models are packed with professional-style manual controls and features, and 3-CCD imaging. Canon’s XL1 boasts an interchangeable lens and an optional shoulder mount with XLR mike inputs. These camcorders are top-of-the-line production tools, and the pros use them right along with their ultra-high-end Betacams.

In the realm of consumer video, DV is simply as good as it gets. Even national broadcasters are jumping on the DV bandwagon. In fact, if you watch carefully, you might just see DV being used to shoot segments of network TV shows. A careful eye will reveal the use of DV cams on animal safari shows for Animal Planet and on Fox’s Wild Things. You might catch the hosts of the Popular Mechanics for Kids show taking one for a roller coaster ride or witness Dan Rather or Sam Donaldson taking one behind the walls of a maximum security prison for an exclusive interview.


But wait there’s more. The DV format guarantees the presence of timecode, the frame numbering system that provides editing accuracy to the 30th of a second. DV tape includes ITI (Insert Track Information) which carries imbedded information for making precise inserts. DV also has the potential to auto-log clips (marking ins and outs and creating a digital still-frame to represent each clip) as you shoot.

DV camcorders put broadcast quality imaging in a pocket-sized package and give the hobbyist the power to create video on par with broadcast television. Not only do DV camcorders record footage at unsurpassed quality, but video editors can transfer the footage into nonlinear editing rigs or edit through FireWire-equipped linear systems (even controlling play and record functions through the IEEE connection) without any signal loss. The format boasts superior resolutions, and all but eliminates generation loss.

Do you need a digital camcorder for taping your vacation or family get-together? Not really. But then again, you probably don’t need four-wheel drive to run to the grocery store, either.