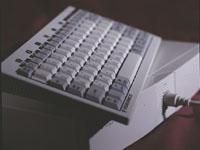 The only limit to the originality of your titles is your imagination. You can use a variety of household items in place of a character generator (See Titling for Under a Buck in the August 1998 issue of Videomaker), but when you are out of fresh ideas for using children’s blocks, wedding invitations and other found items, you might find yourself on the market for some titling gear.

Having a few titling tools on hand can help you unleash your imagination, and get your vision across to the viewers of your video. Here is a roundup of hardware and software to bring text to your video. Use the accompanying buyer’s guide grid to compare and contrast the available options, and make the titling decision that is right for your edit suite.

Titlers come in two basic varieties: stand-alone and computer-based. The lowest-priced stand-alone character generator is the Sima ColorWriter 2 (reviewed in the July 1998 issue of Videomaker). The ColorWriter 2 lets you choose between three fonts, 24 font sizes and eight background colors. It allows you to fade your titles in and out, superimpose them, or put them in a box. It also allows you to make your titles crawl or roll at three different speeds, all for under $200. If you want a basic no-frills stand-alone titler, the ColorWriter is your least-expensive choice.

An inexpensive stand-alone character generator is great if you run a linear editing suite, but if you are already using a nonlinear editing system (and you’re not satisfied with its built-in titling capabilities), or if your computer has a way to output and/or overlay NTSC graphics, then a computer-based titling software package would probably be the best way for you to go.

If you only need a few titles, without fancy rolling or crawling, you could use a program like Microsoft Paint, which is included with all versions of Windows. You also might consider using Microsoft PowerPoint, which is included in MS Office, or Adobe PhotoShop, which is a popular photo and image editor, to make your titles. Once made, it’s a relatively simple matter to import them into your nonlinear editing interface or record them onto video.

Keeping it Under a Grand


As you can see, the market is pretty limited when it comes to sub-$200 titling equipment. If you are willing to pony up a little more cash for your titling gear, you get to the better stand-alone models, and the titling software that comes with genlock and overlay hardware.

The first sub-$1,000 stand-alone titler is the $399 Videonics PTM-1 Personal TitleMaker. This stand-alone box lets you pick from seven fonts, four font sizes and millions of different font colors. It supports basic effects such as drop shadow, transparency, outline, underline and superimposition. It also allows you to scroll and crawl the video at eight different speeds.

Moving up the price ladder is the DataVideo SE-300pro Digital Video Illustrator. This $699 stand-alone titler supports 24 built-in fonts (but can use TrueType and PostScript fonts too), three font sizes, and 256 font colors. It does outline, underline, boxes, drop shadow, transparency and superimposition. It has three scroll and crawl speeds, supports fade-in and out, performs motion path animation, and has a genlock.

If you want to use your computer for titling, InnoVision Technology makes a variety of character generator software packages, and many of them are custom tailored to work with different nonlinear editing software packages.

First is the standard version of Alpha CG. This $399 titling package requires a nonlinear editor or genlock device to work properly. It includes 500+ fonts in 999 sizes. It can run them at 16,700,000 colors. It also supports TrueType Fonts, but not PostScript. The standard version of Alpha CG also supports effects, such as outline, underline, box, drop shadow, transparency and superimposition. Motion path animation is available as an option.

Some of the better titling software packages come with an internal expansion card that has the genlock for the titler built-in. These combination hardware/software computer-based titlers provide videographers with the titling power usually reserved for professionals.

The first hardware/software computer-based combination we’ll cover is TV One’s DeltaScan GL/Movie Titler. This $495 titling hardware/software package supports Windows TrueType Fonts, in 10 sizes and 24 colors. It also can use PostScript Fonts. It supports 24 crawl and roll speeds, and every major effect including fade-in and out, genlock, superimposition, transparency, underline, outline, box, and drop shadow. The only thing the DeltaScan GL/Movie Titler doesn’t support is motion-path animation.

Also available is Video International’s $795 PC Titler. This titler supports nine fonts in two sizes and 256,000 colors. It can do outlines, underlines, transparency and superimposition. The PC Titler also supports three roll and eight crawl speeds. It does genlock, and can use motion path animation. There is also an option that seems targeted at local cable channels to automatically display updated local weather with wind speed, direction and chill factor.

Video International also makes the TEXTOOL for $895. This titler has nine fonts in two sizes with 256,000 colors. It also does outline, underline, box, transparency, superimposition, genlock and motion path animation. It gives you three roll speeds and eight crawl speeds. A couple of things that you won’t find on the TEXTOOL are drop shadow, fade-in and out and TrueType and PostScript Fonts, because they aren’t supported.


Now that we’ve covered some of the possibilities in the low- and mid-cost titling realm, let’s see what’s available for a bit more money.

First is a stand-alone Videonics product, the PowerScript 1000. This $3,000 character generator has 35 built-in fonts, with an unlimited expansion capability. It can run fonts at any size, and in any solid color. The PowerScript 1000 also can use PostScript Fonts, but not TrueType Fonts. It handles all of the major effects, such as transparency, superimposition, 15 crawl and roll speeds, drop shadow, box, underline and outline.

An interesting MS-DOS computer-based titler (it will run on Windows machines too, except for computers with the Windows NT operating system) is Knox Video’s PC40. This $1,295 titler has eight fonts in two sizes for each font, and it supports 32 colors. It doesn’t use TrueType or PostScript fonts, but it does outline, underline, transparency and superimposition. It has nine scroll and crawl speeds, and genlock.

Compix Media makes Video CG Pro, a $1,850 computer-based Windows 3.1 and 95 titling program with an expansion card. This titling package lets you use all TrueType fonts and sizes in 32,768 colors. It supports outline, underline, boxes, drop shadow, transparency, superimposition, eight scroll and crawl speeds, fade-in and out and genlock.

These seemingly expensive character generators are just the tip of the iceberg when it comes to titlers. Some of the professional models have more features available, but these titlers can cost as much as a new sports car.

For instance, Chyron sells their Infinit titler for the low, low price of $64,000. For this small sum, your titler supports unlimited fonts, font sizes ranging from 0 to 900 scan lines, 16,700,000 colors, and every effect known to titlers. This is a great titler if you have $64,000 laying around the house.


Titlers range from simple four-color affairs that can barely generate a blocky piece of text, to expensive computer-controlled devices that can turn a PC into a text-based cable TV station. There are also a variety of newer 3D titling software packages that offer advanced features like anti-aliasing, which will fill in the "jaggies" that are often left on the rounded edged of computer-created text. Use the buyer’s guide grid to find the right titling software for your needs, and get those words onto the screen.