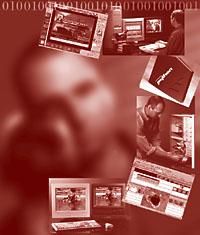 Arguably, the shortest path from the videos you compose in your imagination to the finished tapes you distribute to your audience is through the use of desktop video equipment (DTV for short). DTV is the melding of two formerly separate worlds: the world of video production and computer-based imaging. From the creation of impressive-looking titles with exactly the fonts and animation you want, to creating and editing your video directly off the hard drive, to making your own purely imaginary 3D worlds from scratch, desktop video is truly the cutting edge when it comes to realizing your dreams on videotape.

What follows is a survey of eleven different product types, all of which involve the use of a computer in video production in one way or another. From simple titling and storyboarding programs to full-blown nonlinear editing workstations, the products in the pages ahead range widely in price and performance. All have one thing in common: they harness the power of the computer for video, which can be a great thing, even if you only have $200 to spend and a simple home camcorder. To help you make a purchase decision we’ve also included a buyer’s guide to eleven DTV product types.

The category of pre-production software covers a wide range of product types, including tools to help with scriptwriting, storyboarding, scheduling and logging your productions.

Scriptwriting packages help primarily with the formatting of your script. Most home videographers don’t have much need for a strict two-column video format, but for those who would like to submit their scripts to television and film studios, attention to detail is a must. Storyboard software, on the other hand, is useful for anyone who wants a means of visualizing his videos before they’re shot.

Logging software is perhaps the most time-saving product of the category, because it allows you to identify the name and location of each scene on a videotape-no more fast-forwarding through countless tapes to find the one scene you’re looking for.

Whatever form they might take, these software titles have one thing in common: they make the various tasks involved in planning for your video shoots much easier.

Words on the Screen

One of the easiest ways to get involved in desktop video is through the use of titling software. With a computer, you can easily create a title sequence that will blow the socks off anything a typical stand-alone titler can create.

Software alone, however, will not do the trick when it comes time to put your titles onto videotape. Unless you plan on shooting the computer screen with your camcorder (not recommended, due to the rolling black bar that appears on the computer monitor when you do so), you’ll need an encoder to get the graphics from your computer screen to your videotape. If you want to superimpose computer-generated titles over moving video footage, you’ll need to think about getting a genlock device instead.

The job of the encoder (sometimes referred to as a scan converter) is to transform the output of a computer monitor into a form that’s readable by a video monitor and recordable onto videotape. The name "encoder" comes from the task that it performs: it encodes computer graphic information into NTSC, the video standard that we use in the United States.

Encoders are available at many levels of price and quality. Some of the cheaper units will sometimes cause the image to flicker uncontrollably; others will leave a black box around the graphic (called underscanning). To avoid these problems, look for units that have the flicker-free and overscan boxes checked on the buyer’s guide grid.

The next time you need an informational graphic in your video, consider composing it on your computer and using an encoder to record it onto tape. This will not only make a better-looking graphic; it’ll make the whole process easier in the bargain.

Genlocks and Overlay Boards
Genlocking is the process
of synchronizing two independent video sources. Any time you mix
two sources of video together, you need to genlock their signals.
In a computer-based environment, this is usually the process of
synchronizing NTSC-encoded graphics from the computer with an
existing video signal-to overlay titles on tape, for example,
or to superimpose a weatherman over a computer-designed weathermap.
(An overlay board, by the way, does the same thing).

Genlock devices come in two
basic flavors: internal and external. Internal genlock boards
plug into an available slot in the computer’s motherboard; external
genlocks, on the other hand, usually plug into the computer’s
parallel or serial port. Regardless of how it’s attached, the
basic function is the same: to superimpose titles and graphics
over a video image from a camera or VCR.

Some important items to look for in a video capture board are maximum capture resolution (640×480 is the minimum necessary for high quality full-screen output to videotape), 60-field-per-second capture, and maximum bit depth (24-bit being the standard for high quality color reproduction). Another important concern is the presence of audio on the card; without it, you’ll need a separate audio digitizer to capture the sound along with the picture. Some videographers prefer to use a separate audio card instead of the built-in variety because most separate audio cards offer much more versatility.

Nonlinear editing gets its name from the way you access video information that’s recorded on a hard drive. Unlike tape-which is linear, and requires fast-forwarding and rewinding to specific spots in the program-a hard drive offers instant access to any specific point in the video file, which saves a great deal of time in the editing process.

Nonlinear editors in our buyer’s guide fall into two broad categories. Some are software packages, like Adobe Premiere and Ulead MediaStudio, which provide the brains of a nonlinear editing computer; video capture cards, hard drives, etc. are not included. Others are turnkey systems, like the Media 100 and the Newtek Video Toaster Flyer, which include everything you need to begin editing right away–including the computer, in most cases. One innovative product, the Draco Casablanca, even operates on its own without a computer.

For many computer owners, the audio card exists only for playing games, or perhaps for the occasional educational CD-ROM title. Not so with the digital videographer: with a sound card, video enthusiasts have access to more sound effects, music creation software, audio manipulation tools and virtual electronic instruments than they can shake a stick at.

For example: let’s suppose you wanted to make your on-screen monster roar like the dickens. With an audio digitizer and a typical audio manipulation package (Sonic Foundry’s Sound Forge, for example), you can take a recording of your cat’s meow, slow it down to about one-fourth speed, then add some reverberation, echo and a few other effects for good measure. In no time, you’ll have a monster howl that would give Boris Karloff nightmares.

Special Effects Software
Most of the software packages
listed in this grid are examples of transition software, which
provide dozens of new ways to link two clips together in a nonlinear
editing environment. Because they usually plug right into your
nonlinear editing software, they require very little time to master.

Some types of special effects
software are not transition-based. These include Adobe’s After
Effects, which has become an industry-standard means of putting
together existing materials (such as titles, video clips, 3D animations,
etc.) into a single, cohesive video clip. With this type of program,
you can make very clean composites, adjust colors, add explosions,
erase elements of the frame and replace them with other elements,
move objects around in the frame, etc.

In most cases, effects are
not necessary; in fact, they can sometimes detract from the story
you’re trying to tell. For those times when an effect is called
for, these products will give you the tools you need to make some
really impressive visuals.

Get Animated
Animation is one of the most impressive and visible uses for a computer in video production. Computer animation in video has become so prevalent, in fact, that it’s nearly impossible to find any television show or Hollywood movie that doesn’t make use of computer animation at some point in the program.

While 2D programs offer plenty to get your titles and graphics moving, the 3D animation programs represent one of the highest achievements in today’s graphics software market. The addition of another vector (depth) makes for some stunning visual effects.

Even if you don’t use it to create the next Jurassic Park, an animation program can help you create titles and graphics that will really hold your viewers’ interest.

Computer-based Control
Using a computer to edit your videos doesn’t necessarily mean you have to throw away your old analog editing equipment. In fact, a computer-based edit controller might be just the thing to help you get the most out of your existing analog gear.

Like their stand-alone cousins, computer-based edit controllers provide a central system for the control of VCRs, SEGs, titlers, camcorders and other editing equipment. Because they usually don’t digitize your video, they require very little in the way of processing power, RAM or hard drive space. This means that it’s possible to run many computer-based edit controllers on an older computer; some will even run perfectly on a 386.

Some computer-based edit controllers offer computer-based titling and audio manipulation capabilities to go along with the basic device-control services they provide; these are among the better values in today’s desktop video market.

Hybridization
Having valiantly attempted to place each desktop video product into its own specific category,
we discovered that there is a certain type of digital video product
that defies classification. One of the earliest desktop video
systems fits into this category: the Newtek Video Toaster, which
includes special effects transitions, 3D animation, titling and
several other features in a single product.

Some of the items in this category are hybrid editors–combinations of both computer-based linear edit control and nonlinear editing in a single package. This type of system offers the power of flexibility; you can decide which type of editing suits a given project best, or use both types within a single project if you prefer.

On the other end of the price scale, there are products like the Pinnacle Video Director Studio 200, an inexpensive bundle of software and hardware that includes features of a genlock, titler, edit controller, special effects generator and still-image capture device, all rolled into one.

Whether you end up buying
a genlock board and some titling software, a video digitizer,
or a full-blown hybrid editing system, one thing is certain: once
you get started using your computer in video editing, you’ll wonder
how you ever got along without it.