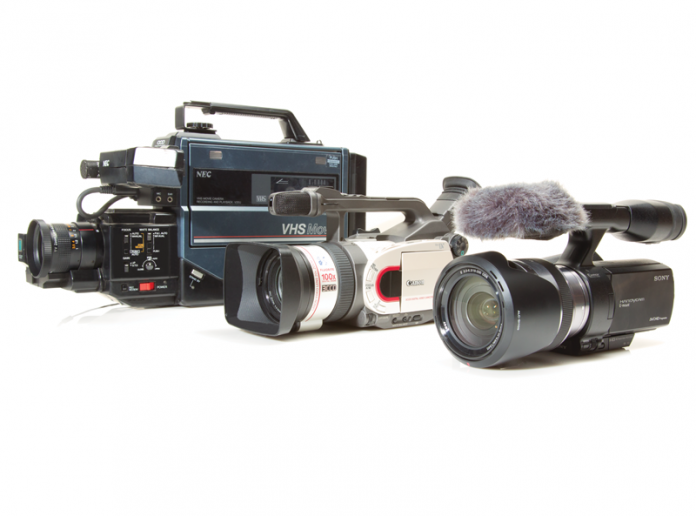 Think back, long before the dawn of smartphones with cameras, DSLRs, point-and-shoots and mirrorless cameras, and remember a time when affordable home video production had but one option: the noble camcorder. These days, lots of devices can shoot video, but unlike the aforementioned options, a camcorder is one device with video capture as the primary function. Some camcorders might shoot stills, others could have simple editing features, but with a camcorder, job number one is shooting video.

Modern camcorders have gotten smaller, with higher resolution and more features than ever, but they weren’t always so svelte.

Back before we were mounting action cameras to our heads, cameras were used primarily for feature films and broadcast, and the home user had few options for making their own masterpieces.

By 1965, however, the release of handheld Super 8 and 16mm film cameras freed up the enthusiast crowd to create motion pictures and play back their results by film projector. While still a true luxury item, the market grew relatively quickly to give burgeoning Deakins and de Bonts more options and formats to shoot in, but ease of use and elegance were lacking.

The big change came when broadcast had a need to make their out-of-studio setups totally portable, and some major manufacturers created videocassette based systems for the broadcasting teams. Prior to this system, broadcasters had to use remote recording systems to capture the footage they shot.

Some camcorders might shoot stills, others could have simple editing features, but with a camcorder, job number one is shooting video.

Betamax and VHS-based camcorders came trundling along in 1975 and 1976 respectively and quickly went to work fighting for an audience. They were relatively easy to use, and, if you had a sturdy shoulder and back, quite portable. Unfortunately, the early camcorders were really expensive and it took a number of years — and a plummeting entry price — for them to really catch on.

These two popular home video formats did battle in the camera stores as well as on the video rental shelves. Both formats, with their large, over-the-shoulder design could produce nice stable footage. Eventually VHS won the war, with the format controlling 60 percent of the North American market by 1980, and Betamax faded out over the course of the ‘80s. While the consumer format died off, Beta still lives on in an updated broadcast version called Betacam.

The videocassette format progressed mostly, becoming smaller with more storage, evolving into the form of Hi 8, Mini DVD and ultimately in a variety of formats for the DV video standard.

DV, or Digital Video, is a standard introduced by a cooperating conglomerate of the the world’s leading video recording companies to help reduce the growing variations in digital formats. The DV format specifies a number of features to be standardized for digital video recorders.

During the 1990s and early 2000s, the camcorder industry also underwent the major shift from standard definition to high definition. Standard definition, which in North America refers to footage with 480 or fewer pixels in horizontal resolution, began to give way to interlaced footage 1080 pixels in width or progressive footage at 720 pixels in width. Storage methods, pixel aspect ratios and consistency across camera standards varied widely, but the trend continued to be toward bigger, better footage and high end specs trickling down to the consumer level.

Today we see the shift to higher resolution continuing with mainstream consumer cameras shooting up to 4K, which is, depending on the standard, either just less than or greater than 4,000 pixels in horizontal resolution.

Camcorders have certainly come a long way from the old film and cassette cameras. Along with higher resolution comes a few challenges, including the need for more storage, and cheaper storage. Today, camcorders rely on digital storage using memory cards and solid state drives to hold the large footage being shot. This shift to readily available and inexpensive storage has lowered the cost and simplified the workflow of modern cameras.

All of the cool factors going into the Hero over the years have made them wildly popular, and the action camera market has seen explosive growth as a result. This past March, the company went public and has a current valuation in the neighborhood of 3 billion dollars.

But GoPro isn't the only game in town for camcorders. All of the usual suspects (Sony, Canon, JVC, Panasonic) are still creating incredibly capable cameras for the consumer market. Powerful optical and digital zooming, vibrant color touchscreens, larger bodies housing great image stabilization and autofocus systems and space for external controls make traditional camcorders an excellent choice for many shooters.

These consumer camcorders are good enough for more than just home movies, too. Motion pictures such as “Paranormal Activity,” “[REC]” and “Cloverfield” were all shot on consumer or similarly-chipped prosumer camcorders. Additionally, hundreds of documentaries and independent films have been filmed on the same camcorders sold at Best Buy locations across the nation.

This is the magic of a camcorder. The simplicity of a device designed specifically to make shooting video easy means everybody from a documentary filmmaker to an 8-year-old child can focus entirely on what they're capturing. Less time composing shots and changing lenses makes for more time dreaming up a masterpiece.

Changing lenses isn't all bad. DSLRs and the latest wave of mirrorless cameras, while not specifically camcorders, all take advantage of the large photo sensor they're packed with to shoot video. This larger sensor can make for some brilliant image quality. They are a good and inexpensive option for video, though moving from a camcorder to an interchangeable lens camera will involve a learning curve. Learning to effectively manage a lens will take a bit of time, but can yield some really dramatic results.

If that doesn't sound like any fun, but a taste of camcorder fun is on the menu, current smartphones and tablets offer the ability to shoot decent quality video as well. Depending on the phone, features can vary widely. For example, Sony's Experia Z2 can shoot 4K video, and Nokia's high-end Lumias offer optical image stabilization that gives prosumer cameras a run for their money.

With various apps extending the functionality of the smartphone's integrated camera, smartphone filmmaking is taking off as well. But apps aren't the only way to up the smartphone video game — devices such as the iOgrapher take iPhones and iPads and extend their usability by adding mounts for lenses, microphones and tripods.

So do all of these types of cameras flooding the market spell the end for dedicated camcorders for consumers? Cheap options like entry level DSLRs and options we already carry around like our smartphones certainly mean that casual videography might be spread across a number of devices, but don't count out the trusty camcorder. GoPros are being suction-cupped to just about anything that moves, and handheld camcorders are still in great use around the world.

The beauty of camcorders are that they make shooting video fun and easy, not clouding the experience with fussy settings, adjusting for light or finding focus with an interchangeable lens camera. The future for camcorders looks pretty bright, too. The market is still growing, particularly in the area of action cameras, and the ability to dream up and shoot independent creations grows right along with it.

While there are myriad options to choose from when it comes to consumer cameras, the risk of making a bad choice gets smaller and smaller. The most important part is to get a camera and get out and shoot!

Take Shooting with a Consumer Camcorder to the Next Level

Consumer camcorders are great for shooting video. Many include options for stabilizing the picture, continuous autofocus, automatic exposure settings, beautiful bright screens for monitoring a shot, and many other great options. Even with all of those tools available, there are some conditions which can leave a camcorder wanting. Fortunately, there are tools to complement a camcorder’s drawbacks and take them to the next level. Here are a few popular choices:

With all of these add-ons there are additional costs, and these cameras are often used in shoots with no budgets, like home movies and family event videos. Look at what the pros use and take note of what factors make them good options. Weight, light output, stability, multiple wireless channels and a lot of other factors make for great gear, but there are many inexpensive options which may not have been intended for video originally. Work lights can take the place of pro lights in some cases. Music stores may have less expensive microphone options than the local video store, and tripods come in shapes and prices for all budgets. Cameras can balance in a lot of places, depending on how risk averse the operator is.

Pro gear is usually the best, and will typically last longer and cost less over the long haul than replacing cheap gear, but the goal is to get out and shoot. If that means balancing a camcorder on a table, using a cheap vocal microphone and a rusty old reading lamp, that’s just fine; whatever works, works.

Russ Fairley owns a Toronto-based video production company and is the host of RFShow.TV.