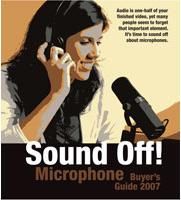 Audio is one-half of your finished video, yet many people seem to forget that important element. It’s time to sound off about microphones.

I was watching a neighbor’s video of his child’s school play. The kids were adorable and the costumes were well done. I would have enjoyed the play very much but for one issue: the sound. My friend and his camera were 15 rows back from the stage; the sound was muddy and indistinct, and it forced all of us in the room to lean forward in an effort to make out every word.

This was a problem that never had to happen. All my friend had to do was buy a simple microphone and, if he had used it properly, his audio would have been much better.

The choices available for better collection of audio fall into essentially two categories: mics intended for words and mics meant to pick up other sounds like music, cheers of a crowd and other ambient noises.

If you watch the TV news, you’ll often see the microphones used for recording the spoken word. These can be hand-held, mounted on a stand or clipped to clothing. We also call these mics “omni-directional.” This pattern is equally sensitive to sound in all directions. The “pickup pattern” of an omnidirectional mic resembles a large invisible ball mounted at the top (or “head”) of the mic. Because the pickup pattern does not exclude all unwanted sound, it may sometimes allow in stray audio along with the desired sound.

Using these mics is pretty simple. Get the mic head as close to the mouth of the subject as possible. Careful! You don’t want to rest the top of the mic on the speaker’s chin or raise a stand-mounted mic so high it blocks the audience’s view of the speaker. A distance of 12-18 inches from the mouth is plenty to ensure a high-quality result, and this is the range the microphone is designed for. In a crowd or noisy area, it’s advisable to move the mic up a little, so the person speaking can drown out the competing sounds. Inch it up slowly until the sound level is more acceptable but still out of sight as much as possible.

A lapel or “lavalier” mic is not hand-held; you normally clip it to a tie, collar or suit lapel for more subtlety than a hand-held mic. Make sure to mount the mic up high and on the side of the body the speaker is facing for the best result, as a left-mounted mic will have trouble delivering clean sound with a right-facing speaker. You can also mount it subtly to a podium mic with the judicious use of tape. Lavaliers are not perfect, as they can pick up the rustle of clothing as they brush against the mic, and high winds blowing across the head can cause a disruption of sound, if you don’t place a quality windscreen over the mic.

Did You Hear That?

If your needs are of a general, wider-area use, like a play, football game or a crowded situation, then a “uni-directional” mic may be more to your liking. The most common of these are cardioid microphones. These mics accept sound primarily from a single direction and concentrate their pickup pattern (shaped like an invisible cone) on a relatively spread-out area. Another great mic is the hyper-cardioid, sometimes called a “boom” or “shotgun” mic. It normally resembles a short length of dark grey or black pipe with slots cut into it. You can mount a shotgun mic on the camera or on a pole. There are shotgun mics for the home user, although they may not be as rugged as the professional version. They are ideal for band concerts, speeches and other locations where sound at a distance is required. They can also “pull” in sound from a greater distance, as the pick-up pattern is narrowly focused.

In our example of the school play, this kind of mic would have been ideal to record the dialogue onstage. My neighbor could have followed the action by aiming the mic in the general direction of the actors as they spoke their lines. Even better, he could have arranged with his wife or another willing volunteer to sit in the first row and follow the action from there, 15 rows closer to the speakers.

Even if you cannot aim the mic precisely, the quality of the sound gathered by using a uni-directional mic is a vast improvement over that caught by the usual mic installed in the camera. In fact, if the camera has an external mounting point, you can semi-permanently camera-mount a unidirectional mic, providing far higher audio quality and avoiding that odd “speaking in a bathroom” sound that seems to haunt many beginners.

No Wires, No Worries…

Maybe You can use a long mic cable to get sound from the mic to the camera, but where’s the fun in that? Instead, many videographers prefer to go wireless, because it’s more convenient, it transmits across areas where cable would be a nuisance or impossible, and it’s a cool gadget, to boot. You’ll find there are two main types of wireless systems available: diversity and true diversity.

A diversity system uses two antennas mounted on either side of the receiver. A circuit in the box compares the signal quality and strength, then switches between the antennas, depending on which one is getting the higher-quality signal. This type can be less resistant to outside interference such as fluorescent lights, strong radio signals or other electronic flotsam drifting through the atmosphere.

A true diversity receiver uses two receivers. The receiver with the strongest signal (as opposed to the antennas) is chosen by the comparison circuit, which switches seamlessly between the two for the clearest possible signal, as a dropout or burst of static on both receivers is unlikely to happen at the same time.

In either case, always shoot with fresh batteries in both the receiver and the transmitter to avoid a steady drop in signal strength and quality. Also, wireless systems can be a little fragile and should be handled carefully. Store them in a padded case or wrap in bubble wrap for long-term storage, and remove the batteries to avoid battery-acid leakage that could damage sensitive components.

A mic is an important step towards better sound, higher-quality video and a better reception from your audience. Now that my neighbor has a good mic, I should be better able to understand the lines from next year’s play!

Randy Hansen is a television news chief photographer who uses mics every day in his travels and regularly carries at least three or four at a time.

How do you get to better audio?

Like anything else, the more you do something, the better you’ll be – the same thing goes for creating better audio for your productions. Use that new microphone in different and creative ways to improve your production: hide it in a vase of flowers, learn how to use a hand-held in noisy situations, etc. Shoot as often as possible with it. After all, as a wise old videographer once said, “videotape is cheap!” (Most of us are still using videotape, right?)

The key is to keep trying to get better, and soon creating better sound will become easier and more automatic. If you can, try out different kinds of mics and see what kind would be best for your particular situation. In other words, practice with them.

Using a mic is not second nature; it’s a skill you need to learn through trial and error. You’ll start out with more error, but slowly, the quality of the audio will improve to the point that the people in your audience will soon say, “that sounded great!”.