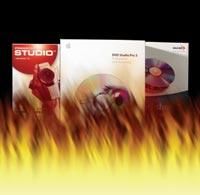 The home DVD production dam started breaking down when computer manufacturers started equipping their products with DVD burners.
But almost as quickly, consumers realized that making a DVD isn’t as simple as popping a tape in a VCR and hitting the record button. That’s because in order to make a home playable DVD at least some basic disc authoring must be involved.

Authoring is the process of creating navigation menus linked to the video content on the disc and converting the raw video stream–typically created in a video editing program or imported from videotape–into the MPEG-2 data expected by all DVD players.

Authoring software is where you create the video, audio and navigation files that you will eventually burn onto your DVD.

Authoring software ranges from very simple programs like Dazzle’s DVD Creator and Apple’s iDVD to the kind of full-scale commercial authoring programs that cost upwards of $1,000.

The original DVD standard was “single sided, single layer” (SSSD) and all DVD burners will write to this basic form of DVD. In their constant quest to improve the industry, however, manufacturers are starting to promote both dual-sided and dual layer DVD technologies. Basically, these are ways to increase the data capacity of a single DVD disc.

Currently, there are few home solutions that allow anything but SSSD authoring, but some do, and dual-layer hardware has begun to hit the market, too.

After the encoding is complete, it’s time to actually write the data to the surface of a disc. For this, you need two things. Blank recordable DVDs and some form of hardware DVD burner–the device that actually uses a laser to write your data onto the blank disc.

As far as blank media is concerned, there’s a lot of confusion surrounding the kind of DVD stock required for making DVD-Video discs. The key point is that simple video playback is actually one of the more basic tasks built into the DVD specification — so the good news is that much of the confusion surrounding the various “flavors” of DVDs — R, RW, R+, R- etc. can be ignored if all you want to do is burn DVD videos.

On the hardware side, there are basically three form factors of DVD burners in common use. Internal DVD recording drives come standard inside many modern computers, external drives connect to a desktop computer via a USB or FireWire port, and the new “standalone” DVD authoring appliances function much like a home VCR but write video to DVDs rather than to VHS tape.

If your computer, like many today, came equipped with a DVD burner, you don’t really need any additional hardware to burn DVDs. If your computer doesn’t have this kind of built-in DVD burning capability, you’ll need to purchase a DVD burner. External DVD burners generally have a USB or FireWire connection, while most internal DVD burners have an IDE interface (though some Serial ATA DVD burners exist.) Many brands are available from companies such as Pioneer, Sony, Plextor and NEC, and some even include basic DVD creation software bundled with the hardware.

Once you have authored and burned your DVD, your job still isn’t finished unless you’re happy to live among stacks of unlabeled blank discs. Disc labeling systems fall generally into two categories. The first is “peel and stick” labeling systems from companies like Avery and Fellowes.

After you’ve authored and labeled your DVDs you’ll probably want to put them in protective cases. Commercial DVDs are usually accompanied by printed covers and contents lists, and for the home DVD creator, there are plenty of DVD label printing templates such as those bundled with the popular CD Stomper systems that let you set up and print your own DVD artwork to complete your package.