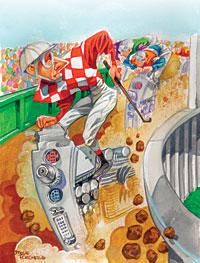 Yep, personal computers are a lot faster than ever before. So fast, in fact that it’s perfectly possible for someone to dive in and do video editing on many manufacturer’s basic turnkey computer systems without the need to add on any video-specific hardware. But does that mean that a turnkey is the best approach?

Long-time practitioners of desktop editing know that with a task as demanding as video editing, sometimes the smart approach is to relieve the computer’s CPU and offload the capture tasks to some speedy dedicated hardware. Enter the Digital Capture card. The heart of many desktop video-editing systems.

Digital capture cards take an incoming video stream, whether via Analog input, IEEE1394 (FireWire) or even high end formats like SDI and they transfer it to your hard drive. Sometimes, this involves converting the data into the kind of digital files that your software can handle.

The market for these dedicated digitizers is well established. You’ll find a wealth of choices from simple cards built to handle basic digitizing tasks to state of the art hardware capable of handling the huge data rates necessary to handle new high-definition video signals.

To help you decide which card might make sense for you, let’s take a look at some of the most popular choices, what you can expect to get and how much you should expect to pay for the capabilities you’ll get.

In the economy space, the good news is that technological advances over the past few years have put new levels of capabilities into most manufacturers basic product lines.

In fact, at the low end, you might not even need to crack open your computer case. Products like the Plextor ConvertX PX-AV100U are a "card in a box" solution, which has all of the video capturing capability that a true beginner may need. Just plug the box into your computer’s USB port (often USB 2.0 for full-frame, full-resolution), install the basic capture software and start digitizing your favorite tapes.

Of course you don’t get any of the bells and whistles that arrive as you move up the video capture pedigree track. If your needs are simple, however, devices like this make it amazingly simple to get started. Video editing really is for the masses and not just for the "serious" amateur struggling with her first indie film.

For just a few more bucks, you can move into a lower cost analog card (Pinnacle Studio DC10+) or even one of the entry-level DV cards like the Pinnacle Studio DV or the basic PYRO card from ADS Corporation.

Remember that some products concentrate on analog conversion allowing you to feed any signal from any video source and digitize the video stream in preparation for using the clips in your editor. Other cards are FireWire compliant, meaning that they can directly accept a digital video signal via an IEEE-1394 cable. This key to making a good choice in a capture card is to understand what kind of video source you are trying to get onto your computer and then concentrate on the cards that match your computer’s capabilities.

In the $100 to $400 arena, you can start to expect some additional capabilities for your money. Cards in this class often go beyond simple digitizing and move up the quality scale. When you move into this area, it’s also necessary to spend a little more time reading the specs to determine if the card you’re considering matches the capabilities of the host machine.

For example, in the Canopus line of cards, the Let’s Edit RT solution at $329 runs on a variety of Windows software systems including XP Pro and provides not only FireWire and analog inputs but also has 24-bit color processing at a resolution of 1024/768. Many of the effects and transitions happen in realtime (RT) and so you often do not have to wait to for renders. That’s a pretty cool feature that software-only editing solutions can not always promise.

Stepping up to the workhorse level buys you lots of additional video processing capability. One area to look for is the color correction capabilities available in this level of card. Onboard color correction at the capture level can help you fix that indoor footage shot at an outdoor white balance settings and, ultimately, save you time.

Perhaps the primary feature of these cards is the integrated package you purchase, which likely won’t just consist of basic hardware. Instead, you’ll find most cards in this class bundled with a nice suite of add-on applications. Sometimes, you’ll find that the complete hardware/software package doesn’t cost much more that just the software by itself.

Pinnacle Liquid Edition, for example, comes with not just the capture hardware, but also with Commotion Pro for motion graphics effects, TitleDecoPro for upgraded titling and Impression Pro for burning DVDs.

Another product with a long-standing reputation is the Matrox product line. The RTX.100 has both NTSC & PAL capabilities and at just $1,099 has both Analog and DV inputs and outputs with some realtime 3D effects capabilities and a full suite of Adobe editing software. The board also has a great breakout box, making it easy to connect (and disconnect) your camcorder to your computer without crawling around under your desk and wrestling with cables in the dark.

The hallmark of the capture cards in this class is dedicated hardware rendering, purpose built to streamline the entire video editing process. You get lightning fast video processing, along with advanced input/output functions such as the ability to digitize not just analog and more resolutions of digital video streams, but high-resolution audio as well. Often, as with the Canopus DVStorm, you can get onboard MPEG-2 rendering, which means that you can either capture in DVD-ready MPEG format or convert your edited source video to MPEG in real time.

Okay, clearly if you’re considering a purchase of capture cards costing more than $2,000, you’re either a wealthy hobbyist or you’re planning on using your video editing system for some real money-making work. And when your career is video, time is money.

Moving into the top tier of thoroughbreds means that you can expect the fastest possible video throughput. State of the art capabilities should also be present for everything from color correction to handling lots and lots of tracks of video and audio all with real-time previews and live video output. Additional capabilities include quick hardware encodes to MPEG for DVD mastering.

At the top of the heap, you should also look for the raw horsepower to allow you to send virtually any stream of video through your system, from simple DV to uncompressed HD. Check the inputs and outputs on these cards and look for SDI and component inputs and outputs as well as uncompressed capture and processing. If you don’t need this sort of interface (or don’t know what we’re talking about), you don’t need one of these cards.

Whether your needs are modest capture card ride for pleasure or if you’re looking for the video equivalent of a Triple Crown winner, one thing is certain: The race is on.