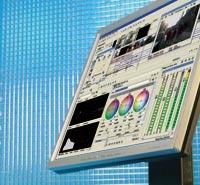 If you are like most people, you look at a lot of display screens. At work, you glue your eyes to a computer monitor for hours on end. When you come home, the television may come on right away. Or maybe you log onto the Net to check your e-mail or surf around for fun. And of course when you edit video, you can stare at the screen until your eyesight starts to blur.


Clearly, getting a good monitor (or two) is important. Fortunately, its not hard to find a decent screen at a reasonable price. You just need to know what you’re looking at.

Technology: A VGA CRT (cathode ray tube) monitor is just a computer screen. Images are drawn by an electronic gun that shoots phosphors on front screen.

Advantages: Potentially bright and sharp images at an inexpensive price. Most support very high resolutions of 1,600×1,200.

Disadvantages: By today’s standards, they are big, bulky and power-hungry beasts.

Recommendation: CRTs are still the best choice for graphics work and video. They are fast and bright and will allow you to preview video quite well.

Technology: LCD (liquid crystal display) technology has been used in laptop computers for years and is beginning to dominate the desktop as well.

Advantages: Small, light desktop footprint. LCDs are also potentially easier on the eyes than a CRT since the screen refreshes in a different way.

Disadvantages: Still a little expensive, especially for larger sizes (over 18 inches). LCDs also are constrained by the specific resolutions they can display and 1,600×1,200 LCDs are particularly expensive. For video, lower-quality models sometimes are not fast enough and can leave behind ghost images. LCDs also do not have as much color depth as CRTs, but final color checks should not be done on either type of monitor anyhow.

Recommendation: LCDs are very comfortable to use. Since they take up less space, consider getting an LCD as a second monitor (if your video card supports this fantastic feature) to your current CRT.

Technology: Televisions are low-resolution CRTs. In the US (and in this magazine), when we talk about a TV, we mean an NTSC television.

Advantages: Inexpensive and can be used for entertainment.

Disadvantages: Every television is different and displays a slightly different image.

Recommendation: Your viewers will probably be watching your video on a television, so you should watch your video on one before distribution. A television will show your video with proper masking, with the correct color space and with an interlaced scan (unlike LCDs and computer monitors, which use progressive scanning). An NTSC production monitor would be better, but a TV is better than nothing.

There are a couple of other emerging technologies that may enter the edit bay sooner or later. Plasma monitors are expensive and primarily designed for entertainment purposes, but some have high enough resolutions to serve as a computer monitor. We are also watching OLED technology, which looks promising, but hasn’t hit the mainstream just yet. In any case, your next monitor will probably outlast your current computer, so choose carefully and don’t be afraid to pay for quality: you’ll probably be starring at it for many thousands of hours.