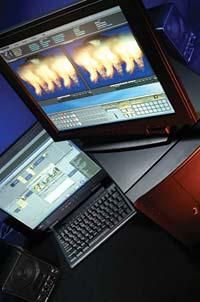 Just two years ago, editing turnkeys were highly specialized machines manufactured by a few dedicated companies. Standardized sub-$30 IEEE 1394 (FireWire) cards and the overwhelming dominance of Mini DV in the consumer space have changed all that. Indeed, including IEEE 1394 right on the computer’s motherboard is almost a standard feature these days.

Technically, any computer with FireWire and basic editing software already loaded on it when you unpack the box is a turnkey. Compaq, HP, Dell, Gateway, Apple and dozens of others build systems that edit video. These system integrators deal with huge volumes and can offer significant discounts. Due to the wide range of products and services offered, however, it is tough to find a video expert at these companies (although they surely exist). If you have done your research and know what you need, customizing a general-purpose computer may save you some money.


Companies that focus on video editing build more complex and specialized turnkeys. These companies build tightly integrated computers specifically designed with video in mind. In general, the smaller companies that build these machines may be more experienced with video, may be in a better position to make recommendations and may have more accessible technical support.

The video capture card is the heart of any turnkey solution. The most basic capture card is not a video capture card at all, but is instead a data transmission protocol: IEEE 1394 (a.k.a. FireWire, a.k.a. i.LINK). Yes, you can use it to transmit video data from a camcorder to the computer, but it is not defined as a video-specific feature. A more useful video capture solution would be one that can digitize analog audio and video from an RCA jack (composite) or an S-video jack (component), in addition to DV.

Video that has been processed by your editing application needs to be rendered or redrawn. Of course, there are a million strange and wonderful things you can do to your video, but all of these operations require rendering, and rendering takes time. In many cases, special effects use your computer’s CPU. On a real-time card, the hardware on the card itself is dedicated to creating these digital effects, which typically results in a much faster render. Once the render speed is faster than the amount of time it takes to play back the section of video with the effect, the effect is said to be "real time," since you never actually have to wait to see the results.


The need for real-time effects is becoming less and less acute. Back when we were editing on 200MHz computers, the value of special effects cards was unquestionable. The availability of dual CPU 2.0GHz monsters that can crunch software effects in record time changes that. Further, almost all editing applications now preview your video in real time without any special hardware (the exception is the still-common Premiere 6.0). The ability of the software to preview effects directly ties into the speed of the computer, which brings us back to the inevitable fact that faster computers will soon allow everything to happen in real time.


Remember, we are talking about real-time previews. This is an invaluable feature, but don’t confuse it with real-time rendering. Many applications, and indeed many real-time hardware capture cards, only preview effects in real time. When you are ready to export the timeline back to your DV camcorder, you will often need to take the time to render the project anyhow. So much for real time.

There are two other important features that may distinguish a video editing turnkey. The first is a dedicated video hard drive. It is a good idea to have a physically separate, 7,200RPM hard disk in your computer that you use to capture video. For $150, you can buy a huge amount of storage these days, and since video uses more disk space than anything else on your computer, we’d stress this as a very important part of any turnkey.


The second feature to look for in a turnkey is dual-monitor support. This allows you to stretch your editing workspace across two screens, effectively doubling your real estate. This is decidedly less important than having dual disk drives, but is a sure sign of a serious editing system.


With many video capture cards, the timeline preview goes out of one of the analog connections to an NTSC television monitor. Many editing software applications allow you to send a preview out through your DV camcorder (via IEEE 1394) to a television.

So just what is a turnkey? At a minimum, it is any computer that comes with an IEEE 1394 card and editing software. You have distinctly more flexibility with analog capture (perhaps on the video display card), an IEEE 1394 card and Premiere LE. But these systems can drift into truly full-featured NLE powerhouses if you consider that your display card might be a cutting edge GeForce 4 card with S-video and RCA video in as well as dual-monitor support. Add another hard drive to the base system and it is suddenly a nit-picking matter to distinguish a loaded general-purpose computer from a true dedicated turnkey.


Like any major purchase, research is required. And if you need expert advice, the company you buy from may be just as important as the gear you buy. In any case, this buyer’s guide will help you seek out the features you need.

[Sidebar: Do it Yourself]

Why not build a computer from scratch yourself? Just five years ago, you really had no choice. And we’d definitely agree that it is easier today than ever before. But before you do, consider this: