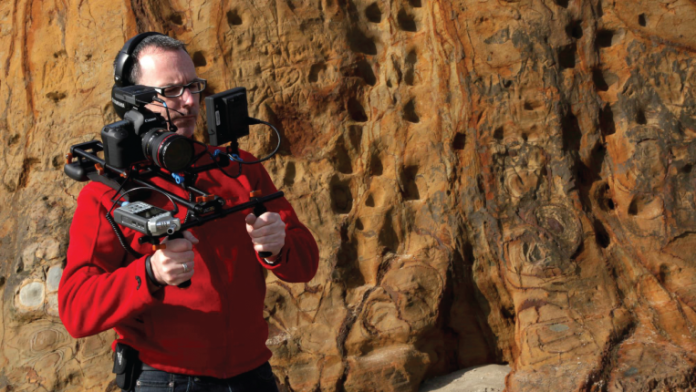 Let’s get the tech side of this out of the way. There are three types of rail systems. The size of most prosumer rail systems are 15mm rods spaced 60mm apart (from center to center). This system is sometimes referred to as the 15mm Lightweight System or LWS. The 15mm measurement is the diameter of the rod.

There is an older 15mm rail system usually referred to as the 15mm Studio system and though it uses the same size 15mm rods, they are spaced out 100mm apart. The system is also offset from the center of the camera lens, most likely to compensate for older gear that was attached to the rig.

Finally, there are the 19mm rail systems for bigger cameras. These larger diameter rails are spaced 104mm apart. These are often referred to as 19mm Studio rods and are less common in most of our prosumer worlds.

If you buy a rig from your favorite brick-n-morton or internet store, you’ll most likely get the 15mm LWS rig system. But if you are one of those do-it-yourself types who are trying to save money by buying the parts from China on eBay (this is a possibility, quality varies), look closely at the specs.

The 15mm LWS system could be made from carbon fiber, aluminum or stainless steel. The two studio systems are mostly constructed from stainless steel. If you need super strong support for your rig there are HD rods… no, not High Def, it stands for Heavy Duty. The rod walls are twice the thickness of other rods.

The rail’s length is usually measured in inches so you American’s don’t need to get out your metric converters. Many rods come with internal 1/2-13-inch thread so they can be extended or accessorized. Again, if you are going DIY, check to make sure your accessories match your rig.

Rigs are really Erector Sets for adults, and much more fun. Look “Erector Set” up in a search engine if you weren’t fortunate enough to grow up with these. Most users I know buy a complete set to begin with then start adding on. For example, I bought the Straight Rig from Jag35. I then needed an extension arm for my five-inch Marshall monitor while on a job in Portland Oregon. Pro Photo Supply of Portland didn’t have this arm from Jag35 but did have one from Redrock Micro so I know have a light blue thumb screw on my rig which is mostly made up of orange thumbscrews. All of these rigs are 15mm rods so they’re all interchangeable.

You can attach a follow focus, a matte box, handgrips, microphones, audio recorders… the options are endless.

And the fun doesn’t stop there. You can attach a follow focus, a matte box, handgrips, microphones, audio recorders… the options are endless. Throw on some fuzzy dice for flare.

One of the most used tools on a rig is the Follow Focus. The tricky technique of following the action using a follow focus system is referred to as racking focus or pulling focus. On large budget narrative films, the person who is trusted with this difficult task is traditionally called the focus puller. This crew member is an important member of the camera department and is usually given the title of First Assistant Cameraperson.

For us mere mortals not living in Hollywood, we’re usually the Director of Photography as well as the First Assistant Cameraperson… and the audio engineer and the producer and the production assistant, etc. Luckily a rig makes pulling focus a lot easier for a crew of one.

The fairly simple handgrip dial is attached on the rig near the lens on the camerapersons dominate hand. The dial controls a gear which is synced with a flexible band of teeth that is attached to the lens. A white disk surrounding the dial can be marked with erasable pen to mark first position, second position and so forth. The device is fairly simple but the technique needs practice. Good follow focus devices can easily run more than $1,000 so do your research for your actual needs and budget carefully.

The Uses are Endless

I’ve used the rails of my rig without even using my camera. I was doing audio for a narrative short on the streets of New York City and I needed to mic three actors with wireless mics. I attached the baseplate of my rig to my tripod, attached two 15mm rails, slipped on three cold shoe spuds to hold each of the wireless mic receivers. I had two handheld audio recorders also attached to the rails and I was able monitor all of my mics in one easy-to-see place. I was also able to move from location to location with ease by moving the entire collection of devices as a single unit.

More is Not Always Better

A word of warning. Building your Erector Set rig can be fun and can give you much more control on set but it can also slow you down. More is not always better. If you need to be more run and gun, building and adjusting your rig might bog you down more than it helps. Before you drop all of your hard earned earnings on a humongous rig, make sure it fits your workflow.

Morgan Paar is a freelance shooter/editor/producer as well has a filmmaking instructor. He is currently shooting, with his rig, in Croatia. Paar is based in Amsterdam, Netherlands.