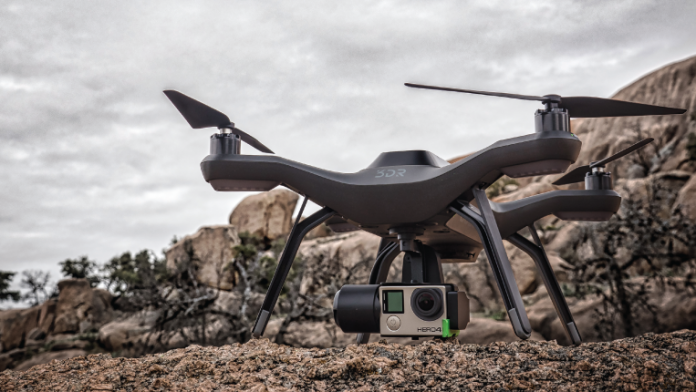 Aerial footage is a great way take production value to new heights. Recently, drones have given filmmakers an affordable way to provide the stunning shots that just a few years ago required renting a helicopter. Quickly becoming a ubiquitous part of every kit, there are some basics that every prospective drone buyer needs to keep in mind.

Recently, drones have given filmmakers an affordable way to provide the stunning shots that just a few years ago required renting a helicopter.

The main factors a new drone buyer will want to consider are: camera, image stabilization, flight time, and, of course, price point. Cameras can either come attached, built in, or completely separate as an aftermarket add-on. Factors to compare between cameras include resolution, frame rate and field of view. Image stabilization often comes in the form of a gimbal, but some manufacturers are using alternative methods to obtaining smooth footage. Flight time is another key issue, as the user want to make sure they have enough time to get into position and get the shot. As with most gear, price point can be a major factor in the balancing act of determining which drone is right for you. This article focuses on these main issues, and will also look at other distinguishing factors between industry-leading drones, including range, storage media and unique stand-out features.

The cameras for all three models have a 94° field of view and come attached with a stabilizing 3-axis gimbal. They also offer the ability to be monitored and controlled from your smartphone or tablet, while flying the drone itself is controlled by an RC transmitter. The Phantom 3 records to microSD cards up to 64GB and gets about 23 minutes of fly time.

The Phantom line of drones is currently the market leader and is generally the safest purchase if you want a good mix of image quality and approachable flying. Their wide usage also means there is a rich community to turn to for support.

The 3D Robotics Solo is a newcomer, but has already made quite a splash. The Solo was designed without its own built-in camera that other drones feature, and instead functions as a companion for GoPro camera systems. A gimbal, which is sold separately, can be used to stabilize the GoPro during flight for smooth video.

The 3DR Solo retails at $999, with the gimbal costing an additional $399, still leaving the user on the hook to supply their own camera. It is designed to work specifically with GoPro, so if you plan to use your drone with another brand of camera, you should look elsewhere. The Solo is already set to transmit HD video to your wireless device, once camera and gimbal are attached.

The Solo has an 800 meter range and 20 minutes of fly time with the gimbal attached. What sets the Solo apart is its focus on the user-experience and automation; it has a number of pre-programmed flight patterns aimed at enabling the easy capture of cinematic footage. This makes it an appealing choice for new users who will appreciate Smart Shot functions such as Selfie Mode, which centers the user while flying up and away; CableCam, which flies locked onto a straight-line path, while allowing the camera to pan and tilt; Orbit, which circles a specific object; and Follow, which keeps the Solo wirelessly tethered to a moving operator.

Solo is also open source, giving free reign to third party developers to create new flight patterns, functions and hardware for the platform. 3DR hopes that this will allow for innovation and customization not yet seen in drones. Toward this end, the Solo is built with spare compartments that can be used to house future accessories.

Solo also has the capability of being controlled manually, so control-freak pilots shouldn’t be put off by the focus on autonomy.

It’s worth mentioning that the Solo team includes former DJI employees, notably, Colin Guinn who is credited with helping develop the original DJI Phantom in 2012.

Parrot has previously been associated with RC toys including the A.R. Drone but is now stepping into a new realm with higher-end drones focused on video and stills.  The Parrot Bebop is their new release, which comes in at $499 for a basic model. The Bebop offers 1080p video capture, recording onto an internal 8GB flash memory storage.

While the Bebop does not have a gimbal, it does offer a unique stabilization system: the camera has a 180° FOV, and internally crops an image in order to maintain stable video. This leaves the useable image area smaller than the field of view. From sample footage, this method of stabilization seems to do the trick, providing smooth shots. This also allows the Bebop to be smaller and lighter than would be possible with a gimbal. It has a range of 300 meters using a smartphone or tablet as a controller and offers 12 minutes of flight time per battery — it comes with two.

The Parrot Bebop is also available with the SkyController (bundled for $999), a WiFi controller that extends range to 2000 meters. The SkyController can be used to control the Bebop on its own, or in conjunction with a smartphone or tablet for monitoring the camera.

Parrot products are generally considered to be for consumer use only, and we would agree with this assessment. The video quality does not compare with what you’ll find from a higher-end action camera or even mid-range drones like the Phantom series. However, we consider the Bebop to be more than suitable for enthusiast use.

The Lily Camera was recently announced, and won’t be ready to ship until February 2016, but its aspects are worth examining. Pre-order prices started at $499 and periodically raise in increments, until they reach the retail price of $999. The Lily’s camera shoots in 1080p at 60 fps or 720p at 120 fps for slow motion and utilizes digital stabilization.

The Lily has a waterproof body, allowing use in the rain, however, its design means the battery is sealed internally and not interchangeable, as with other drones. The battery allows for 20 minutes of flight before it needs to be recharged, which takes two hours. The Lily offers 4GB of onboard storage which can be augmented with a microSD card.

The most unique feature is that the Lily was made to be flown without a controller. Instead, it moves in relation to a wearable transmitter that the drone tracks. Basic commands such as “Follow,” “Lead,” or “Circle” can be set on the transmitter, which also functions as a microphone, automatically syncing to footage from the camera. The Lily will stay a minimum of five feet away from the transmitter in both horizontal distance and altitude, with maximums of 100 feet horizontally and 50 feet of altitude. While the Lily’s transmitter system might not have the flexibility to shoot any subject, its automated tracking does have intriguing possibilities.
We file the Lily drone firmly in the “interesting but not yet recommended” category, since we haven’t yet had a chance to personally see it in action, and it isn’t yet available to the public. We can’t deny, however, the that if Lily can deliver on what it promises, it will certainly be worth consideration.

In choosing the right drone for you, one must consider their filming needs and budget. There is no one-size-fits all. One filmmaker might want to focus on ease of use, preferring an automated system to get the shot without having to practice precision flying. Someone else could find range and fly time might be the most important factors. To others, image quality is alpha and omega, at any price. With the market quickly growing, there are plenty of options for adding an aerial camera platform to your video arsenal.

Part of flying a drone is potential mishaps. Especially when learning how to fly, and — more important — land! A hard landing can chew up props, or worse. In determining the right platform for your needs, it can be important to consider availability of replacement parts. The Parrot Bebop and DJI Phantom seem to be the easiest to obtain extra parts for at this point, with their lines each having a decent market history.  The newer drone manufacturers might need some time to build up a range and supply of replacement parts, which could be a factor in making your decision.

Safety precautions are important when flying around people and/or in sensitive places. The Parrot Bebop comes with a removable hull that encases the props as an option for safer flying. Similarly, DJI Phantom 3 and the Aries Blackbird X-10 offer prop guards as aftermarket parts. 3DR states they are working on a LiDAR system for safe indoor flight and an emergency parachute accessory for the Solo, but there is no official release information for either. Having the right considerations for your project will be an important part of safety when putting a machine in the air.