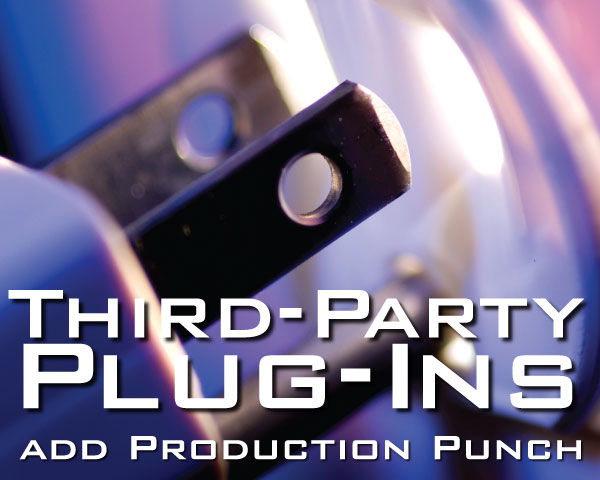 This article can only hope to scratch the surface of what's out there, but let's run down some of the more intriguing plug-in manufacturers, whose products can add dramatic punch, and additional features, ranging from automating basic tasks, all the way to cinema-level effects, to those programs. 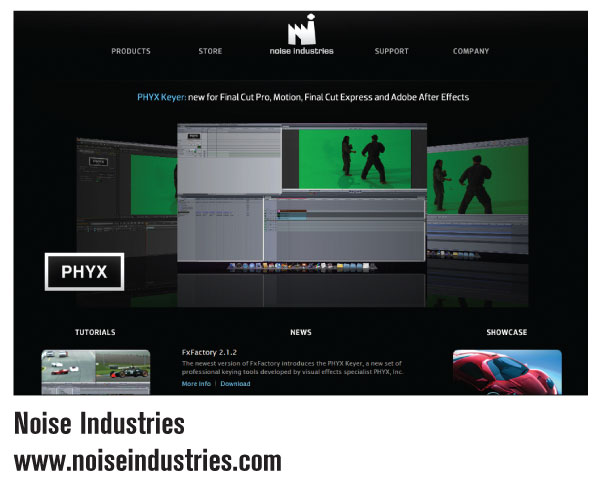 Noise Industries specializes in Apple-only plug-ins for Final Cut Pro, Motion, Final Cut Express and Adobe After Effects. Their proprietary FXFactory plug-in management software will even allow for some simple, but cool free plug-ins to be downloaded, in addition to their more complex applets. These include a variety of professional-looking titling and compositing effects, including "Hud." This plug-in will generate overlays that produce the sort of electronic binocular effect seen in the original 1977 Star Wars – only much slicker looking. And then there's "Star Titler 1.0.3", a free plug-in which, as its name implies, quickly recreates that film's iconic opening title crawl.

The products of GenArts, Inc. have been used to create the special effects seen in Iron Man, The Chronicles of Narnia, The Lord of the Rings trilogy and the CSI TV series. For the computer-based editors and compositors, GenArts creates high-end plug-ins for platforms including Autodesk, Avid, After Effects, and Final Cut Pro, as well as the OFX standard. 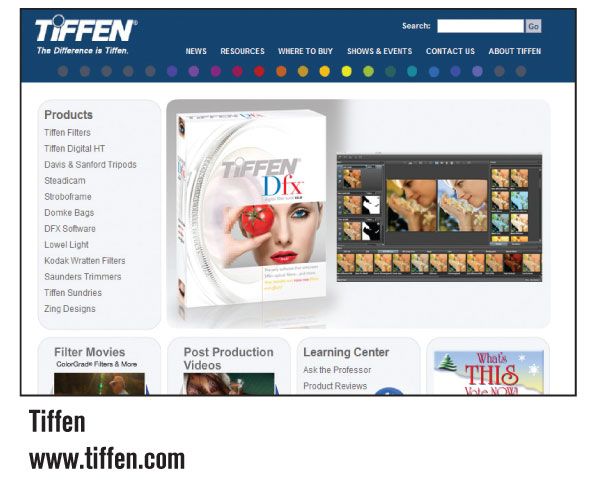 Tiffen has been producing filters for film and video camera lenses for over 70 years. More recently, they've added a line of digital filters called DFX V2. They're available in both a stand-alone format as well as in the form of plug-ins for FinalCut Pro, After Effects, Avid and Photoshop. Plug-ins include masking, lighting effects, star filters, high contrast, and other effects originally created for the still photography world, but available for the aforementioned NLEs and motion compositing programs.

Red Giant Software includes a variety of plug-ins, including their well-known Knoll Light Factory (a one-stop shop for simulated lens flares, photon torpedoes, and other lighting effects), and Magic Bullet applets. For harried editors who simply want to quickly engineer a unique look to add atmosphere to a shot or scene, thumbing through its numerous presets of the latter product to dial-up a look is often all it takes. For those who wish to fine-tune those images, the presets allow a seemingly endless variety of additional tweaking. Magic Bullet is also the perfect tonic for those wishing to add a film-style look to a project, or to jazz up a video or digital animation with unique tints and colorings. 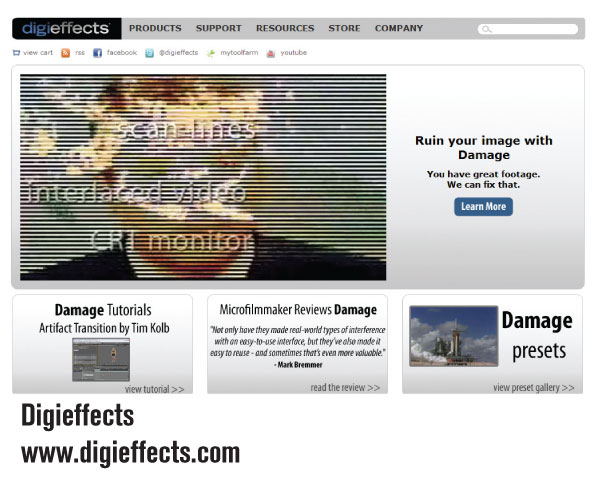 Of course, some plug-ins are designed to rough-up your video, rather than sweeten it. For example, the motto of the plug-in called Damage, by Digieffects is "you have great footage – we can fix that," and its titular destruction can create looks ranging anywhere from a beat-up old VHS tape, to the scan lines of an ancient CRT, to artifacts that replicate those of poor satellite or terrestrial antenna reception.

If you're shooting sci-fi or drama, and want to recreate the look of a signal coming in from halfway across the galaxy, or merely halfway across planet earth, this plug-in will quickly do the trick.

Florida-based Digital Juice, Inc. is probably best known for its "Jumpbacks" – seamlessly loopable digital background clips in which text, still photos and video can be overlaid. But they are beginning to explore the plug-in market as well. Their proprietary "Juicer" software quickly renders Digital Juice's Jumpbacks, stock footage, and fonts to a variety of formats for editing and compositing. In 2009, they began offering several low-cost aftermarket downloadable plug-ins, primarily for their font software, to create additional textures, colors, positioning effects for their already stylish and growing collection of fonts designed for video titling. 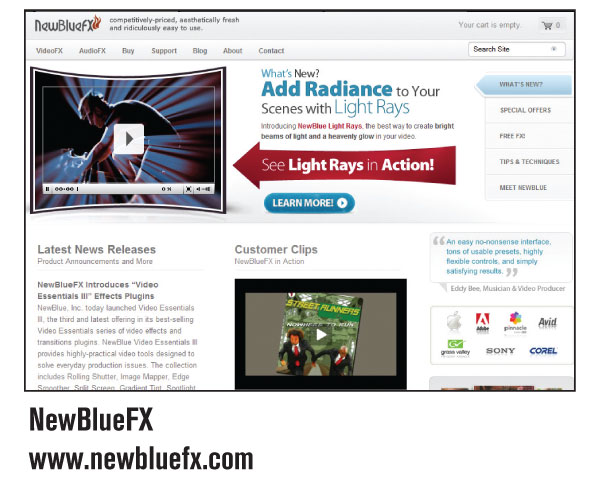 In existence since 2001, NewBlue Inc. also makes plug-ins designed to alter the look of whole scenes, including their Video Essentials line of bundled plug-ins. But perhaps their most intriguing products are their transition effects. Most non-linear editing programs include basic dissolves, irises, wipes, etc. And since most edits shouldn't call attention to themselves anyhow, it's possible to get through many productions with those alone. But there are times when a transition calls for a major flourish, whether it's to create a distinct modulation between segments, or simply to "wake-up" an audience two-thirds into a production with a wow moment.

Sound Is Half The Picture

As George Lucas likes to say, sound is half the picture. So when shopping for plug-ins, don't scrimp on the audio half of the equation. As a result of a quarter century or so of the music industry's exploration of the computer world, there's a whole arsenal of audio plug-ins available, many of which have plenty of use when crafting a video.

The Ozone 4 plug-in by Izotope, Inc. provides a variety of audio mastering effects, and is bundled with loads of handy presets that can add the final sheen to a mix. Its built-in exciter, and its presets for voiceover work can help to dramatically push a voiceover narration to the top of an audio mix, without cranking the volume of the narrator into distortion.

Also useful for dialogue work, Izotope's RX plug-in can make quick work of removing camera noise, air conditioner hum, ground loops, and other on-location vagaries, by digitally mapping the roomtone of a scene without dialogue. Plus it can quickly remove popped-Ps and other plosives in dialogue. 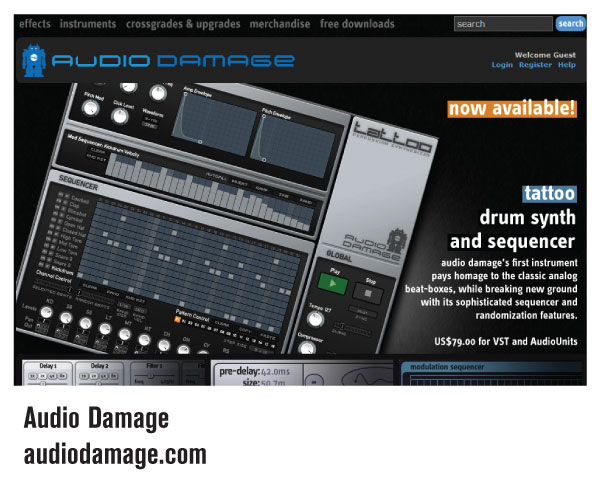 A much more extreme effect is the Discord2 plug-in from Audio Damage, Inc. It's an extremely affordable recreation of Eventide's breakthrough (and budget-breaking) rack-mounted Harmonizer from the mid-1970s. If you want your star to sound like a high-pitched alien, or as deep as a certain black-helmeted basso profundo-voiced Sith Lord, this plug-in will do the trick. And it can create dramatic echo…echo…echo effects that descend or ascend in time as they fade away, perfect for adding the same sort of audio punch to a word during a transition to a new scene, as some of the aforementioned visual transition plug-ins.

Some audio plug-ins will be directly compatible with your editing system. Others may require a separate digital audio workstation, or DAW for short. But then, there are numerous times when a DAW is necessary to sweeten or repair a soundtrack anyhow.

The right plug-ins can dramatically expand the look (or sound) of a video project. As you go through the accompanying buyer's matrix, keep in mind the projects that make up the bulk of your current production work, and consider the ways you'd like to tweak their style, as well as your budget. Chances are, you'll quickly find a plug-in that will help you do just that. Happy editing!