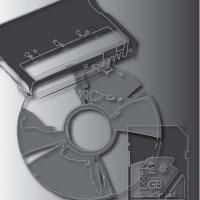 It’s easier now than ever to fit large quantities of video into a very small physical space.

For you to be able to acquire video, you need media of some kind, whether it’s videotape, optical media, a hard drive or even a memory card. (Remember back in the days when the only way you could record video was to use a videotape? Takes you back, doesn’t it?) The type of media you need is a function of your camcorder, obviously, but there are some choices to make. Let’s dive a bit deeper.

It’s pretty clear at this point that Mini DV (and its mechanically-identical cousin, HDV) is going to be the last tape format we’ll see, as most of the new camcorder designs are using memory cards and hard drives as their recording media. Tape is cheap, easy to get, fairly durable and has a decent shelf life. However, a unique disadvantage of tape is that it’s linear – if you’re at the beginning of the tape and the bits you need are at the middle of the tape, it’ll take a moment to get there. Compare that to a disc, where you have instant access.

What can’t you put on an optical disc these days? It’s so easy and convenient to put a few files onto a CD. DVD will be around for a long time, since the discs are inexpensive and very easy to get. It’s too early to tell on Blu-ray Disc at the moment, though – it’s still a moving target to a large extent – but it’s plain to see that prices will only decline in the next year or so.

There are two different sizes of optical discs. You generally use 12cm discs for final authoring and 8cm discs for acquisition (but they are relevant to this discussion only for the purposes of DVD and Blu-ray Disc). There are also write-once and re-writeable versions of all of these discs. DVD and BD media are available in single- and dual-layer versions as well. And for DVD, there are both DVD-R and DVD+R permutations, as a result of a mini-format war that fizzled out (but not before causing some unnecessary confusion among early adopters of DVD burners).

While, at the outset, it doesn’t seem like Direct Capture Devices (DCDs) belong in this discussion, we think they merit at least a few sentences. DCDs are designed to be attached to a Mini DV (or HDV, depending on device) camcorder via FireWire, allowing them to capture and record the data stream directly from the camcorder. This way, the data that lands on the videotape is now also on the DCD’s hard drive, allowing for faster-than-realtime capture to a computer, or sometimes editing directly on the DCD, depending on the device.

Camcorder manufacturers have noticed the technology in DCDs, and many are now marketing hard drive-based camcorders. It took some time for hard drives to become small enough and have large-enough capacities to be adopted for use inside the camcorders themselves, but now it’s not hard for manufacturers to source 1.8″ hard drives in capacities larger than 40GB.

Something that has taken the video world by storm over the past few years is memory card-based camcorders. The promise of higher durability and fewer moving parts is winning a lot of fans among consumers and manufacturers alike. One hurdle that has fallen is that Flash memory only recently became fast enough to reliably record data at the speeds that are demanded by video streams.

The beauty of it, though, is that SD/SDHC, MultiMedia Card and Memory Stick (in its many permutations) are easy to get and not very expensive anymore. The downside is that all of the cards are downright tiny – losing them is a very real worry, unless you are very well-organized.

In the same vein, Panasonic’s P2 cards use several Flash devices in tandem to achieve the bandwidth needed for handling gently-compressed high-definition video. Sony and SanDisk used the same rationale while developing the competing SxS system.

The future brings the promise of holographic media. One of the most-likely systems for adoption, Holographic Versatile Disc, may be able to hold up to 3.9 terabytes on a standard-sized (12cm) disc. Initial cost is a problem (of course), and the fact that the current system requires a relatively high-powered green laser also makes for an interesting engineering challenge. However, considering that Blu-ray Disc brought blue laser technology to the masses (even though Blu-ray Disc media and drives are hardly commodity items yet), we look forward to seeing how the challenge will be solved.