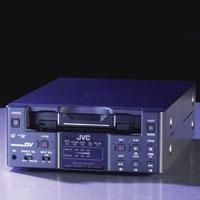 In the days of olde, a videotape deck was an important member of your video editing arsenal. Believe it or not, it is still an essential tool for many editing situations.

I may be dating myself a bit, but I remember the heavy days of carrying a videotape recorder on my shoulder for those early consumer video cameras. The VCR portion was ultra heavy, while the camera had a crappy picture but a rather cool telescoping microphone. Well, that was the early 70s, but few realize that the first videotape recorder was invented just after the beginning of the1950s.

While Bill Haley and his Comets were rocking around the clock and the Fonz was hanging out with Richie and Potsie at Arnold’s, Charles Ginsburg led the research team at Ampex in developing the first practical videotape recorder (VTR). The image wasn’t clear and sharp. In fact, you could barely discern it as an image. The heavily-modified Ampex 200 tape recorder recorded “blurred and indistinct” images on standard 1/4-inch (0.6cm) audiotape moving at 360 inches (9.1m) per second. But it was a beginning.

A year later, using one-inch (2.6cm) magnetic tape, Ginsburg’s team had improved the quality to the point that it had “a persistent grainy quality that looked like a worn motion picture.” That meant it was still inferior to the state-of-the-art kinescope recordings on film. It took Bing Crosby Enterprises to take the professional leap into the bold new world of videotape operations. They worked for four years to develop a commercially-viable videotape recorder for broadcast TV. Their 1/2-inch tape system was similar to Ampex’ original design, just taken to the next logical step. If Ampex hadn’t introduced the Ampex Quadruplex reel-to-reel video system, Bing Crosby’s updated design would’ve gotten the attention of broadcasters. But the Quadruplex system was too good to pass up and became the industry standard for 20 years.

In 1969, Sony introduced the composite U-matic system, which used a cassette of 3/4-inch magnetic tape. It was only a prototype, but two years later, after creating an industry standard with other manufacturers, Sony released the first commercial Broadcast Video U-matic Recorder, or BVU. It would have a lock on the professional industry until 1982, when Sony again released a format which could have taken the commercial and consumer worlds by storm: the 1/2-inch Betacam format. Sadly, Sony was hesitant to license Betacam (called Betamax) to competing consumer manufacturers and lost the market to the emerging VHS system. But thanks to a digital upgrade in the 90s, Betacam is still popular among professionals.

Since then, videotape recorders have never looked back. But is there room for VTRs in the digital age? Or has this magnetic medium gone the way of so many other pioneering technologies before it? Well, thanks to a digital makeover, videotape recorders can still play an important part in video production. And some are flat-out necessary. Gone are the days of reel-to-reel takeup or -inch pneumatic tape cassettes. The current state of the art, like its camcorder cousins, relies on digital tape, which can record up to an hour in high-quality HD.

In 1997, Sony once again gave its Betacam system a makeover, creating two HD variants, HDCAM for standard models and a higher-end HDCAM SR. The SONY HVR-M15U, for example, is well suited for desktop applications, with its recording in 1080i, DVCAM and DV SP formats. It can also play back HDV at 720p, although in analog only. Additionally, the HVR-M15U has the ability to down-convert HD to SD when necessary and can also switch from NTSC to PAL on the fly. It’s available for around $2,400, which is quite a bargain for a high-end editing deck.

If you are looking for a quick and affordable upgrade to HD, then you may to take a hard look at JVC’s entry into the professional VTR market: the ProHD BR-HD50U HD Recorder. For just over $3,000, this deck packs a lot of features. Switchable between HDV and DV formats, this VTR has FireWire inputs and outputs via a standard 6-pin connector. It takes full-size DV and miniDV cassettes and can record up to 276 minutes of video in standard or high definition. Formats supported include 720p in 24, 25 and 30 frames per second. Thanks to its sophisticated cross-converter function, output can be not only in 720p but also in 1080i, and DV formats of 480/576p and 480/576i signals. Plus, the switchable HDV and DV recording mode gives DVCAM playback as well, so users have a wide variety of options when adding this recorder/player to an existing editing system.

Where will videotape recorders go from here? With competing formats like professional Flash storage and hard drive-based cameras constantly attempting to bleed off market share, only time will tell if videotape can maintain a hold on professional editing. And then there’s the never-ending promise of optical storage. Still, high-tech and digital upgrades to the format have proven that videotape recorders will remain an integral part of any editing suite for the near future.

Side Bar: Explanation of Feature Headings