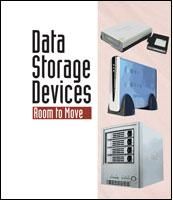 A quick overview of storage considerations for video.

There’s a lot of considerations for data storage devices when you’re dealing with video, especially if you’re storing HD video. You need room on a hard drive for capturing footage. You need a scratch drive for rendering effects. You need an optical drive for outputting your projects. You might need an archive system too.

With all the need for storage, where do you start? Well, by reading this sentence, you’ve taken the first step in realizing that storage is a vital part of your video workflow. We’ll try to take you through the rest of the way.

Your editing computer has at least one hard drive. This drive is used to boot your computer and also to store your applications. You could capture video to this drive, but the better way is to capture to a different hard drive. (A lot goes on behind the scenes on your computer, all requiring a lot of hard drive writes. These writes accumulate and degrade the performance of the drive for anything else you need to do with it.) You can add another drive fairly easily if you know what interface your machine uses.

The most common interfaces that data moves through on its way to or from storage media (on the type of computer system most of us use) are ATA, SATA, eSATA, USB 2.0 and FireWire. ATA and SATA are internal interfaces. eSATA is the external version of SATA-the primary difference is the use of a different connector that is more tolerant of abuse. All of the speed that SATA offers is duplicated with eSATA.

FireWire and USB 2.0 are popular for their ease of use and portability, though neither has the raw performance of ATA, SATA or eSATA. While FireWire and USB 2.0 are both fast enough to handle DV streams, the performance hit will rear its ugly head when you’re rendering effects or your final project. That said, if you find yourself needing more hard drive space right now and there’s no eSATA port and you don’t have room for another internal drive, it’s hard to go wrong with a FireWire or USB 2.0 drive.

There are also some benefits to using a NAS, or network-attached storage device. If you have a gigabit Ethernet switch between this device and the computers you edit with, you can get some remarkably high data transfer rates. The added benefit is that you can access the same files from any computer on your network.

What should you look for in data storage devices? Capacity is the first thing that usually comes to mind, naturally. The sweet spot for price vs. capacity (lowest cost per gigabyte) is moving toward 500GB drives, now that the big manufacturers are shipping 750GB drives and have announced 1TB drives. You’ll also see a reference to cache size-8MB is most common, but anything above 2MB is generally fine. Big caches give you a speed advantage for dealing with a lot of small files, not a handful of really big files. Spindle speeds of 7200 rpm are the most common you’ll come across, for good reason: they’re fast and they’re a good value. While you can get 10,000 and 15,000 rpm hard drives, they’re pricey and they run hot. But if you need to render something really fast, this is one potential place where you could get a speed advantage. We think the best place to implement a drive with a spindle speed above 7200 rpm is as a scratch drive, though we’ve seen a few computers that have them installed as boot drives.

Once you get your project just the way you want it, you need to output your project. If you’re operating in standard-def, this means writing a DVD (see the January 2007 issue’s DVD Authoring Software Buyer’s Guide for more on this). DVD burners have become nearly a commodity item, but there are some differentiating factors. First, check out the software bundle. OEM versions of a popular disc authoring program and a DVD-Video player app are the most common apps that you’ll come across. If the drive includes LightScribe, the ability to burn a label directly to the reverse side of special discs, labelmaking software is generally included as well.

Most drives sold today burn both DVD-R and DVD+R, along with their rewriteable variants. A handful of drives can also handle DVD-RAM as well. CD burning is pretty much a given as well, but it’s important to note that one drive that lacks CD reading or writing capabilities is Pioneer’s BDR-101A Blu-ray Disc burner.

Speaking of Blu-ray Disc, this is the most common HD disc format for burning at the moment. Toshiba, however, has finally announced the first HD DVD burners, the SD-H903A (desktop) and the SD-L902A (mobile). It’s worth noting that most disc authoring software titles that are aware of HD burners are aware of Blu-ray Disc drives and not HD DVD at this point; but we’d half-expect some software developers to offer patches to allow burning of formats they don’t already support. It’s still too early to declare a winner to the format war, but the entrance of an HD DVD burner to the fray certainly makes things more interesting. As magazine editors and as fellow consumers, we just hope the war draws to a conclusion-the sooner, the better.

Now that you’re done with your project, what do you do with the raw footage and all of your project files? If you logged your tapes with your editing software, you won’t need to keep the original capture files around, since you can re-capture from tape if necessary. If you’d rather not re-capture, you can burn everything in your project to DVD (you’ll probably need several DVDs for bigger projects) or onto Blu-ray Disc or HD DVD. Another option for really big projects or recurring clients would be simply copying all of your project files, including video clips and audio clips, onto to a new data storage device, then removing the hard drive and putting it into a padded box and onto a shelf with a label. This is a somewhat expensive option, but it’s an extremely convenient one.

As far as long-term storage of any type of media goes, the maxim “if you’re comfortable, it’s comfortable” can be safely followed. Avoid wild fluctuations or extremes of temperature and humidity, and keep the dust down if at all possible. The general recommendation is 68 degrees Fahrenheit at 40% relative humidity. There are some good discussions of best practices for archiving your media online-do a little searching and you’ll find the information you need.