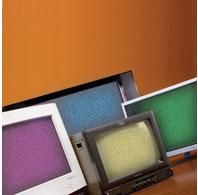 The Big Four of Television Technology

As recently as ten years ago, choosing a video monitor essentially meant picking some flavor of cathode ray tube technology. But that was before digital TV and, especially, HDTV. The burdens these newer technologies place on monitor design have caused new successors to emerge to challenge the time-tested CRT format, and those successors are making quite a splash.

Since monitors are no longer a one size fits all technology, let’s look at some of the decisions involved in choosing a new monitor.

CRT: An Old Standby Soldiers On

“CRT technology is quite mature, is declining in sales, but absolutely is not dead” Chris Pollitt, product marketing manager for PC displays at Philips (www.philipsusa.com) says. But “when you’re looking at editing video, one of the things you want is the most accurate color. CRTs, even though it’s old technology, still have the highest color gamut, covering pretty much the entire NTSC spectrum, And they don’t have any refresh issues: there’s never any motion blurring. If you have fast moving objects, a CRT is more than capable of responding to those. And they’re also quite affordable, especially these days”.

There are always tradeoffs of course: CRTs have a large desktop footprint, and can generate a fair amount of heat. “But from a color, refresh and cost standpoint, there’s absolutely nothing wrong with a good 19- to 22-inch CRT for these types of applications” Pollitt adds.

When plasma TVs debuted in the mid-1990s, they represented a new archetype in television design: flat, sleek and wide. They could be hung on a wall, like a painting. And just as the first mass-produced TVs of the late 1940s and ’50s once did before they were banished to dens and bedrooms, they helped to reintroduce the concept of the TV as the focal point of the upscale living room. And like early TVs they are expensive–a real luxury item.

In recent years though, plasma has had stiff competition in the flatlands battle from LCD monitors. LCD technology actually dates back to the 1970s (remember when digital calculators and watches began to first appear?), although by the mid-1990s, upstart plasma TVs wound up capturing the lion’s share of publicity and sex appeal. But because of the popularity of LCDs in the computer monitor industry, an impressive LCD manufacturing infrastructure has been built up, particularly in Asia. Since the start of the 21st century, to maximize investments in that technology, LCD manufacturers have also turned to producing televisions, dramatically lowering their costs in recent years.

LCDs fill a niche; plasma TVs cannot be produced in sizes smaller than 32 inches, and most LCDs are smaller than that screen size, so are perfect for desktop computing applications. Pollitt of Philips adds, “tests have shown than an LCD is easier on the eyes than a CRT. It doesn’t create as many negative effects over a long period of time”, because of the absence of flicker.

Matt Foust, regional sales manager of Princeton Graphics (www.princetongraphics.com) says, “in the past, when the contrast ratios of LCDs were not as good as they are now, there were some color differences” between LCD and CRT. “Nowadays, with contrast ratios going above 500 to 1 and 700 to 1, they’re able to change the settings inside the LCD display to avoid that problem. Technology has caught up.”

But Foust is quick to mention that older, and even brand-new, but inexpensive LCD displays can have poorer contrast ratios, such as 300 to 1, or 450 to 1, making this a key feature to check when buying, especially if you are using it for editing.

Buying an LCD monitor is becoming increasingly affordable. “Wide panel LCDs have traditionally been very expensive, but there’s a lot of good news on that front,” notes Pollitt. “There are three sizes that are coming into play at very, very attractive end-user price points. You’ve got the 23-inch and 24-inch wide displays. These are typically 1920X1200, so 2.3 million pixels. So you’ve got great pixel density and a 16:10 aspect ratio. Those products which were in the $1,500 to $2,000 space, are now in the $900 to $1,200 range.”

For those using LCDs as computer monitors, and/or in the video editing workspace, in addition to allowing for viewing of 16:9 HDTV footage without letterboxing, these monitors also make it possible to have multiple documents open side-by-side, making them highly flexible workstations. In the Philips line, these products include the 23-inch 230WP7 (which streets for around $1,200) and a 20-wide 200WB7, streeting for $499.

The CRT technology of standard TVs has worked effectively for over 60 years. But as Douglas Woo, president of Westinghouse Digital Electronics (www.westinghousedigital.com) once told me, “When you move to digital television and high-resolution displays, CRTs, while they can do it, are not going to be the product that carries that burden further into this century”. That doesn’t mean that a high quality CRT might not still be more than adequate for the task that you are planning to assign to it. It’s a very safe bet, though, that at some point, the successor for that particular display will be flat and thin.

But will it be LCD or Plasma…or even a soon to be released technology such as SED (Surface-conduction Electron-emitter Display) pioneered by Canon and Toshiba? Well, that’s up to you and the need your new monitor will fill.