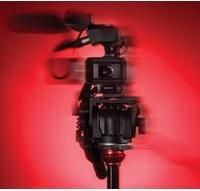 At best, a person is a very unstable bipod with two legs and too many moving parts that don't lock. A decent tripod will cost you a bit of money but it will save your shot. Let's look at the elements that make up decent camera support.

The inexperienced cinematographer may think most shots can rely on built-in stabilization. But, that usually results in video imagery that's more like sailing the high seas. That is why it's vital to get a good solid tripod. No matter how good you think you are, how light your footwork is, or how stable your video camera's stability feature claims to be, your audience is in for a bumpy ride if you rely only on handheld video use. Tripods will give your look a stable and fluid motion, keeping the audience firmly on dry land.

What to look for in a solid support system is critical. Start out by determining your needs for your tripod. Is it a studio shoot? Do you plan to shoot on location or even backpacking in the wild? The needs of the particular shoot can greatly determine what kind of support is necessary.

The rule of thumb for a tripod is the heavier the better. Heavy tripods tend to be more stable, which is important for panning and tilting. However, heavy can be a detriment when carrying a tripod on location. In this instance, a lighter tripod made from composite materials can provide similar stability, while easing the burden of carrying the tripod to a location. There are even some shoots when a simple "monopod" is all that is needed to grab a quick and stable shot that doesn't require a great deal of setup.

The type of legs and adjusters can make all the difference as well. Some tripods have spikes for outdoor use, enabling the user to dig the tripod into the earth. Others come with rubber shoes that grip the floor and keep the tripod from sliding. The best tripods have both. If the tripod has the ability to lock down onto a dolly, so much the better. It's also best to take a look at how high and low the tripod in question can reach. Reaching higher can give a bird's eye perspective, while lower ground level shots can provide stable, yet dramatic portrayals.

Adjustable legs can be a real advantage when shooting on uneven ground. The ability to move each leg up or down and then locking them down independently can help provide a level camera angle even in the most challenging of surfaces. You can make certain your shots are balanced with a tripod that comes with a bubble level, so you don’t have to "eye-ball" it and find out later that your shot is slightly off tilt.

The heart of a good camera support system, however, is the head. The head enables a camera to pan and tilt. And especially with the migration to high definition video, the smoother the movement the crisper the shot. Even a slight shake, which the untrained eye can miss, will easily show on a hi-definition screen.

True fluid heads are what give a tripod a professional tilt and pan. Fluid heads use a silky viscous fluid suspended between two plates and sealed against harsh weather and wear and tear. Many lower priced tripods will promise a fluid-like performance. Buzzwords like "fluid action" or "fluid effect" promise a somewhat simulated performance; however, that tends to mean that corners are cut in sealant and in the viscosity of the fluid. You may pay the price later as wear and tear cause grit and grime to make the head grind to a near halt.

The price tag for the real thing may be higher but the ongoing long-term results are worth it. An example of a light true fluid head is the Miller DS-5 Aluminum Tripod System, which consists of the DS-5 Fluid Head, DS 1-Stage Tripod and a mid-level spreader for cameras 5.5 lbs and lighter. The street price for the DS-5 System is about $750. Or the just-released Velbon FHD-51Q Fluid Head can be purchased separately and mounted on most screw-top tripods.The quick-release plate is large enough to accommodate camcorders with a load capacity of 5.5 pounds. Cameras can be mounted either forward or backward on the base, depending on whether they are lens-heavy or back-heavy for better balance. The head runs about $190.

The use of a flat-head or bowl-style head can also provide options when getting the shot. Flat heads rely on the tilt and pan features of the head itself, while a bowl-style mount can offer yet another angle for tilt and pan which doesn't rely on various cranks to get the shot, just slight pressure on the camera to any part of the axis. This can give great flexibility when trying to level the camera on uneven ground or odd angles. Bowl heads usually have a separate bubble level to assure that you have a straight shot.

Some tripods are so stable that screwing them onto the plate can simply lock the camera down. This is great for studio work, but not necessarily on location, if you need to grab a quick handheld shot. This is where a well-made quick release plate on the head comes in handy. With the release of a lock and the flip of a lever, the camera can hit the pavement for on-the-run shooting, then go back on the tripod without losing time locking it down. No story was missed in the process.

There are third party quick release plates available to add to a conventional screwing head, but it's important to be certain that the plate fits the camera. Some may impede using large telephoto lenses while others are too small to support larger cameras.

For those that want a more fluid, walking movement to their videos, stabilizing systems can be a welcome addition to one's prosumer camera kit. Whole setups, featuring vest, arm and sled, like the VariZoom FlowCam GT, can run about $3,000. Its design works much like its Hollywood cousin, which costs about ten times as much, but for smaller more lightweight ENG-style cameras weighing from two to sixteen pounds. Quick Release plates make for quick camera mounting and its articulated arm allows operator to quickly frame and follow the action. The vest distributes the weight of the entire system over the operator's torso and hips.

Steadicam JR is more entry level and less of a budget buster. At $899, it can be used with smaller, handheld, secondary cameras because it relies on a gimbal handle which becomes an extension of the cameraperson's own arm. Glidecam sells the 2000 Pro for less than $300 and VariZoom makes a host of stabilizing systems.

Body-worn camera support systems can really add sense of first person perspective to a shot. But make no mistake: the investment can be a hefty one.

In the end, a twenty-dollar tripod is only good for a twenty-dollar shot. Sure, you save money, but the results may cause you to go right back out and purchase a more expensive and more sturdily built tripod. Likewise, a thousand-dollar tripod may not only bust one's budget, but also be more than may be needed for the shoot at hand. That's why it's critical to assess one's needs by balancing budget with camera size, and the needs and locations of the particular project. In the end, tripods in the three hundred to four hundred dollar ranges will provide 95% of the capability of the more expensive variants for our smaller consumer and prosumer camcorders. So, unless there's a specific need, an affordable yet robust tripod is easily within anyone's budget.

And if a videographer has tripods to handle a variety of conditions with the same performance, so much the better.

[Sidebar: Doing it Yourself]

If your budget doesn't include all of the equipment you want, or if you are the type who enjoys the challenge of building, how 'bout a DIY project? The Internet has plans to design and build everything from tripods (using crutches for legs) to stabilization devices. We can't say how well these work, nor can we testify to how many more projects you'll bid when you show up to that "pro" shoot with a homemade 'pod. But you'll find plans for things like $14 Jr. to the homebuilt vest and arm rigs that are quite complex. Videographers can derive a sense of satisfaction from making a rig themselves. The Internet has lots of resources for doing it yourself, and homebuiltstabilizers.com is a great place to start.