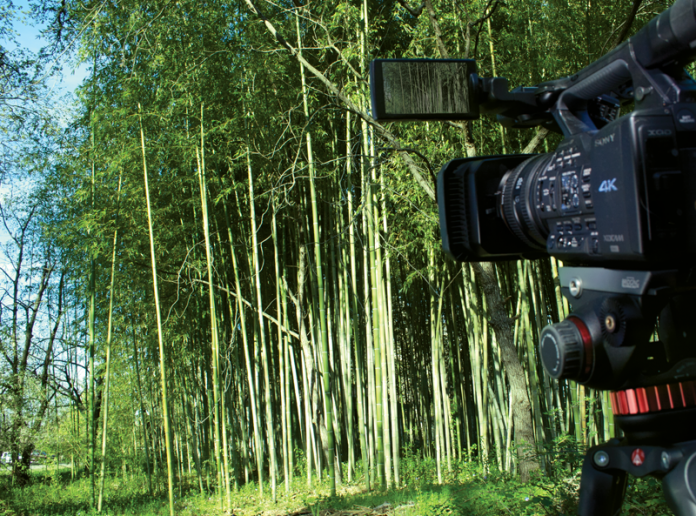 It was the philosophically ironic comedian, Steven Wright who once joked that "Everyone has a photographic memory. Some just don't have film." Thankfully, for those of us in the video world, the evolution of our tangible memories has come a long way. First, it was indeed film, then magnetic videotape, which gave way to digital formats and ultimately, HD. Within the past few years, electronics manufacturers have blessed the video world with 4K video, which in layman's terms, is the ultra-clear solution our memories dream about. There are infinite ways the video production community has integrated HD video, but only recently have producers been able to take advantage of the 4K resolution.

Video producers around the globe have found ways to upgrade to 4K video without downgrading their overall production output.

While the 4K video movement still has low adoption rates, the technology continues to come down in price and more resources are made available to both video producer and video consumer. Expect the integration rate of 4K video to gain traction in the months and years to come. Much like video progressed from analog, to digital, and HD video, 4K technology will carve out its place in the market and establish itself as the video format of choice for the distinguishing eye.

Thus far, the mass use of 4K has been relegated to macro formats, large 4K televisions, massive projectors, presentation screens, despite 4K resolution formats being offered in some consumer-grade camcorders, DSLRs, and some mobile technology. That said, video producers around the globe have found ways to upgrade to 4K video without downgrading their overall production output. Here are eight ways that video producers are utilizing 4K technology in ways you might not have thought about.

If there's one thing Ken Burns is known for, it's his ability to tell stories with stunning visuals. His documentaries have brought history to life, while beautifully capturing the brilliance of nature in countless films and documentaries. If you watch his series that aired in 2009, The National Parks: America's Best Idea, you can't help but become emotional as Burns and his team paint the picture of how America's national park system came to be. That said, Burns didn’t use 4K video to produce his work. With this evolving technology, it’s easy to draw inspiration from Burns’ work with film. By integrating 4K B roll into your projects, rolling time-lapses, rushing waters, amber fields of grain, capturing the beauty of nature should make your next video project an epic adventure that you’ll be proud to screen.

Stock Up on Stock Footage

Much like that one serving platter that only comes out during the holidays, having the right shot at the right time can mean the difference between delivering a video on time, or needing to invest additional time and resources into heading out and capturing a particular shot. By building up an inventory of 4K video footage of common subjects: cityscapes, weather shots, nature scenes, or traffic jams, your ability to expedite a project instead of experiencing additional production time will go a long way in developing your skills as a credible video producer. Plus, having a hard drive full of 4K videos at your disposal, much the same way you'd break out the rare flatware to impress Aunt Jennifer, will feed the masses and leave them asking for seconds … and might even earn some extra cash for you, too.

If you've ever been to a mega trade show, think of your local home and garden show on steroids, you've likely seen an example of how 4K video can draw in your attention. Marketers of companies from every industry imaginable understand the importance of showcasing their products and services in video. The really good marketers understand the importance of showcasing their products and services using 4K videos played on 4K TVs. Sure, the production costs can skyrocket when producing 4K videos, but the return on investment can be well worth it. If you've got a camera that allows you to produce 4K videos and you understand how a company can benefit from your services, prepare to start filling your schedule.

Key to Your Success

4K resolution rates offer greater flexibility when it comes to keying out a subject from a green screen. When using 4K technology to shoot green screen shots, your subject matter will key out cleaner, crisper and offer incredible range when needing to manipulate your footage in post-production. Similar to the way DSLR offers a great image sensor, 4K video resolution offers amazing clarity when you start adjusting the footage. When executed properly, 4K resolution allows users to deliver the same kind of chromakey quality found at network news stations using cameras and computer software that, in some cases, cost hundreds of thousands of dollars. The chromakey capabilities alone can be worth the investment in 4K technology.

Put the Motion in the Basket

Prior to 4K resolution, if you needed to add some motion to your footage in post, you'd likely lose quality in order to add pans, tilts, or zooms.

One of the beautiful qualities of 4K resolution is the innate capability to be tinkered with as far as the composition of the shot is concerned. If you've shot some amazingly picturesque nature scenes, but kept your hands off the camera, 4K video resolution puts the power of motion in your hands after the shot is locked and loaded. Ryan Brown, an independent film producer, talked with us about how the manipulation of 4K video completely changes the game when it comes to working with raw footage.

"I've been using lots of 4K footage in a 1080p timeline which helps with zooms, recropping shots and faking dolly moves," Brown said. "The 4K footage is very flexible. It's much easier to shoot in 4K resolution and then post out however your client likes. Basically it provides a lot more options and resolution than the other way around."

So, heeding Brown's insight, even if you come home with dozens of static, wide shots, if you shoot in a 4K video format, you'll have a basketful of options when it comes to putting together your video masterpiece.

Life can go by at lightning speed. One of the best things about shooting with a 4K camera is using the variable frame rates at which a camera like Sony’s PXW-Z100 can capture your content, which means you can take high-speed action and slow it down to speeds that would make a snail blush. High speed racecars roll to a crawl and the seemingly hypersonic wing flaps of a hummingbird can be dropped to pedestrian rates. Variable frame rate footage can truly add an amazing dynamic to your project, and having 4K video as the driving force behind this could be exactly what you're looking for with your next project.

In addition to slowing down fast paced action, water has a way of making waves when video craves variety. Whether you're watching the weather, or showcasing streams, there's something about the way water looks when it is slowed down. Trevor Wright, a producer with Plum Moving Media told Videomaker that stocking up on water footage can be incredibly useful, especially when producing content for clients that have an environmental message to share. "We would shoot from 24 fps to 300 fps. It was a very inexpensive way to capture slow motion, 4K resolution water footage, without renting an expensive camera. We now have a massive stock footage library of 4K video at 24fps to 120 fps of every kind of water."

When most video pros in the know think of a 4K camera, their mind shifts to high-priced cinematic, budget busting cameras. However, a few small, consumer-friendly POV cameras offer 4K video capabilities. Adding 4K cameras to your subject as they gallivant around your location could add that dynamic visual your standard point and shoot HD camera simply can't capture. Bill Dunphy, video producer for CMedia, said integrating 4K video into his projects has forced his team to focus more on the overall plan, instead of just shooting and reviewing once the content is in hand. "Since we are working with a larger image size, our framing, lenses, lighting and overall look for a production has grown in size, just like the format," Dunphy said in emails with Videomaker. "This means that we take more time to plan our shots. With a larger canvas we need to make sure what we do with it makes sense for the project."

Shooting 4K Video is One Thing …

The potential for 4K at this time knows no bounds. That said, being able to utilize the amazing visuals 4K video resolution offers takes significant capital investments to meet the technological demands of 4K technology. Often times, video producers need to downgrade their content to meet the technical specifications of their end users. Regardless of whether your final video output is HD, having 4K video footage in your possession will future proof your projects. From scenic nature footage, to visually arresting time-lapse footage that offers a truly unique spin on a simple cityscape, 4K technology offers limitless possibilities. The only thing left for you to do is figure out how you'll add to our list of ways to integrate 4K videos.

All of the video producers Videomaker talked to for this story referred to the amazing images they're able to capture with 4K footage, but also warned that there's more to the story than just the camera. Ryan Brown, who admits to being a die-hard Mac lover, said it best when he talked about how he handled his 4K transition, noting that it took switching allegiances to truly ensure his workflow was optimized for 4K technology.

I think the biggest thing in my case is all the 4K workflow needs. You don't just buy a camera and think you're good to go. You need to consider lenses, support systems, media. Also you need a computer that really can handle all the additional data throughput needs. It's probably a no brainer to some but you definitely need a way to offload onsite, and plenty of storage in the edit suite. Also you need to budget the whole expense before diving in. I soon realized that my MacPro Tower was not going to cut it. I invested in a Red Rocket card for speeding up the edit process. My biggest issue with the MacPro was expansion. Only 4 internal slots. After some debate I ended up switching from Mac to HP. The thing many don't realize is there are options and for me the best option was the HP Z820. It's full of processing power, endless amounts of RAM, plenty of slots to house all my I/O cards. It was like a breath of fresh air… I could finally spread my wings so to speak.

Dave Sniadak is the Director of Visual Communications at a Minneapolis-based marketing agency where he leads the production of video content for several Fortune 500 clients.