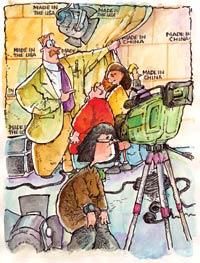 Television can befuddle even the smartest viewers. Stories on news programs may be disguised commercials for entertainment shows. Commercials designed to sell products may be more entertaining than the entertainments they interrupt. Docudramas dress up fiction as reality, and "reality" shows pretend to be as innocently truthful as raw home videos. And even when they’re not mixing genres, video programs can lie about the products you buy, the politicians you elect, and the values you subscribe to.


Meanwhile, children and teenagers (and many adults) sit there and soak it all up. Kids may be highly astute critics in telling quality programs from junk; but in telling fact from fiction, truth from lies, they have little or no training. If you’re a video enthusiast who’s also a teacher, a parent, a grandparent or a leader in a congregation, you can help teach young people to look at TV with the knowledge of how the medium can take you for a ride.


For simplicity, we’ll assume that you teach beginning video production, though the projects described here work just as well in English or social studies – or outside school in any organization that includes young viewers. We’ll outline four brief videos that can show how TV spins the truth: one each in news, sports, political ads and commercials. You can use each one as-is, or employ it as a model for topics more appropriate to your situation.

But first, a quick review of the tools that video uses to do its dirty work. (For a fuller discussion, see Liar, Liar in the October 2000 issue of Videomaker. Read it online at www.videomaker.com. You can find the Web access password on the Table of Contents of this issue.)


Omitting. You can leave inconvenient facts out of the program. The promo for the high school may feature its one new classroom building, but never show all the others that are dreary, cramped portables.


Excluding: You can omit things by keeping them out of the frame. So you choose a setup that frames the new building and frames off the tacky portables.


Scaling. Inside one of those portables, you can expand a cramped classroom by using only very wide-angle lens settings.


Suggesting. By shooting only in the one double-size portable classroom, you can imply that all the others are as big.


Compositing. To lose the portables, you can frame a wide angle shot, set up between buildings, of the athletic fields behind all of them. Then record a shot of the new building and key it alone into the background shot, eliminating the portables.


Juxtaposing. Shoot a student opening a door from the spiffy hallway of the new building and entering a room. Shoot a second shot from inside an old portable classroom, of the same student entering and closing the door. Cut the two together, matching action, and you’ve moved the old room to the new building.


Using some or all of these tricks, student production teams might shoot the projects suggested below. With beginning students, you may want to study these video scams in class before starting the exercises.


With more experienced teams, you might just give them the objective and turn ’em loose.

Suppose school authorities want to discourage skateboarding on school property (as they all do). The objective here is to create a feature for the school’s daily news program that seems to be a straight news report of a skateboarding accident, but is really an editorial against skateboards.


Since all accident stories are shot after the fact, send a standup reporter to the parking lot (or wherever) to describe the great tragedy for the camera. Load the report with stuff like, "Oliver Wigwam nearly went to the hospital today, after a life-threatening skateboard accident almost turned into a major tragedy." Have the reporter go on in this dire vein for some time to provide voiceover for cutaways and "wallpaper" footage:

Figure 1 – A wormseye closeup of an upside-down board with one wheel still spinning around.


Figure 2 – A close shot of the merry-go-round lights on a medic van or patrol car. (Shoot it at the firehouse, with permission, framing off the background.)


Figure 3 – A group of students standing and staring at the ground below the camera, apparently rubbernecking at the accident site.


Figure 4 – A school official doing the old, "move along, folks; nothing to see here; let’s break it up."

Then get a couple of interviews with students that expatiate on the evils of skateboarding without referring to this accident. "I knew this one guy who, like, knocked out all his front teeth." "My brother had a snowboard accident. He was in the hospital for a month.


Finally, interview the "victim," standing up, unmarked, and holding his skateboard: "Aw, it was no big deal; I fall off all the time.


First, show the raw footage to the class, then edit the feature with the reporter’s voice over the staged accident shots. Add the interviews, clipping the line in the second one so she says, "My brother… was in the hospital for a month." Finally, omit the interview with the victim entirely. Wrap it up with the reporter on camera: "So there you have it: skateboarding claims yet another victim. Trudy Trendy at the scene.

If you can get permission, send two crews out to cover a sports event. (Football and track meets work well, and tennis is okay. Soccer and basketball move too fast for good video coverage.)


The gimmick is, one crew is shooting for showing at the home team school, while the other is shooting for the visitors. Each crew wants to make its team look better than the other team, no matter who wins or loses.


With a football game, the editors of both features will select the footage that shows their team to advantage. When the other team scores, editors omit the action, substituting reaction shots of the crowd. Sideline coverage of our team features eager players on the bench, determined coaches giving decisive instructions to subs going in, and so-forth. Sideline shots of the other team show dirty, tired players back on the bench after heavy action, coaches staring glumly or tensely (and they always do, whoever’s winning), etc.


Finally, the voiceover commentary features "our" triumphs and explains away "our" mistakes. In the end, the winner’s feature blares, "Saddlesore High triumphs over top-rated Millard Fillmore!" The loser’s piece boasts, "Though hobbled by injuries and bad luck, Fillmore holds Saddlesore to a mere seven-point lead!

The trick here is to feature a candidate for class president without having him or her state any positions, make any promises, or, in fact, say anything at all except maybe a "vote for me" tag line. Have two or more teams and candidates do this.


Have each crew pick the school alma mater or whatever pop music’s in this week, and plan to cut the ad to the track. Then they get shots of their candidate being friendly with buddies, cheering at games (intercut faked closeups with real game footage), being listened to seriously by administration bigshots, cuddling a pet, or whatever sells the candidate as a Big Person On Campus and a great human being.


If you live on a coast or lake, have the People’s Choice walk barefoot in the sand at sunset. Hey, it worked for Kennedy!

The product is the school paper and the objective is to make it seem thorough, lively, interesting and worth reading.


Here the trick is lots of shots. Cut together different angles of a reader, overlapping the action of page-turning so a four-page rag seems to have 16 pages. Go for many, many, many tabletop closeups of headlines from sports, features, news, editorials (shooting them off-level, some headlines slanting down, others up) and cut them together into a very fast montage.


Include lots of pictures of recognizable students (stay away from faculty and administration). If the paper springs for just one color picture a year, feature it or use software and an inkjet printer to simulate a color picture with fragments of text around it and shoot that. Wrap it up with another montage of 10, 15, 20 students in every grade, deeply absorbed in reading the paper.


Here, it’s good to use library music, if you have royalty-free disks or software like SoundForge. A bright, surging "pulse-of-the-city" or "into-the-dynamic-future" music track will stitch together your montages and add a layer of urgency and excitement.


When students screen and compare their commercials, be sure to have actual copies of the paper on hand for a means of comparison.


So there are just four sample projects with the same teaching concept: sensitize students to media tricks by having them use those tricks themselves and then compare the results to reality. It won’t pull them away from the set, but it might arm them against its sneakiest tactics.

[Sidebar: How Video Can Distort the Truth: a Checklist]
Video can lie or distort the truth in several ways: