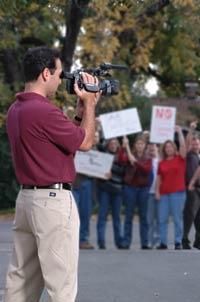 Penelope Andrews doesn’t think what she does is all that different from what documentary filmmakers have been doing for years. "When someone makes a documentary, it’s usually because they have something important to say. That’s the same thing we do."

It’s not exactly the same, though, mainly because Andrews isn’t an ordinary filmmaker. She’s a member of Headwaters Action Video Collective (havc.org) in California, which got its start in 1996 filming raucous protests over logging in the Headwaters Redwood Forest, about 250 miles outside San Francisco. The group continues to make videos on a number of different topics, joining a growing number of activists across the globe who use relatively inexpensive video equipment as a way to get the word out about a particular issue or cause.

With the existence and wider availability of digital video, this form of documenting protests is becoming more common. Erik Gernand co-founded the Atlanta-based company The Media Bunch (www.mediabunch.com), which makes videos for non-profit groups wishing to tell their stories. He says technological developments have given organizations and individuals more options for informing people about their cause of choice.

"With digital video, it is so much more accessible for people to tell these stories," Gernand says. "It wasn’t long ago that getting these messages out meant preaching or protesting or possibly print. Now there is a whole new door open. I think at the root of activism and protesting is the desire to communicate a message that you believe deeply. Digital video is just another tool to accomplish that effectively.

Digital cameras and computer editing programs also are relatively inexpensive, which makes them more accessible than more traditional filmmaking equipment, Andrews says. Where traditional editing equipment can cost anywhere from $20,000 to $40,000, any activist can easily be up and running for under $3,000.

The affordability is just one reason that those with a cause have turned to video as a weapon in their struggles. Many activists feel that mainstream journalists don’t present the full story on most issues, either because of time and space constraints, or because of pressure from their employers.

Andrews says video activists like her are more willing to delve into controversial topics than the mainstream media, because they have no one to answer to. "Most journalists and television producers are kind of gagged. They don’t have that much freedom because they have to tailor their stories to what their (company’s) owners can swallow."

Today, media outlets are increasingly owned by corporations, taking the focus off of what is best for the public, says A. Mark Liiv, co-founder of the San Francisco-based video activist collective Whispered Media (www.whisperedmedia.org). Liiv also is involved with the Video Activist Network, an informal association of activists using video to support various causes.

"What the media covers reflects the corporations’ main agenda of maximizing corporate profit, which outweighs their larger supposed social mandate of the unbiased distribution of news," Liiv said. "It would be much easier to connect these dots if the very people who are supposed to be informing us of the media oligarchy weren’t actually part of that oligarchy. And that’s where video activist groups come in. We’re looking to tell the hidden or ignored stories of people who are challenging this social and economic order which is mirrored in the ownership of the media itself.

A Passion to Inform

Many video activists took up the practice because of a certain incident or issue. For Headwaters Video Collective, the cause was what they perceived as the destruction of the forest that gives the group its name. For Liiv, the issue that spurred him and his co-founders on was the protection of Cove-Mallard in north central Idaho, which Liiv claims is largest wilderness area in the lower 48 states without roads.

"It was the name of the largest timber sale on United States Forest Service land in the history of the northwest and it was taking place on an area of incredible ecological diversity," Liiv said. "We wanted to save this place and we needed people to come experience it and see it first hand. We decided that we needed an outreach tool that went beyond brochures and lectures. And most importantly for us, and for Whispered Media, we wanted to educate people on what people could do and were doing to take action. They used direct action like road blockades, tree-sits and demonstrations on the site of destruction. We wanted to capture some of that and inspire people to take action.

It wasn’t a single cause that inspired Gernand and his business partner Brady Shierling to start The Media Bunch, but a desire to help a variety of groups to tell their stories. "We wanted to work with non-profit clients because we loved the opportunity to be a part of organizations that were actively doing something important," Gernand said. "Our goal was to offer them high quality media services at an affordable cost. Since we started at a time that digital video was becoming so popular, we were able to do that. For many of our clients, this is their first venture into using video. I think they’re finding that they can use this medium to get their story out. If it’s awareness, or education or something like fund-raising by using video they can let people experience the story first hand. It’s the next best thing to experiencing it in person.

Since Gernand and Shierling founded The Media Bunch in 1998, they’ve produced videos for a number of groups. Gernand said one project, for the Ball State University Wesley Foundation, involved his going to Northern Ireland and recording protests and other manifestations of the conflict there between the Catholics and Protestants. "We were able to put that video together to create a package that helped the Wesley Foundation get funding for the next year, as well as educate people back home about what was going on overseas."

Changing the Face of Activism

Like Gernand, Liiv feels that the growing popularity of digital video, camcorders and the like are changing the face of activism by allowing people to spread their message wider and significantly faster than they could before these technological advancements. But Liiv said video is changing the face of not only activism, but also news and entertainment as well.

"Digital video is making the high priests of broadcast production a little nervous these days because so many more people can pick up cameras," Liiv said. "We’re seeing the growing acceptance of so called amateur video on TV news and entertainment programs and we’re seeing the begrudging but inevitable move to the use of video in Hollywood. Certainly it’s been embraced by documentary filmmakers for years, but even in fictional storytelling it’s happening.

As technology continues to grow, it’s likely that protesters, activists and their brethren will find new ways to use it. And for those who use technology to tell their stories, this will give them more control over the information people get on their causes. "What I think is most exciting about video activism," said Andrews, "is now we don’t have to wait for the corporate media to grace the issue. We’re covering it ourselves.