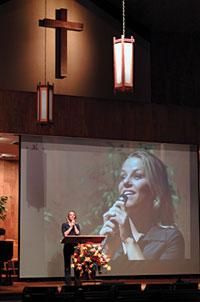 Houses of worship of every size, denomination and faith are discovering something you and I already know – video is a powerful communication tool. This may open a new area of participation for you. There are many opportunities to use video in the various areas of public religious life. There’s more to church video than popping a tape into a VCR and pressing play. The following tips will help you make videos that are practical, powerful and appropriate. For those who appreciate a good sermon, we’ve broken this message into three parts, all beginning with "P": Pick, Produce and Present.

To get you started thinking about how to use video in a worship setting, we’ve put together an inventory of many current applications. Some of these choices require more work than others, so plan accordingly. If these ideas seem new to you, start with one of the simpler uses and build on your experience.

You’ve identified an area you’d like to explore. Great! But before you dive into that project, take a few minutes to take into account who will see your video. Also think about the setting and atmosphere during the viewing. These items should shape the mood and content of your production.

All the creativity and production time in the world mean nothing if your audience can’t see or hear your video. That may seem obvious, but I’ve seen churches try to show a video to 300 people on a 25" TV – using the built-in speakers. Another common problem is actually getting the video to play – regardless of the playback system. Think these issues through before showing your video and you’ll maximize it’s impact.

There are many possibilities for video in worship. Experiment, but don’t be afraid of constructive criticism. Houses of worship are just now discovering this powerful medium, and anything new often raises questions in what can be a very conservative institution. A whole generation of church members have been trained to watch television from birth. Video can be a powerful tool to impact the folks in your flock, and it provides a great way for you to get involved at your church.