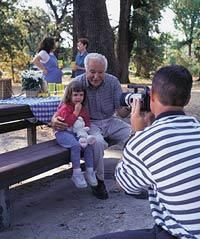 Are you having a hard time coming up with an idea for a video? Has your camcorder been collecting more dust than images lately? If so, it’s time to charge those batteries and get ready to shoot, because video opportunities are more prevalent than you may realize. There’s always something for you to shoot.

Why do most people buy camcorders in the first place? Ask a hundred people and you’ll probably get a hundred different answers. It all boils down to one thing though, preserving memories. We have the ability to playback in our mind’s eye the events of our lives and in so doing relive them. As time goes on, however, that playback becomes less and less reliable. Images blur and details fade. Put those events down on videotape though, and you can relive them by actually watching them over again. Videotape may not be a substitute for memory, but it can sure fill in the blanks that can develop in our minds as the years go on.

Special events – those significant to you – are particularly good video fodder. Let’s look into shooting special events. Hopefully, we’ll inspire you to grab your camcorder and start shooting.


Some special events are more obvious than others. Take, for instance, birthdays and anniversaries. These events are special because we choose to celebrate them with unique labels and distinctive rituals. They mark the milestones for a person or people and if that milestone is particularly great, these events may be even more meaningful.

Suppose you have chosen a birthday or an anniversary as a special event to record. You reach for your camcorder to document the occasion, but what exactly do you shoot? After all, a birthday or anniversary celebration could last several hours. Do you just put the camcorder on a tripod and let it run until the party’s over? Remember, this isn’t about surveillance, it’s about memory. When choosing what to shoot, think about what you believe will be important to remember. Here are some guidelines:

1 An event is the same as a story. It has to have a beginning and an end. Be sure to shoot the beginning and end of the birthday or anniversary celebration. This will provide framework for what you shoot in between.

2 Be judicious when shooting the "middle" portion of your party. Whether you are throwing the party or just an attendee, you probably have some idea about what’s going to happen while you’re there. At birthday parties, for example, there’s the singing of the "Happy Birthday" song, blowing out candles on the cake and opening presents. Those are key elements that you will definitely want to shoot. You may want to turn the camcorder off in between those elements and just enjoy yourself.

3 Try to keep your footage of your celebration down to thirty minutes or less. You’re not shooting Gandhi, after all, and you’re likely not going to want to relive any celebration for more than 30 minutes. Keep the length of your finished project in mind as you shoot.


These guidelines can be applied to other events, as well, which begs the question, "What else is there beyond birthdays and anniversaries?"

Holidays are also special events, by definition. They bring people together to mark a significant event. Holidays also tend to be a time for family gatherings, and family gatherings of any sort, be they holidays, reunions, picnics, etc. are outstanding opportunities to collect memories on videotape.

The trouble with gatherings such as these is that they have less formal structures than birthdays and anniversaries. That means that what happens in the middle is less predictable. What do you shoot in those cases?

During a family gathering, it’s the people that really matter. Some of those attending may be folks you haven’t seen in a long time, and may not see again for a long time to come. It would make sense, then, to point the camcorder their way and let the tape record a good look of those people.

Memories are auditory, as well as visual. As such, sound is just as important as video when recording a special event. Particularly in the case of family gatherings, you may want to record what people say, as well.

When you approach those individuals you’ve decided deserve special attention in your video, you should ask them to say a few words. Yes, a lot of people out there will whine and complain when a camera is turned toward them. You’ll find, though, that when asked to speak for posterity, most folks will become instant presenters, with orations that rival an Academy Award acceptance speech. The benefit to you, of course, will be not only having still pictures tucked away in a photo album of your cousin Louie from Kansas City that you see once every ten years, but having his words on tape for you to listen to and relive any time you want.


Dust Off That Camcorder!


The time to take your camcorder out of mothballs is now! Special events are waiting around every corner, just waiting to be documented for you to enjoy later. The great thing about them is that you can decide what is special, and give yourself any excuse you want – as often as you want – for breaking out the camcorder and shooting the events of your life. It’s fun, it’s personal and it’s a perfect way to save precious memories.